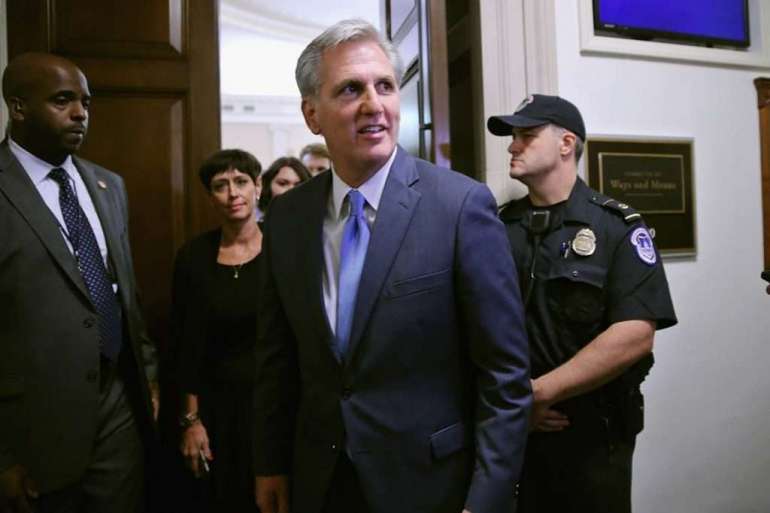 In the end, Cheney easily kept her job, while Greene lost her committee seats when Democrats insisted on holding a vote on her fate. But in the process, the California Republican made clear this week that the post-Trump GOP is a big tent — even if the party turns into a circus at times.

How McCarthy has approached this dual set of crises — with a mix of crowdsourcing and people-pleasing that has become a hallmark of his leadership style — offers a preview of how he plans to navigate what will undoubtedly be tricky internal GOP dynamics over the next two years. So far, he has emerged strengthened among his own members — though at what external political cost, if any, remains to be seen.

“I praise leadership for conducting this meeting and for allowing us to have our voices heard,” said freshman Rep. Nancy Mace (R-S.C.), who has been a staunch critic of Greene. “It’s really important to recognize that this is a second chance for all of us to move forward from this day going forward.”

But, she added: “I think we do need to reconcile what our party is going to be in the future.”

And even some of the lawmakers who didn’t see the Cheney outcome they hoped for struck an optimistic tone following Wednesday’s vote.

“We need to move on and work to win the majority,” said Rep. Jim Jordan (R-Ohio), a Cheney critic and co-founder of the conservative House Freedom Caucus. “The top priority now is to work together to stop the Democrats’ radical agenda.”

With his sights set on winning back the House — and with it, the prized speaker’s gavel — McCarthy is carefully trying to thread the needle between two competing and often overlapping factions in his conference: the Republican establishment and the pro-Trump wing.

But whether McCarthy’s push to unify the GOP will be more of a Band-Aid than a cure-all for the party’s deep wounds remains to be seen. Congress is still reeling from the deadly attack on the U.S. Capitol. Trump, who faces his second impeachment trial next week, promises to remain a major player in the party and has vowed to avenge himself against any defectors. The anger among Cheney’s critics isn’t likely to fade. And never-Trump forces are mobilizing too, with Rep. Adam Kinzinger (R-Ill.) forming his own super PAC to target the ex-president’s loyalists.

That means the intraparty battles could still turn heated as Republicans continue to confront uncomfortable questions about their future and past, particularly in the lead-up to Jan. 6.

And while McCarthy wholeheartedly denounced Greene’s offensive and incendiary remarks — which have included calling deadly school shootings a hoax and endorsing violence against Democrats — the decision not to exorcise her from the party could come back to haunt him in the weeks and months ahead. Democrats are already trying to yoke the entire GOP to QAnon as a central campaign theme in 2022, cutting ads on the topic and elevating Greene at every opportunity.

“They’re clearly very torn between embracing it and denouncing it,” Rep. Alexandria Ocasio-Cortez (D-N.Y.) said of the GOP and QAnon. “They don’t know what they have on their hands.”

When asked whether he thinks the GOP will now be able to function normally, Kinzinger said he wasn’t sure he had “a ton of confidence.” But he did say he was encouraged by Cheney’s resounding victory — even if it was on a secret ballot.

“I want to be part of a party that’s the party I joined, and that’s what we’re fighting for. And there’ll be differences in it and that’s OK,” Kinzinger told reporters in the Capitol. “We don’t have a litmus test, but I do want to fight for the fact that we’ve got to have an optimistic, forward-looking future.”

Prior to Wednesday’s closed-door meeting on Cheney’s fate, McCarthy hauled in members of his leadership team and some of his closest confidants: Cheney, Minority Whip Steve Scalise (R-La.), and Rep. Patrick McHenry (R-N.C.). They huddled in his office for roughly an hour to get on the same page and game out the upcoming showdown.

Then, in a cavernous auditorium in the Capitol Visitor Center, McCarthy pleaded with his members to keep Cheney on the leadership team and trust their judgment.

He also recalled when hard-line conservatives denied him the speakership in 2015 — a stinging professional setback, he said, that came in part because he saw how divided the conference was. That line of thinking, which was described by multiple sources inside the room, illuminates why McCarthy has been desperate to rally Republicans and turn their focus from internecine squabbling to reclaiming the House.

And in another sign he was eager to move on from the internal rift, McCarthy questioned whether a vote on Cheney’s fate was even necessary at the end, especially after several dozen members had already said their piece. But after five hours of an intense “family discussion,” the conference voted anyway; 145 Republicans threw their support behind Cheney, a big win for the conference chair — and for McCarthy.

“This Republican Party is a very big tent. Everyone is invited in,” a visibly jubilant McCarthy said afterward. “We continue to grow, and in two years will be the majority.”

McCarthy’s attempt at dousing the House GOP’s other raging inferno — the fate of Greene — turned up mixed results. He tried to prevent a floor vote on Greene by offering to reassign her to a different committee, but that idea was rejected by House Majority Leader Steny Hoyer (D-Md.).

So McCarthy chose not to punish Greene himself. Instead, he bashed Democrats for a “partisan power grab” and offered his members a new line of defense.

With McCarthy standing by Greene, some members at the meeting requested that leadership make their support — and unity — more official by actually “whipping this vote” on the Democrats’ resolution, said one GOP lawmaker. The following day, leaders put out a recommendation of a “no” vote. And just 11 Republicans crossed party lines to kick Greene off her committees; Cheney was not one of them.

McCarthy’s approach stands in sharp contrast to Senate Minority Leader Mitch McConnell, who has made clear the party should purge far-right extremists like Greene from the party. And McConnell hasn’t spoken to Trump since late last year, whereas McCarthy trekked down to Mar-a-Lago last week to make amends with the disgraced ex-president. But the Senate, where members are elected statewide rather than in what are often noncompetitive, gerrymandered districts, is a different beast than the more raucous House.

And the reality is that Greene is popular with the MAGA crowd and still has the backing of Trump. Notably, Greene received a standing ovation from half of the GOP Conference after she showed some remorse for her behavior behind closed doors. And McCarthy — who has remained in lockstep with his conference as it turned increasingly pro-Trump — is reluctant to alienate that wing of the party, which makes up a large portion of the GOP’s base.

Yet at the same time, the path to winning back the House runs through suburban swing districts where moderates and independents fled the GOP under Trump. McCarthy knew he couldn’t afford to let Cheney go down while Greene went unpunished, according to sources familiar with his thinking.

And ousting the highest-ranking Republican woman would have been especially disastrous optics after a record-breaking number of GOP women were just elected to the House.

“If we want to rebuild our party and rebuild the country,” said Mace, “we have to maintain seats like mine, swing seats and appeal to the rest of America.”

But sometimes, trying to make everyone happy can backfire. There was already some behind-the-scenes grumbling from the right flank that McCarthy went so hard to the mat for Cheney, while other Republicans were frustrated that they were forced to take Thursday’s tough floor vote over Greene.

When asked whether McCarthy should have just settled matters with Greene internally, Rep. Tom Reed (R-N.Y.) responded: “I guess how I would answer that is I’m a big John Boehner fan,” he said, referring to the former speaker, who dealt with his members in an upfront manner to avoid problematic votes. “And I miss John Boehner every day.”

Then again, Boehner stepped down as the House GOP leader in 2015 when the right wing of his conference orchestrated a no-confidence vote. And Kevin McCarthy — at least for the foreseeable future — is still in charge.