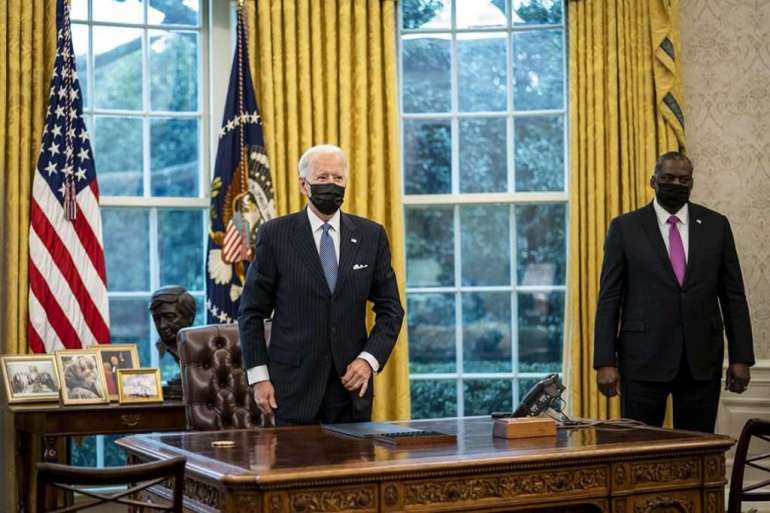 Ely Ratner, a longtime Biden aide and Asia expert who Austin tapped as his special adviser on China matters, will lead a task force of up to 15 members in a “sprint” effort dedicated to reviewing Pentagon policy on Beijing, according to the Defense Department.

The task force will provide Austin and Deputy Defense Secretary Kathleen Hicks its final findings and recommendations in the next four months. It will focus on strategy, operational concepts, technology and force structures, intelligence, strengthening alliances and partnerships in the region, and defense relations with China.

“It’ll require a whole-of-government effort, bipartisan cooperation in Congress, and strong alliances and partnerships,” Biden said. That’s how we’ll meet the China challenge and ensure the American people win the competition of the future.”

The announcement reflects a rare point of agreement between the Biden administration and that of his predecessor, which cemented the Pentagon’s shift in focus from the counterterrorism fights of the past decade to the Asia-Pacific under former Defense Secretary Jim Mattis’ 2018 National Defense Strategy. The Pentagon’s rhetoric against Beijing’s aggressive moves, particularly its military buildup in the South China Sea, sharpened significantly under Mattis and his successor, Mark Esper.

The Pentagon’s latest report on China sounded the alarm over Beijing’s rapid buildup of ballistic missiles, and estimated that the nation’s stockpile of nuclear warheads will at least double in size to more than 400 over the next decade.

Both Austin and Hicks made clear during their confirmation hearings that China will be a top priority.

Experts on both sides of the aisle applauded the announcement. Elbridge Colby, a deputy secretary of defense under Trump who has written extensively on the threat from Beijing, noted that “high level focus on China is key,” and urged Austin to build on the efforts of the previous administration.

Colby urged Austin to focus in the near term on getting the right weapons, particularly anti-ship missiles, to the force, and shifting resources away from the Middle East to the Pacific.

A crucial piece of the effort should be continuing to make clear that the U.S. will defend Taiwan from any potential Chinese invasion. The Trump administration increased arms sales and strengthened diplomatic relations with the island nation, which China does not recognize as independent, provoking China by approving several arms packages of advanced fighter jets, long-range missiles and Abrams tanks to Taipei.

“We need to laser focus on Taiwan, setting it as the standard for defense planning and prioritization,” Colby said. “Deputy Secretary Hicks was very clear on the point that the U.S. should be able to mount a denial defense of Taiwan in her [confirmation] hearing. DOD needs to make sure the United States can do so, alongside Taiwan’s own efforts.”