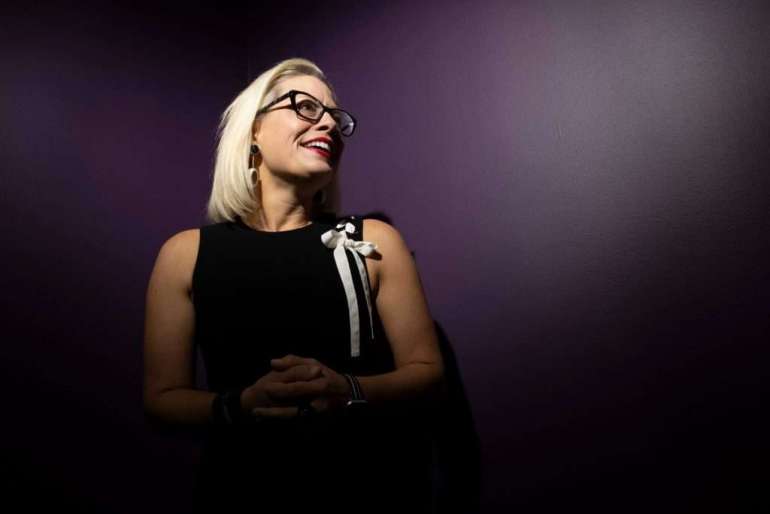 Sinema’s opposition is a blow to Democrats’ hopes of bumping up the federal minimum wage through budget reconciliation to avoid a GOP filibuster, complicating follow-through on a campaign promise from Democrats and President Joe Biden. And her defense of the Senate’s age-old rules is likely to frustrate progressives eager to use every tool at their disposal to advance their priorities in a Senate where one wayward Democrat can mean the difference between a policy breakthrough and utter failure.

Her breaks with her liberal colleagues are both a reflection of her state, which she won by a narrow margin in 2018, and her temperament. But the former state legislator, House member and now first-term senator has literally never served in the majority before — so she feels the minority’s pain.

It’s just one of the things that makes the 44-year-old Democrat one of the most quirky and interesting members of the stodgy Senate. She often wears a bright-colored wig to vote, drawing wide eyes from her colleagues. She waits for a single elevator most of the time, once peeking into a jam-packed vessel and declaring it a “Covid elevator.” The walls of her office are a loud purple, accented by leopard patterns.

And though she’s more attentive to Democratic Caucus meetings than she was in the minority, she still keeps Republicans at least as close as members of her own party. She was a pretty lonely Democrat during former President Donald Trump’s last State of the Union speech, standing and applauding at times. Now she talks to President Joe Biden’s team just about every day.

“She’s not someone who cares about convention and the way things were,” said Sen. Mitt Romney (R-Utah), a friend and ally. “She recognizes the real tradition of a Republic, which is that we are elected not to put our finger in the air to determine the direction of the wind.”

Despite being one of the youngest, and let’s face it, hippest members of the chamber, Sinema holds views that can be as old-school as any of the Senate’s long-timers’. Not only does she want to keep the filibuster, she wants to rebuild it. And the end-around idea of overruling the parliamentarian to jam whatever Democrats want to in a budget reconciliation bill is not going to happen on Sinema’s watch either.

“There is no instance in which I would overrule a parliamentarian’s decision,” Sinema said. “I want to restore the 60-vote threshold for all elements of the Senate’s work.”

Sinema’s stance largely aligns with Sen. Joe Manchin (D-W.Va.), another senator who has narrowed Democrats’ ambitions since they won the Senate last month. Their styles diverge from there.

Nikki Haley enjoyed the MAGA glow while avoiding Trump’s brash brand of politics. But in the aftermath of the Capitol insurrection, that position is becoming less and less tenable.

When Vice President Kamala Harris appeared in Manchin’s home state on TV pushing the coronavirus relief bill, Manchin retorted: “That’s not a way of working together.” Sinema was similarly unhappy, according to people that spoke with her afterward.

She decided to deal with it privately. She explained that people in her state “don’t really want me to spend my time weighing in on controversies or palace intrigue. They don’t care about that.” And attempts at trying to force Sinema’s hand will not go anywhere, she insists.

“It’s not effective to pressure me on anything. Because I am a thoughtful person who takes a lot of time, deliberatively, to make decisions,” Sinema said. “Once I’ve made a decision, I feel very comfortable with it. And it doesn’t matter what other people think.”

Already there are progressive groups itching to send her a primary challenger in 2024, citing her reluctance to gut the filibuster and for voting with Republicans on things like fossil-fuel regulations, barring stimulus checks to undocumented immigrants and approving some of Trump’s nominees. But Sinema also voted to remove Trump last year and last week helped advance party-line budget reconciliation efforts despite her laser focus on bringing in Republican support.

Sen. Chris Coons (D-Del.) has known Sinema since she was a state legislator. He isn’t surprised at the way she wields her influence as a U.S. senator “given how hard she had to fight to be relevant in an Arizona legislature where Democrats weren’t in the minority, they were in the super-minority.”

“She knows her own mind. And I think she’s someone who has an understandably self-confident assessment of her state and her place in it, her state’s place in our country and her role in her caucus,” Coons said.

As one of a handful of moderates in a caucus that may need lockstep unity to move Biden’s agenda, there’s plenty of political pressure on Sinema even if she chooses to ignore it. She and Manchin may have to be the deciding votes on Neera Tanden, Biden’s nominee to be White House budget chief and perhaps the toughest confirmation the new president will have to steer through the Senate in his first 100 days.

Tanden has little GOP support after her Twitter attacks on Republicans. But Sinema questioned her on policy during her hearing and has not yet done anything to indicate she might tank Tanden’s nomination. She said she’d also spoken to Tanden privately but declined to divulge where she is leaning: “I don’t preview where I am on votes. Ever.”

Colleagues chalk that up to Sinema’s contemplative nature. Sen. Bill Cassidy (R-La.), another GOP ally of Sinema’s that’s worked with her on family leave policy, said he learned a lot about her in late December as Congress struggled to clinch its last coronavirus bill. When Sen. Pat Toomey (R-Pa.) and Senate Democratic Leader Chuck Schumer (D-N.Y.) sparred over Toomey’s effort to restrict some of the Federal Reserve’s lending programs, “Kyrsten is sitting there listening, just listening,” Cassidy recalled.

“And finally she says: ‘They’re talking past each other but they’re saying the same thing,’” Cassidy said. “She almost brokered that by just listening.”

True to form, Sinema seems more interested in listening than opining at length on the issues of the day. She shuts down a question about how her views play with fellow Democrats: “Popularity is not my concern.”

During her Senate run, Sinema was a skeptic of Schumer’s leadership style, but she’s not delivering a verdict on his stewardship of the caucus: “You should ask Schumer how he’s doing as majority leader.” Even an innocuous question about her party’s direction is met with a brick wall: “I know this isn’t going to surprise you. I just don’t talk about internal stuff publicly.”

And that’s just fine with Democrats these days, who sense that Sinema is a team player regardless of her unique views. Just listen to her talk about passing coronavirus relief on what may be a party-line vote, and she sounds a bit like Biden: disappointed that Republicans aren’t yet on board, but confident it’s the right thing to do.

“Bipartisanship is always my first choice,” she said. “I also want to make sure that we’re getting stuff done for Arizonans. They need help … and I don’t want to see a process that gets bogged down in petty partisanship, like you did last year for much of the year.”