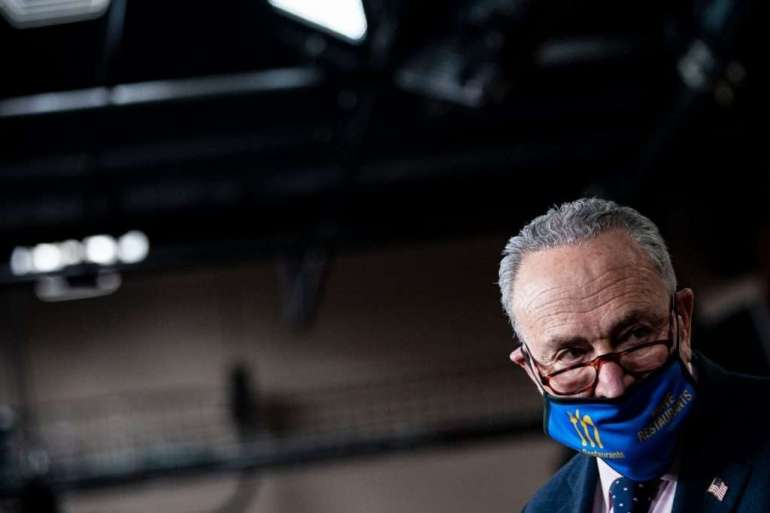 He said in an interview he worries that increased benefits could make it harder for employees to return to their workplaces, and that by the summer “there should be doors opening up, ready to go.” But Democratic leaders are still unconvinced about the change.

“They call it targeting, which means the sum total may not change, but the allocation of it may,” said Senate Majority Whip Dick Durbin (D-Ill.). “I don’t agree with them on the unemployment part.” Narrower targeting of the aid bill’s stimulus checks, Durbin said, “is being discussed.”

Democrats don’t have much time to fight about the massive Covid measure, with debate set to begin as early as Wednesday. Senate Majority Leader Chuck Schumer is vowing to send the bill to Biden’s desk before March 14, when boosted federal unemployment benefits will expire. The previous coronavirus relief package, which Congress passed in December, allocated $300 extra in weekly unemployment benefits to help with pandemic recovery.

A group of moderate Senate Democrats spoke with Biden Monday about the coronavirus relief package, and the president is scheduled to speak to the entire Democratic caucus Tuesday during their virtual lunch. Whether the centrists get their desired changes may depend on Biden’s conversation with the caucus.

Sen. Bernie Sanders (I-Vt.) said “the president believes, I believe, that the supplement should be $400.” But Manchin said he didn’t recall Biden taking a hard line and said that “Joe’s in a hard position because he’s got people beating him up all over the board.”

“He’s more inclined to let the process work,” Manchin said of Biden’s trust in Senate Democrats to work it out.

The U.S. Chamber of Commerce is endorsing the push to pare back Biden’s bill. “We need Congress to get the policy right with highly targeted aid for those most in need,” said Neil Bradley, executive vice president and chief policy officer for the Chamber, in a statement. “As currently drafted, the American Rescue Plan fails the test.”

Senate Democrats said Monday evening that they will need to make changes to the version of the coronavirus relief legislation that the House passed last week. That package included a provision that would increase the federal minimum wage to $15 an hour by 2025, which the Senate’s parliamentarian has said would violate the chamber’s rules if it remains on the legislation.

The Senate parliamentarian separately ruled Monday night that Democrats can keep health subsidies in the bill to help laid-off workers remain on their former employers’ health insurance. Democrats have drafted several versions of the bill to comply with Senate rules. Nothing has been finalized yet ahead of Senate floor debate.

Democrats are barreling toward a marathon voting session on the coronavirus package as soon as Thursday. Any senator can offer an amendment to the bill in what’s likely to become an all-night affair on the Senate floor.

Once the Senate bill is passed, the House will need to take it up again with the Senate-passed changes before Congress can send the legislation to Biden’s desk.

“There really isn’t a lot of dispute about the overall size of the bill,” said Sen. Angus King (I-Maine) on Monday. “The question is whether it can be targeted in such a way as to better serve the people who need the most and perhaps free up funds for other priorities.