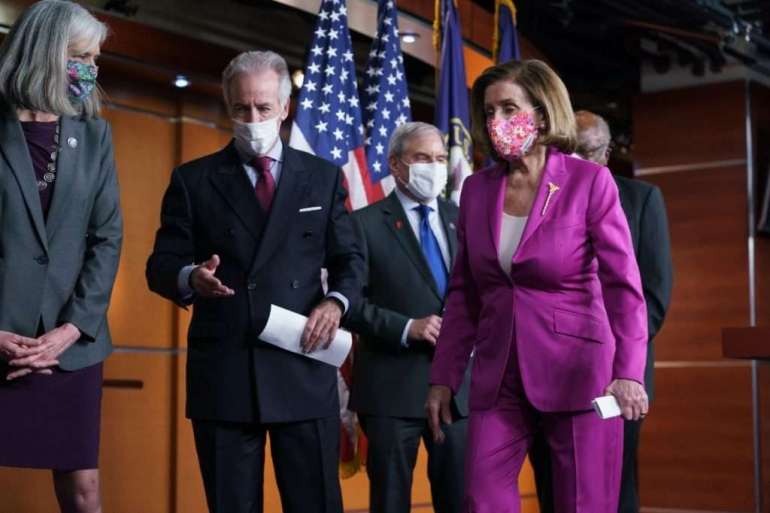 Biden is expected to sign the bill on Friday, aiming to prevent millions of Americans from losing boosted unemployment benefits that are set to expire over the weekend. The Democrats’ measure replenishes that $300-a-week jobless aid through Sept. 6.

The sweeping plan includes public health measures, including billions of dollars to shore up vaccinations and help reopen schools. It also includes a once-in-a-generation expansion of federal safety net programs, including a child tax benefit that amounts to a guaranteed income for families with children.

Now Democrats are moving swiftly toward messaging their win.

While the bill already has broad support with the American public, Biden and his congressional allies want to avoid the missteps of the Obama era, when some of the administration’s top achievements, including the Affordable Care Act, took years to gain widespread popularity.

Pelosi sent a “Dear Colleague” message to members shortly after passage encouraging them to “hold events” to communicate directly to their voters, as well as sending mailers back home “to help its benefits be understood and enjoyed.”

Nearly every Democrat backed the legislation, including progressives who remain furious that their party was forced to strip out one of its major policy goals from the bill — raising the federal minimum wage to $15 an hour. Top Democrats, including Biden himself, have vowed to make the minimum wage hike a priority for the rest of his term, though consolidating centrist support for the increase will present a challenge.

House liberals were also disappointed by some of the changes made to the bill by moderate Senate Democrats, led by West Virginia Sen. Joe Manchin. Among the Senate-passed tweaks is a weekly unemployment benefit boost that will end about a month earlier than what Democrats had initially decided on.

Golden was one of two centrist Democrats who voted against the bill during its initial House consideration. The other Democrat who previously voted no, Oregon Rep. Kurt Schrader, supported the Covid package on its return trip to the House floor Wednesday.

House Republicans remained in lockstep against the bill. House Minority Leader Kevin McCarthy described it as “the single most expensive spending bill ever.” (Congress passed a bipartisan Covid bill last year that was initially estimated to cost $2.2 trillion, a projection later revised to $1.78 trillion.)

“Pick your prisoner of choice. The Boston marathon bomber gets a $1,400 check in this bill,” Scalise said. He failed to mention that pandemic aid measures Republicans approved under Trump allowed the same payments to prisoners.

A group of conservatives took those complaints further by snarling the House floor Wednesday morning, forcing a procedural vote that’s poised to slow final passage of the Covid aid package — the latest use of delaying tactics that the right has looked to weaponize this year.

“I just made a motion to adjourn to stop Congress from passing the $1.9 trillion dollar massive woke progressive Democrat wish list,” Georgia Rep. Marjorie Taylor Greene, who forced the procedural vote, said on Twitter. “The GOP has messaged against this ridiculous bill. We should do everything to stop it.”

“I, quite frankly, think it’s unconscionable that they are doing everything they can to delay getting aid — including their constituents, who are in desperate need,” McGovern said.