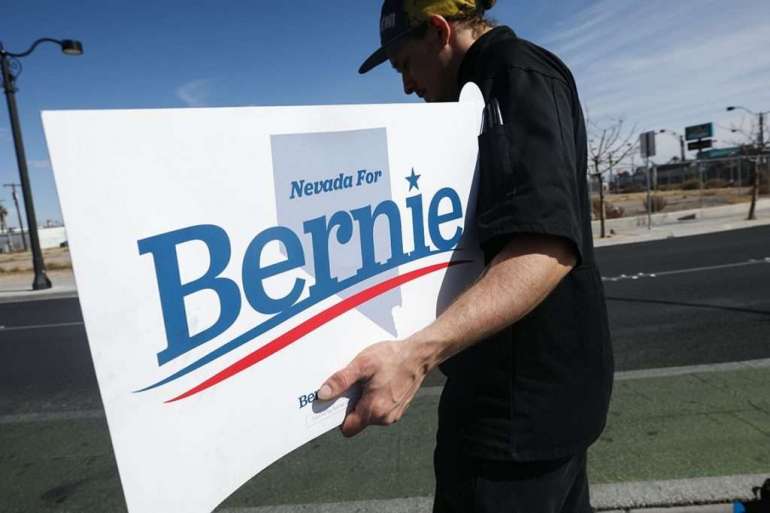 The takeover of the state party, aka the Reid machine, represents a dramatic turnaround from the 2016 presidential race, when Sanders fans were accused of throwing chairs and making violent threats at a wild convention in Nevada — charges they vehemently deny to this day.

It’s a development that could have effects that stretch well beyond state borders — and a sign that Sanders himself is playing a long game in the battle for control of the Democratic Party.

“It means that the progressive movement is getting stronger, that more and more people are getting actively engaged,” said Judith Whitmer, the new chair of the Nevada Democratic Party. “Instead of just walking away or saying nothing is ever going to happen, we’re just determined to make it happen. More and more people are feeling the same way around the country.”

In the near term, the upheaval in the party could have ramifications on the 2022 midterms — establishment-oriented Democrats are worried that what they consider to be a new and inexperienced team will be ill-prepared to take on Republicans next year in the swing state. The left insists it is ready. But there are also implications beyond the current election cycle for the progressive movement nationwide, and perhaps even the 2024 presidential election.

On Wednesday, Whitmer will meet virtually with Faiz Shakir, Sanders’ chief political adviser, according to people familiar with the gathering. Keenan Korth, campaign manager for the winning slate of party officers, will also attend. One immediate topic of discussion will likely be fundraising: Apparently seeing the writing on the wall, the state party moved $450,000 to the Democratic Senatorial Campaign Committee shortly before power changed hands in Saturday’s election.

“It’s basically a call to get an understanding of what they’re facing and what they need help with — support in the immediate term — and making sure they’re in a position to succeed,” said a Sanders aide who declined to speak on the record. “It’s a critical state for Democrats.”

The toppling of the state party has been years in the making. Whitmer, who was chair of the Clark County Democratic Party until stepping down this month, said she contacted the DSA two years ago about filling seats in the central committee, which is the body that elects the party’s officers. Sanders’ political operation also sent texts late last year to the senator’s supporters to encourage them to run for those seats in Las Vegas’ Clark County, the most populous county in the state, said several sources familiar with the effort.

Progressives who were active in pushing for new party leadership said the 2016 caucus was the catalyst that drove many of them to participate in Democratic state politics. Sanders lost narrowly to Hillary Clinton in the February caucuses, leaving some on the left ruminating that they could have won if they’d done more. At the bitterly contested state convention months later, where presidential delegates to the national convention were finalized, Sanders fans also left feeling that the Nevada Democratic Party had rigged the process.

“The leadership there in Nevada hijacked the process on the floor, created a tremendous amount of angst among people who were there attending the convention, who were supporters of Sen. Sanders, by ignoring the regular procedure and ramming through what they wanted to do,” said Jeff Weaver, Sanders’ then-campaign manager, at the time.

For its part, the Nevada state party lodged a complaint with the Democratic National Committee regarding the conduct of Sanders supporters and the “Campaign’s penchant for extra-parliamentary behavior—indeed, actual violence—in place of democratic conduct in a convention setting, and furthermore what we can only describe as their encouragement of, and complicity in, a very dangerous atmosphere that ended in chaos and physical threats to fellow Democrats.”

In a sign of how far the Democratic Party has shifted leftward in the state since 2016, even Whitmer’s opponent — who was recruited by Reid allies — is a well-known Sanders supporter. Tick Segerblom, a Clark County commissioner who said Sen. Catherine Cortez Masto contacted him about running, backed Sanders in 2016 and 2020. Sanders won the Nevada caucus last year in a rout.

“Truthfully, the other side out-organized us,” said Segerblom, referring to the party leadership elections. “I don’t say that just recently, but starting with the caucus last February where individual delegates to the county convention get elected. They were focused on that at that time. They then proceeded to take control of the county party.”

Explaining why he lost despite himself being a Sanders supporter, Segerblom said it was a story of outsiders versus insiders: “The Bernie grassroots people felt like they had been excluded going back to 2016, and so they wanted to change that. And so whether I was Bernie or not really wasn’t important. It’s that I am close to the governor and the senators and people like that.”

Shaun Navarro, co-chair of the Las Vegas DSA, said there were also larger forces at play in the weekend’s election results that are changing the state’s politics: “It’s a growing state. The state itself is changing. The electorate is changing: It’s moving more left because it is so diverse and there are so many people moving in from out of state.”

The 2022 midterms in Nevada will be one of the first major tests of the new party officers — and they will also measure the strength of the progressive movement writ large. The new guard believes that left-wing leaders and donors around the country see the fast-growing state as a huge opportunity and will invest financially in the party.

“We know that when it comes to 2024, if the party under our leadership has suffered losses in 2022, that that will undercut our ability to be successful moving forward,” said Korth. “The progressive movement nationwide is excited about Nevada and energized about the future of our party here and our organizing, and can absolutely be a critical component of our fundraising strategy to raise the $10 [million] to $20 million that the party is going to need to raise between now and November of 2022.”

The Reid machine is skeptical that the new leadership can win general elections, and it intends to stay as involved as it has always been — through independent expenditures and other outside groups. The old guard prided itself on being one of the most successful state Democratic parties in the nation, if not the best overall, with a record that includes electing both U.S. senators in recent years, cinching the last four presidential elections and taking control of the state legislature.

“What we have done is focused on winning and delivering Democratic victories up and down the ballot for the better part of 20 years and to see that demonized is hurtful on a personal level,” said Megan Jones, a former Reid aide. “But on a professional level, it’s short-sighted because I don’t think they know what they’re doing. And honestly I don’t know if they want to know what they’re doing, because these folks have been plotting against the state party and what they perceive as this power structure for the better part of four years.”

Whitmer said she is dedicated to reaching out to everyone in the state party — since her victory, she said she has been in contact with Cortez Masto’s team — and argued that internal divisions have been exaggerated. She also said she has “a 27-year career in project management, operations, logistics, managing multibillion-dollar projects.”

The change in leadership also comes as Nevada is looking to become the first-in-the-nation nominating state in the presidential race, something Reid has been pushing for aggressively. While left-wing and traditional Democrats said they were both committed to moving ahead of Iowa and New Hampshire, some are concerned that divisions in the state party could hurt their cause.

The state party staff quit after the progressive slate won, and Whitmer said the new officers were not immediately given access to social media or ActBlue accounts. (That has since changed, she said.) Both sides have also accused each other of attempting to put their thumb on the scales while filling vacant central committee seats.

The effort to go first in the presidential primary is not the only potential impact in 2024 and beyond, especially if Biden declines to campaign for a second term. Though the party officers’ terms are two years long, Whitmer said she is planning to run for reelection — and progressives say their efforts could make the state a more fruitful place for upcoming left-wing presidential candidates.

“I suspect that if we secure first-in-the-nation here in Nevada that any would-be progressive presidential contenders — it would make them all the more likely to get into the race because of the foundation we built here,” he said.

A Reid ally dismissed that notion, pointing out that the party does not run presidential primaries — unlike caucuses, which state Democrats are looking to axe in the future. “Part of the calculation to move away from the caucus is because we could see this coming,” the person said.