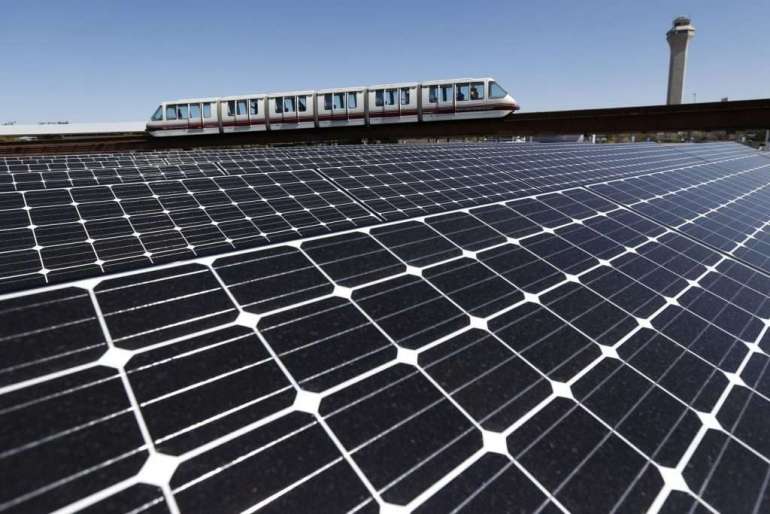 The industry also saw fourth quarter installations jump 32 percent year-over-year, even with a massive backlog of projects awaiting interconnection, and as utility-scale projects rushed to meet an anticipated decline in the Investment Tax Credit rate, the report said.

The two-year extension of the ITC, which was signed into law in the final days of 2020, has increased the five-year outlook for solar deployment by 17 percent, according to the report.

The solar industry has grown quickly over the past several years, even expanding while Trump administration enacted trade tariffs and lease rate hikes and criticized the technology as expensive.

President Joe Biden, meanwhile, entered the White House with plans to put the country on a path toward eliminating greenhouse gases from the power grid by 2035 and for the overall economy by 2050. Shortly after his inauguration, Biden signed an executive order that called for increasing renewable energy production on public lands and waters.

SEIA President and CEO Abigail Ross Hopper told POLITICO that the trade group is hopeful the upcoming infrastructure package will focus on tax credits for the industry, as well as help build out transmission and the electrification of the transportation system.

SEIA has had conversations with the Biden administration on infrastructure and tax credits, Hopper said, as well as on trade and policy initiatives to help domestic manufacturing in the U.S. The trade conversations have included both the White House and the United States Trade Representative.

Earlier this month, the Justice Department under Biden backed the Trump administration’s move to revoke a tariff loophole created for double-sided solar panels. In a filing in the U.S. Court of International Trade, the DOJ said the court should dismiss a solar industry complaint led by SEIA that challenged the import tariff move and argued that former President Donald Trump was “lawfully and fully within his authority” when he closed the loophole. SEIA declined comment at the time.

But Hopper said she did not see the Biden DOJ filing as a signal of wavering support by the administration, particularly as some of Biden’s political appointees were not yet in place. “My assessment is that the Department of Justice in making that filing was just continuing to enact the legal strategy it had [already] enacted,” adding that she did not see it as a “death knell to us.”

Instead, Hopper said the trade group’s most immediate, near-term priority is restoring “some certainty” around the Section 201 tariffs, which Trump raised in October to 18 percent from the 15 percent it would have been. Hopper said the group is also talking to the administration about the bifacial tariffs that were part of that same order but said it has evolved its conversations to focus on a “healthy solar supply chain,” rather than changing the percentage of the tariff.

“We don’t just go in and say, ‘Change the tariffs. Get rid of the tariffs. That’s all we care about.’ We say, ‘OK, let’s talk about how we have a sustainable, healthy solar supply chain,'” Hopper said.

The Biden administration, Hopper added, has been “receptive to the conversation.”

“I think they’re taking a look at the whole panoply of tariffs that our former president imposed, so the 201 tariffs that are solar-specific obviously being one of them, but [also] the Section 232 steel tariffs and the Section 301 tariffs from China,” she said. “So, my understanding is that there’s a holistic evaluation of all of these tariffs happening.”

“Between the cutting of the corporate tax rate and the economic recession, there’s obviously less appetite for tax credits,” she said. “Certainly, we have seen a constricting of that market, and so it is harder for projects to get financed, because there’s just not as many institutions out there with an appetite to do that. So we have been lobbying Congress since pretty much when this became apparent last year to have those monies be directly paid to the developer, instead of being a tax credit to an investor.”

Residential deployment was up 11 percent from 2019 to a record 3.1 GW, according to Tuesday’s report. But the pace of expansion was still lower than the 18 percent annual growth in 2019, as residential installations were affected by the pandemic in the first half of 2020.

A total of 5 GW of new utility solar power purchase agreements were announced in Q4 2020, increasing the volume of project announcements last year to 30.6 GW and the full utility-scale contracted pipeline to 69 GW. Wood Mackenzie is also forecasting 18 percent growth in residential solar in 2021.

“The report is both exciting in that we are poised to quadruple our growth in the next nine years. That’s a pretty amazing place to sit,” said Hopper. “And, even if we do that, we’re not on track to reach our climate goals. So it is both inspiring and provides a reality check about the need for more policies to allow us to reach those climate goals.”