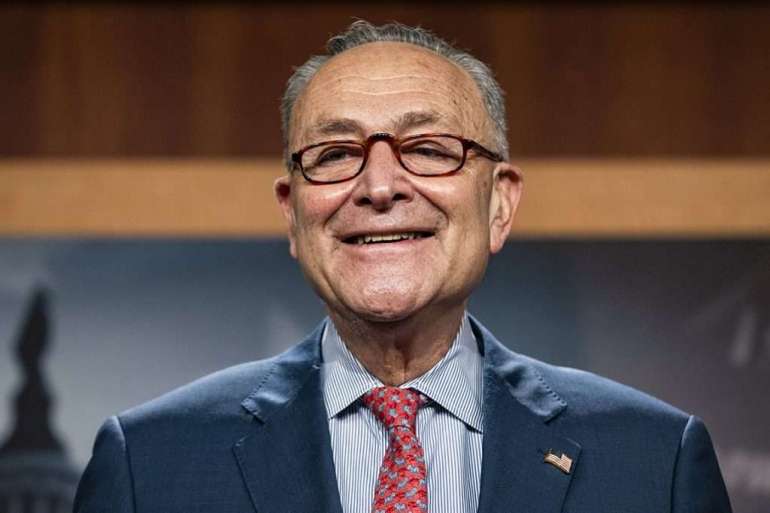 The personal stake he has in this political moment can’t be understated: After spending Donald Trump’s presidency leading a minority that was trampled by massive GOP tax cuts and three conservative Supreme Court justices, Schumer is seeking reelection next year as one of a trio of Democratic leaders who could rack up achievements rivaling FDR’s New Deal.

That’s if they can pull off their next, much more difficult legislative feat by plunging more than $2 trillion in new spending into the economy, while rolling back the Trump-era tax cuts. And Schumer is already selling the idea to his caucus and the American public.

Sustained and significant growth in jobs, wages and productivity “would change America,” Schumer said by telephone as he toured New York’s counties this week. “The sunny optimism of America would return and the sourness that’s in the land — because people worry about their futures — would dissipate.”

Of course, even with those tantalizing possibilities in front of them, Democrats have never been easy to lead. That’s why Schumer is trying to maintain momentum, knowing the risk of an internecine quagmire is always a possibility.

The Senate parliamentarian has signaled he may be able to avoid GOP filibusters several more times this Congress, which could allow him to pass multiple sweeping economic bills and rewire how majorities wield their power in the chamber. Whatever package he can pass is almost certain to include his electric vehicles plan, as well as his effort to enact hawkish policies toward China that Schumer sought fruitlessly in the Trump era, which has potential GOP buy-in as a stand-alone.

A political knife-fighter and sometime dealmaker, as majority leader Schumer speaks in confident generalities like “failure is not an option,” placating progressives and avoiding confrontations with his moderates. The word “bold” is never far from his mind as he plots course for a scrappy majority that lacks the votes to change the filibuster, yet is also united around delivering successes for Biden, as Sen. Joe Manchin (D-W.Va.) puts it.

Schumer was able to convince Manchin to take a partisan approach on Biden’s $1.9 trillion coronavirus law after much drama in the eleventh hour. But his next round of legislation will be more arduous than the emergency Covid package, which was turned around on a tight timetable due to expiring unemployment benefits.

“It’s gonna be a big challenge. Everyone’s gonna have different views,” Schumer acknowledged. “But the good thing about the Biden administration is they’re very receptive to listening.”

Already Manchin has panned the bill’s higher corporate tax rates and said there’s a half-dozen Democrats that want to reshape the broader proposal. Though Schumer has memorized White House chief of staff Ron Klain’s phone number and talks to Biden and senior officials frequently, rank-and-file Democrats who helped build Schumer’s majority want to have their say as well.

“Chuck does a great job of keeping a very disparate caucus together, you know, but we’ve all got different ideas,” said Sen. Mark Warner (D-Va.).

The centrist Warner said he hasn’t yet had the opportunity to help shape Biden’s plans. But the majority leader’s fingerprints are all over the Democratic agenda. Schumer was among the Democrats pushing Biden to scale up his coronavirus spending bill with more money for entertainment venues, states and cities and public transportation — all crucial for New York, and to his smooth path to a fifth term.

And during the campaign last summer Schumer began pushing his clean cars bill to the Biden’s campaign’s policy adviser. Once Biden won the White House in November, Schumer continued his lobbying to make sure that the president’s Build Back Better proposal included major provisions to phase out gas-powered automobiles, according to a source familiar with the interactions.

Schumer is “working tirelessly and capably with the full breadth of the diverse Democratic Caucus on historic legislation to defeat the pandemic and turn our economy around,” Bates said. Biden “appreciates their shared values and sees their relationship as central to restoring trust in government.”

At the moment, Schumer’s China and electric cars legislation seem popular enough to survive the next few weeks of haggling — among Democrats at least.

“There’s never a guarantee; I’m going to work hard to see. And I was gratified that the Biden administration included both of them. And I think they have broad support,” Schumer said. On the China package, he added, GOP Sen. “Todd Young is my sponsor, and he’s working hard on the Republican side, and we talk all the time.”

Young (R-Ind.) has a different view of the situation, warning Schumer not to put their legislation in a reconciliation package. Schumer has congressional committees working on their China legislation and hopes to produce a work product — and a floor vote — this spring. But if that fails, he could try to pass China hawk legislation unilaterally.

“Taking a partisan tax-and-spend proposal and adding a bipartisan bill does not make it any less partisan. While negotiating the Endless Frontier Act, Senator Young has cautioned all along that adding non-China provisions would end any hope of Republican support. Even his own,” a spokesman for the Indianan Young said.

When it comes to electric cars, Sen. Susan Collins (R-Maine) complains that Biden’s package focuses more on them than on “traditional infrastructure” like roads and bridges. To Republicans, she said, that’s a “signal that this is being used as a vehicle for parts of the Green New Deal, and massive policy changes, rather than modernizing and rebuilding our infrastructure.”

For Schumer that’s precisely the point.