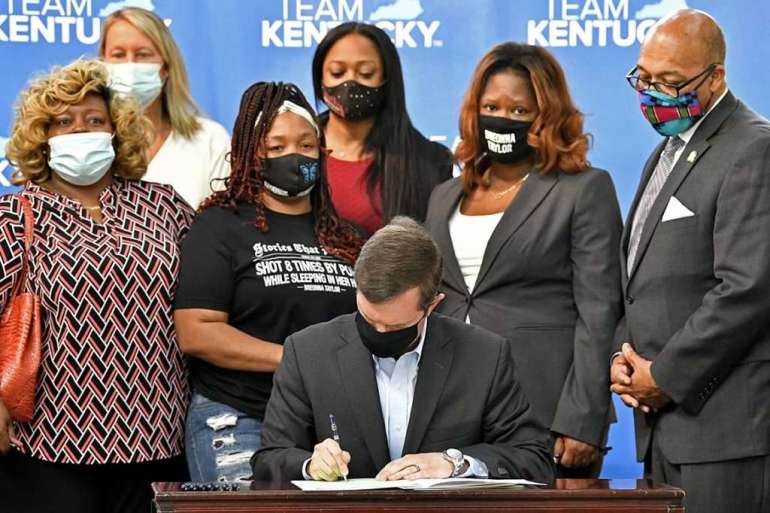 “This is meaningful change,” Beshear said. “It will save lives, and it will move us in the right direction. I know more needs to be done. I know the fight is not over.”

Members of the Taylor family stood behind the governor during the bill signing, at Louisville’s Kentucky Center for African American Heritage. Taylor’s mother, Tamika Palmer, shed tears as she accepted the pen the governor used to sign the measure.

“While it’s not the full legislation that they wanted in terms of a complete ban on no-knock warrants, they are satisfied that this is a start and a win in a deeply divided General Assembly,” said the family’s attorney, Lonita Baker.

Baker added that the family looks forward to working with lawmakers on future legislation to further restrict the warrants and increase police accountability.

Under the new law, no-knock warrants must be executed between 6 a.m. and 10 p.m. and officers are required to take additional steps to obtain warrants. Judges are also required to sign legibly when approving them and an EMT must now be nearby during execution of the warrant.

In the Taylor case, a no-knock warrant was approved as part of a Louisville Metro Police Department narcotics investigation. Nonetheless, officers said they did knock and announce their presence before entering Taylor’s apartment, though some witnesses have disputed that claim.

In September, a grand jury indicted one of the officers on wanton endangerment charges for shooting into a neighbor’s apartment, but none was charged in connection with Taylor’s death. That was based in part on the presentation of Republican Attorney General Daniel Cameron, who recommended no charges against the officers who shot into Taylor’s apartment.

One of those officers, Myles Cosgrove, was fired. Federal ballistics experts said they believe the shot that killed Taylor came from Cosgrove. The police department also fired officer Joshua Jaynes, who secured the warrant.

Virginia passed a ban on all no-knock warrants last year. The warrants are also not permitted in Florida and Oregon.