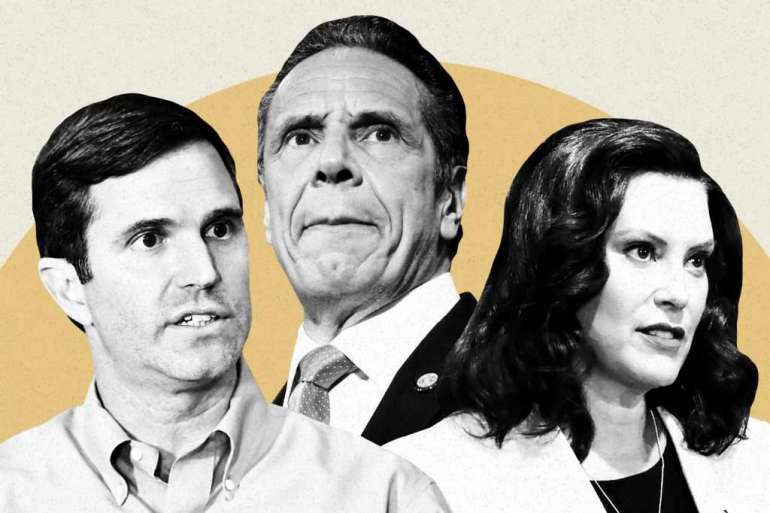 “We can’t leave it up to one person — no matter how much we like him or her — and everyone else who was elected has to sit on our hands,” Ohio Senate President Matt Huffman, who made the issue a priority after assuming the top leadership spot in January, said in an interview. “That’s not how it’s supposed to work in a republic.”

As former President Donald Trump took a hands-off approach to the pandemic, bristling at any sort of forceful restrictions on public life, governors across the country flexed their muscles and exerted themselves in ways unprecedented in recent memory as they battled Covid-19.

Many state leaders have long had extraordinary powers to respond to crises, in some ways exceeding the domestic reach of the president. The pandemic won them even more authority — and exposed the limits of their existing powers — as state leaders took steps that reshaped the lives of their constituents.

Most governors insisted throughout the crisis that they were being guided by evolving science and trying to navigate uncertain terrain as best they could. But patience appears to have worn out for many legislators consigned to the backseat.

Lawmakers in nearly every state in the country have introduced a combined 300-plus bills this year related to governor’s emergency authority or executive action taken during the fight against Covid-19, according to the National Conference of State Legislatures. Only a fraction of those measures are likely to ultimately move out of committee, let alone be enacted into law, but the bills nevertheless reflect the considerable interest in recalibrating governors’ emergency authorities.

In some states, it has been a continuation of philosophical differences that have played out over the course of the still-ongoing pandemic. That dynamic has been particularly evident in places sporting Democratic governors contending with GOP-controlled statehouses like Kentucky, Kansas and Michigan, where conservative outrage over Democratic Gov. Gretchen Whitmer’s pandemic mandates put her in physical danger last year.

But for other governors, it has been members of their own party who have been the ones trying to wrestle back control and deliver emphatic rebukes of their state’s leadership, as was the case in New York and Ohio last month. The move against DeWine marked the first successful override since the Republican took office in 2019 — and it came despite his pleading that the legislation “jeopardizes the safety” of residents and “handcuffs” the state’s capacity to respond to crises.

“It’s a bit of hyperbole to say people are going to die because of this because that presumes the legislature will collectively ignore that kind of risk,” Huffman said.

DeWine last week consolidated into one more than a dozen public health orders in order to “simplify” the rules for people, though he denied the changes had any connection to the newly empowered legislature.