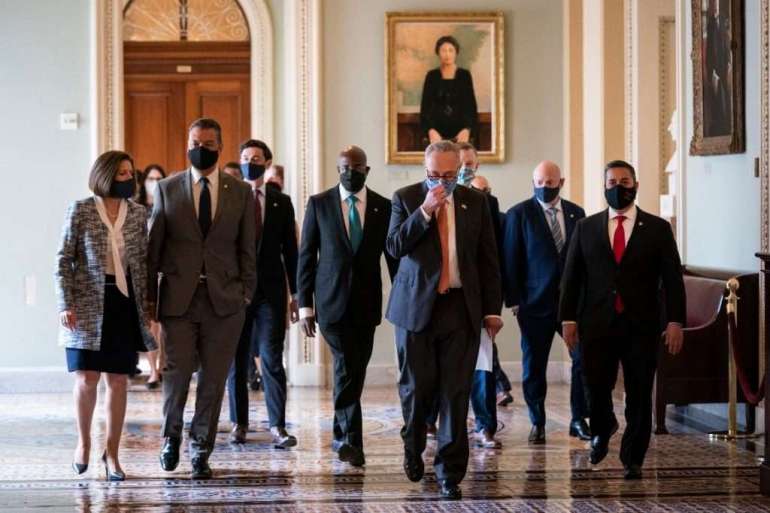 That spending — all revealed in recent campaign finance disclosures — spotlights a challenge many lawmakers are eager to tackle this month: how to update the strict rules that govern personal security costs for members of Congress.

“This is a very dangerous moment,” said Rep. Barbara Lee (D-Calif.), a senior Democrat who has long paid for her own security and, as a Black woman, has seen rising threats this year.

“We’ve got to be able to do our job, and not feel intimidated or harassed,” she said. “A lot of members who didn’t think about it before Jan. 6 are thinking about it.”

Top Democrats and Republicans are already in talks to offer more flexibility on how official funds can be spent as part of a massive, likely billion-dollar security funding package that is expected to be released within weeks. Under existing rules, lawmakers are limited in how they can spend their official budgets. Bulletproof vests and security personnel for town halls, for instance, are allowed, while security systems for a member’s home and bodyguards for nonofficial travel are typically not.

“It’s just crazy that we’re even having this conversation, but it’s the reality of what we’re living in,” said Rep. Tim Ryan (D-Ohio), whose spending panel oversees Capitol security funding.

The Ohio Democrat is one of many lawmakers pushing to be able to use official funds for a wider range of security purposes, rather than relying on campaign funds, which he said is “unfair” to put on donors.

“If you’re a governor of a state — that could be smaller than a congressional district — you get state highway patrol,” Ryan said, pointing out that when many lawmakers leave the Capitol, “you’re on your own.”

“I don’t care how they do it, as long as they do it,” said Rep. John Katko (R-N.Y.), who reported spending $19,874 on security this quarter after voting to impeach Trump. “You’ve got to keep people safe. That’s the bottom line.”

Much of the security expenses showed up on campaign reports within days or weeks of the Jan. 6 insurrection, where rioters stormed an ill-equipped Capitol and forced hundreds of members and staffers to fear for their safety.

Capitol officials moved swiftly to protect members and staff, shoring up the Hill complex with barbed wire fencing, metal detectors outside the House chamber and tens of thousands of National Guard troops scattered throughout the grounds.

Those threats weren’t confined to the Capitol, however: Senior and junior lawmakers alike were being chased down at airports or harassed outside their homes or district offices. Threats to harm members or their families were being dialed into many offices on a near-daily basis, with backlogs at Capitol Police headquarters to investigate.

Lawmakers did get protection from Capitol Police at D.C.-area airports when they traveled, but many said it wasn’t enough to feel safe, and they worried about their families while they were away.

Each congressional office was also given $65,000 in additional funds for security-related expenses this year. But in the long term, the issue is trickier than simply assigning security guards to every member: While it’s standard protocol for high-level administration officials, it would be far more difficult to outfit all 535 members of Congress with round-the-clock security.

One suggestion in an independent review of Capitol security, by retired Army Lt. Gen. Russel Honoré, was a “member allowance” fund to be used for protection such as residential security systems. Honoré also recommended a “threat-based” program to assign protective details for lawmakers outside of leadership.

Congressional leaders do provide personal security to lawmakers who face the most acute threats — including the nine House Democrats who helped prosecute Trump in his second impeachment trial earlier this year.

In addition to a protective detail in the Capitol, Rep. Eric Swalwell (D-Calif.) — one of the Democrats’ impeachment managers — spent well over $40,000 this quarter on security. The few months before that, he had spent under $100 per month.

“The speaker is working to try to find ways to make sure that any member who has significant threats can be protected,” Swalwell said, noting the ongoing discussions over how to use congressional funds to protect members amid “hundreds of threats.”

“The last place I’d want to take it is from constituents,” Swalwell said. “Drawing from campaigns isn’t ideal either. You almost incentivize people to threaten the most vulnerable on either side. That’s my fear.”

Details of some of these lawmakers’ security expenses had been first reported Friday by Punchbowl News.

It’s a delicate political issue, too. Politically vulnerable lawmakers from both parties say they fear that the use of official funds for security could be manipulated in attack ads back home, with state-of-the-art camera systems considered more of a home improvement project than a taxpayer necessity.

“I have mixed feelings about it. On the one hand, should taxpayers have to pay for what people could construe as improvements to our houses? I think I’d like to see it on the [official] side, but there has to be some kind of showing of needs,” said Rep. Susan Wild (D-Pa.), who already had her own home security system before this year.

In recent years, candidates have increasingly sought clarity from the FEC on whether they can, in fact, use their campaign fundraising for security purposes on the Hill or around their homes.

This January, all four congressional campaign arms petitioned the FEC to clarify its rules on the issue. By late March, the federal elections agency responded to one of those requests — which came from the GOP’s House and Senate campaign arms — to formally state that lawmakers can hire bodyguards with campaign money.

The FEC is also exploring more ways in which members may be able to spend campaign money on security for themselves and their families.

Ryan, who paid for a police officer to park outside his family’s home in Ohio earlier this year, said he isn’t sure how long the demand for more security will last, but was clear that it’s needed now.

“I mean, you have a metal detector right there, and we’re here,” Ryan said, pointing toward the House chamber.

“We protect generals. We protect other people in the government,” he added. “Unfortunately, we’re out and about so much that we need it, too.”