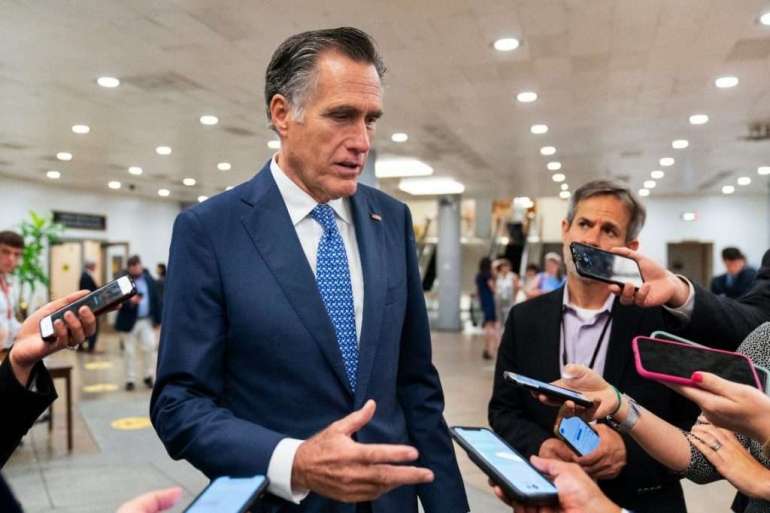 Sen. Mitt Romney (R-Utah), a member of a bipartisan negotiating group, said talks are “in the middle stages” but that he did not expect a deal before the Senate left Thursday. Sen. Jon Tester (D-Mont.) said the centrists don’t have an agreement but “we might,” listing remaining and long-held disagreements over spending numbers and how to pay for it.

“For some people it’s going to be plenty, for others it’s not going to be near enough. There’s going to be challenges for Republicans and Democrats,” Tester said. “The words [Republicans] use are: we have a general, total agreement.”

The negotiating crew of 10 believe they are nearing a framework they can present to Majority Leader Chuck Schumer and Minority Leader Mitch McConnell. Both leaders have kept track of recent talks.

The latest round of talks are perhaps the last chance for a bipartisan agreement before Democrats sideline Republicans and take a unilateral approach through budget reconciliation. Talks between Biden and Sen. Shelley Moore Capito (R-W.Va.) officially fell apart on Tuesday, though they’d been crumbling for weeks as Republicans and Biden remained hundreds of billions apart in spending and never agreed on a way to pay for it.

The senators in the group were mum on the details. Sources close to the negotiations said the number is $579 billion in new spending, and negotiators have discussed two timetables for spending the money, totaling either $973 billion over five years or $1.2 trillion over eight years. Those figures include current spending levels plus the $579 billion spending boost.

Proposals to pay for the package include indexing the gas tax to inflation and using unused Covid money. Some Democrats, such as Banking Committee Chair Sherrod Brown (D-Ohio), have dismissed raising the gas tax when the GOP is resisting more progressive tax increases on the wealthy.

A source familiar with President Biden’s thinking told POLITICO that indexing the gas tax to inflation would violate Biden’s campaign pledge not to raise taxes on people earning less than $400,000 a year and that the White House is not willing to include it in an infrastructure package.

“The President appreciates the Senators’ work to advance critical investments we need to create good jobs, prepare for our clean energy future, and compete in the global economy,” Bates said. “Questions need to be addressed, particularly around the details of both policy and pay fors, among other matters.“

One source close to the negotiations described the group’s strategy as a “bottom-up approach” and that “the top line will come from that.” But the source did not set a specific deadline to reach a deal.

Sen. John Cornyn (R-Texas), a close McConnell adviser, said the talks “have promise but it’s a work in progress.” And Sen. Roy Blunt (R-Mo.), who participated in the most recent GOP negotiations with the Biden administration, expressed skepticism.

“The advantage of the other group Shelley [Moore Capito] was working with was that it had structure. You had committee staff, those ranking members could probably bring most of their members,” Blunt said, adding he’d “be pleased to be surprised” but that he expected negotiations would end with Democrats plowing forward without bipartisan support.

President Joe Biden has sought a minimum of $1 trillion in new spending in previous talks with Republicans and progressives have grown more vocal about keeping climate and spending priorities in the plans. Biden is overseas, complicating the consummation of a global agreement between Senate leaders, the rank-and-file and the White House.

Sen. Joe Manchin (D-W.Va.) said he believed “things are moving in the right direction” but declined to otherwise characterize the state of play. Nonetheless, he was beaming as he left the Senate chamber for midday votes.

The negotiations come as progressives are growing increasingly impatient with the infrastructure talks and are urging Democrats to go it alone, citing the dwindling days on the legislative calendar and the crush of other items on their agenda.

“It makes no sense,” Rep. Pramila Jayapal (D-Wash.), who leads the Congressional Progressive Caucus, said of the current state of bipartisan talks. “It’s not going to change what Republicans have been very clear about… stopping any progress by the Biden administration.”

Sam Mintz and Sarah Ferris contributed to this report.