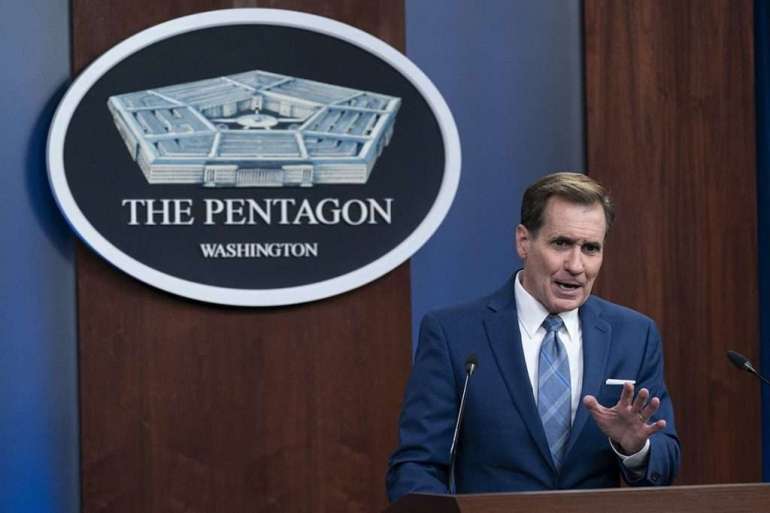 Taliban forces have taken over nearly 10 percent of Afghanistan in the last week alone, according to the Foundation for Defense of Democracies, and they now control 195 of the country’s 407 districts — while contesting another 129.

Responding to the Taliban’s latest evaluation on Friday, however, Kirby noted that “claiming territory or claiming ground doesn’t mean you can sustain that or keep it over time.”

Instead, Kirby renewed the Biden administration’s calls for Afghan security forces to take up the fight against the Taliban and safeguard the U.S.-backed government in Kabul.

It is “time … for Afghan forces to show the capacity and the capability that we know that they have,” Kirby said. “They are brave. They are fighters. They have taken a lot of casualties over the last year. And we know that they’re willing to defend their country. And we’re going to help them do that. But really, it’s their job to do that now.”

Kirby’s remarks closely echoed President Joe Biden’s speech at the White House on Thursday, during which the commander in chief sought to justify the drawdown in the face of bipartisan skepticism and escalating violence on the ground.

In that address, Biden also announced the U.S. military mission in Afghanistan would end on Aug. 31 — ahead of his self-imposed Sept. 11 deadline — and denied it was “inevitable” that the Taliban would seize total control of the country.

“The likelihood that there’s going to be a Taliban overrunning everything and owning the whole country is highly unlikely,” Biden said.

On Friday, Biden’s team doubled down on the denial that a Taliban takeover is inevitable in Afghanistan. Asked at her daily press briefing whether Biden had ignored U.S. intelligence reports that the Afghan government could fall within a matter of months, press secretary Jen Psaki said the president “of course” abides by the intelligence community’s assessments.

“But, the way the question was answered, and in part presented, was whether it was inevitable, and the president does not believe that it is inevitable,” Psaki said, referencing Biden’s remarks from the previous day. “The intelligence community has never said it was inevitable for the Taliban to take over the country, and so his objective — or, what he was trying to convey — was that there’s a responsibility, and the responsibility now lies in the hands of the Afghans,” she added.

The press secretary went on to emphasize that the U.S. government will continue to “equip and empower” the Afghan people, but that Afghanistan’s future is in its own hands now.

On Friday, Kirby conceded that “nobody can say with certainty” how the ongoing conflict will play out. But he agreed with the president in determining “that it’s not a foregone conclusion. And nobody should think it’s a foregone conclusion that the Taliban are just going to swiftly take over the whole country.”

The Afghan security forces are equipped with “modern weaponry” and have “had training and the ability to be in the field with American forces” for the past two decades, Kirby said. “They’ve got the capacity. They’ve got the capability. Now, it’s time to have that will.”