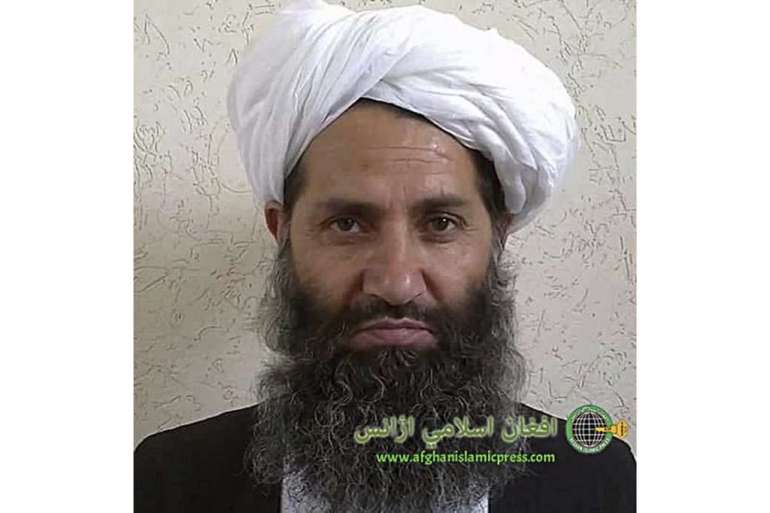 Washington’s peace envoy Zalmay Khalilzad, who is in Qatar, previously expressed hopes for a reduction in violence and possibly a cease-fire over Eid al-Adha.

Akhundzada said that “in spite of the military gains and advances, the Islamic Emirate strenuously favors a political settlement in the country, and every opportunity for the establishment of an Islamic system.”

The Islamic Emirate of Afghanistan is what the Taliban called their government when they ruled the country for five years, until their ouster by a U.S.-led coalition in 2001.

Still, there are few signs of a political agreement on the horizon. Battles between the Taliban and government forces are continuing in dozens of provinces, and thousands of Afghans are seeking visas in hopes of leaving the country. Most are frightened that the final withdrawal of U.S. and NATO troops after nearly 20 years will plunge their war-ravaged nation into deeper chaos. With the U.S. withdrawal more than 95% complete, Afghanistan’s future seems mired in uncertainty.

Militias with a brutal history have been resurrected to fight the Taliban but their loyalties are to their commanders, many of them U.S.-allied warlords with ethnic-based support.

This has raised the specter of deepening divisions between Afghanistan’s many ethnic groups. Most Taliban are ethnic Pashtuns and in the past there have been brutal reprisal killings by one ethnic group against another.

In a sign of how little progress has been made in negotiations, both sides are still haggling over terminology, unable to even agree on the name for the war-tortured nation. The Taliban are insisting on the Islamic Emirate of Afghanistan. Kabul wants the Islamic Republic of Afghanistan.

Meanwhile Akhunzada’s statement demanded an Islamic system without explaining what that meant.

He promised to support education, but for girls he said the “Islamic Emirate will . . . strive to create an appropriate environment for female education within the framework of sublime Islamic law.”

He didn’t say how that differed from the educational institutions that have been created over the last 20 years and whether women would be allowed the freedom to work outside their home and move freely without being accompanied by a male relative.

He said the Taliban have ordered their commanders to treat civilians with care and to protect institutions and infrastructure. Yet, reports have emerged from areas coming under Taliban control that schools have been burned, women have been restricted to their homes and some government buildings have been blown up.

The Taliban have denied reports of such destruction, saying that the footage being shown is old and accused the government of being engaged in disinformation and propaganda.