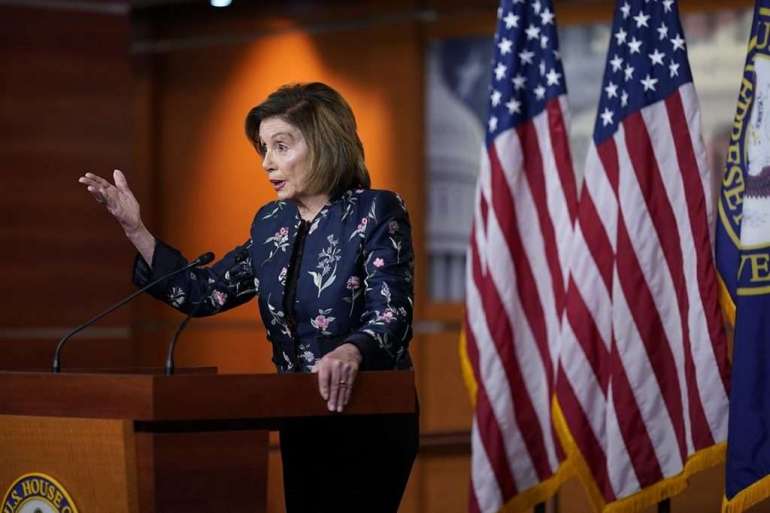 “They wanted to kill her. They were hunting her,” Rep. Karen Bass (D-Calif.) said. “I don’t think this is a political calculation at all. You’re talking about the greatest assault on our democracy in over 100 years.”

Pelosi huddled with the panel’s seven Democrats and sole GOP member, Rep. Liz Cheney, in her office on Thursday afternoon. A devout Catholic, she led the group in prayer before stressing the “solemnity” of their work ahead.

“The facts will take us where we go, not anything else,” Pelosi told the group, according to a source in the room.

Members of Pelosi’s inner circle insist that she doesn’t consider the select panel as legacy-defining work during what could be her final turn with the gavel. Instead, her confidants say, Pelosi feels like she was left with no choice after GOP leaders mobilized to block an independent probe and a separate Senate-led investigation was dismissed as too narrow, with virtually no discussion of Trump’s role.

But the most popular parlor game in Washington is guessing when Pelosi might finally exit the Hill after a storied two-decade tenure atop the Democratic caucus. And no matter when Pelosi and her two longtime lieutenants — Majority Leader Steny Hoyer and Majority Whip Jim Clyburn — step down, their responses to the deadly insurrection and its aftermath will shape their legacies.

“The answer of ‘we did no investigation’ is just not a legacy that anybody — forget about the speaker, but anybody, including Republicans — should be willing to live with,” said Rep. Jim Himes (D-Conn.). “It’s an overused word, but this is existential.”

Democrats close to Pelosi say although the speaker no longer engages in daily verbal combat with Trump, she still sees him and his loyal band of insurgent followers as a once-in-a-generation threat to American democracy.

And with Trump sidelined, Pelosi has been able to shift her focus away from countering his administration’s policies to shielding Congress from what she sees as his dangerous brand of politics, a clash with implications for the institution that will long survive her tenure.

“This is deadly serious,” Pelosi said Thursday, raising her voice and growing unusually animated as she explained her determination to move ahead with the select panel despite Republican protests. “This is about our Constitution. It’s about our country. It’s about an assault on the Capitol.”

Long before the riot at the Capitol, Pelosi has considered solemn duty to the institution as part of her leadership post. She has a long history working on national security, including years as the top Democrat on the House Intelligence Committee, and played a pivotal role in establishing the independent commission to study the terrorist attacks of Sept. 11, 2001.

Then came Jan. 6, when Pelosi and other party leaders were whisked from the floor just minutes before rioters broke into the House chamber. Back in her office, staffers cowered under tables as rioters angrily chanted Pelosi’s name outside a locked door.

“This is a serious moment,” said Rep. Barbara Lee (D-Calif.), who served with Pelosi during 9/11, the last event considered such a major threat to Congress’ safety. “She has to get to the bottom of this so it’ll never happen again.”

Pelosi stunned much of Washington this week by ridding the Jan. 6 select panel of a pair of vociferous Trump allies — Reps. Jim Banks (R-Ind.) and Jim Jordan (R-Ohio) — drawing fierce criticism from Republicans, who slammed it as the latest example of her overreach as speaker.

The move left Trump’s chief antagonist in his own party, Rep. Liz Cheney (R-Wyo.), as the sole GOP member of the investigation, although Pelosi hinted Thursday she might add more Republican representation.

Pelosi’s play this week infuriated McCarthy, the first House GOP leader during her nearly 20 years in power with whom she has almost zero relationship. Pelosi had a friendly rapport with former Speaker John Boehner (R-Ohio) and was cordial with former Speaker Paul Ryan (R-Wis.).

But when McCarthy comes up, she barely cares to hide the disdain in her voice.

“I’m not talking about him,” Pelosi told reporters when asked about McCarthy Thursday. “Let’s not waste each other’s time.”

The feeling appears to be mutual. When Pelosi called McCarthy to inform him of her decision to block Jordan and Banks from serving on the panel, she was met with “a wall of screaming,” according to a source familiar with the conversation.

A second source confirmed the call was tense but said both McCarthy and Pelosi had “raised voices.”

For both parties, this week was a reminder that Congress is still in the throes of a painful reckoning over Donald Trump’s hold on the GOP, as the former president’s influence only grows across the campus since his election loss. The resulting gulf between the two parties, and their leaders, has only expanded.

And it was yet another sign that Pelosi — who has already shepherded her party through two Trump impeachments — won’t hesitate to wage brutal combat with her political opponents, despite her party’s slimmest margins in decades.

McCarthy and his GOP members generally see Pelosi’s decision to veto two of their members as undermining the seriousness of the select panel. They argue that the speaker’s unprecedented step to pluck Trump’s biggest defenders off the GOP roster shows that the investigation’s mandate is chiefly to fight the former president.

“She was going to go forward no matter what,” said Rep. Tom Emmer (R-Minn.), who leads the GOP’s campaign arm. “I think that takes away any credibility from this partisan charade.”

And the sight of a mostly Democratic select committee had some of the most vulnerable members in Pelosi’s caucus whispering about the potential fallout ahead of a brutal midterm election.

But Democrats close to Pelosi dismissed those concerns, saying the 2022 election will be won or lost on the state of the economy and not anything else. Those Democrats say it was McCarthy’s decision to reject the Sept. 11-style probe that doomed cross-aisle cooperation from the start.

Several Democratic committees have already launched investigations into the Jan. 6 riots, hauling in witnesses such as the Capitol police watchdog and the FBI director. Those probes have already revealed glaring gaps in campus security, with big implications for Capitol law enforcement, perimeter fencing and management going forward.

But Pelosi and many Democrats insist a full investigation — a separate committee with its own resources — would uncover new details about exactly where order broke down and how Trump and his GOP allies fueled the violence at the Capitol. Democrats on the panel are already considering witnesses such as McCarthy himself.

“I think she wants to show a clear contrast between a serious leader, a serious party that is serious about governing, and this unseriousness on the other side,” said Rep. Eric Swalwell (D-Calif.).