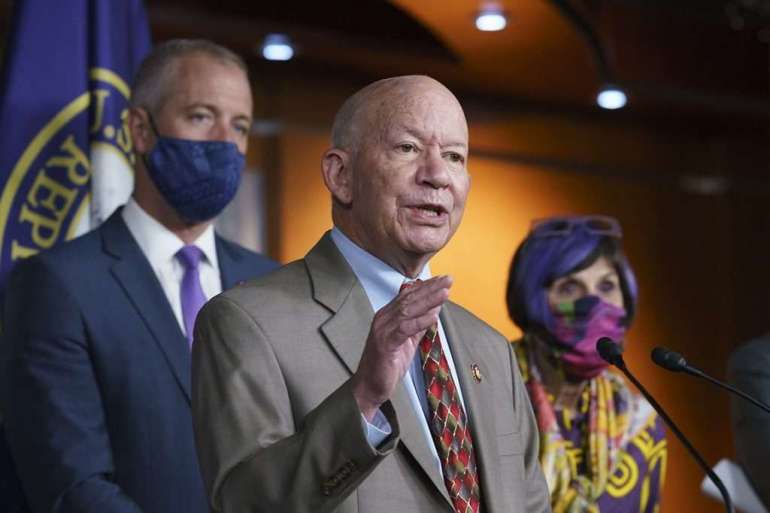 House Majority Leader Steny Hoyer also made a forceful pitch on the call, urging Democrats: “Remember the psychology of consensus. We’re in this together, led by the President,” he said, according to people who dialed in.

The centrists’ threat against the budget is the latest iteration of a long-running tug of war between moderates and progressives in the Democratic Caucus. And with just a three-vote margin in the House, that rift could tank Biden’s entire domestic agenda if Speaker Nancy Pelosi and her leadership team can’t bring their caucus together — with several other high-stakes deadlines looming in the coming weeks, such as government funding and the eviction moratorium.

At least 11 Democrats — including nine who signed a public letter led by Rep. Josh Gottheimer of New Jersey — have told leadership they won’t support the budget resolution unless Pelosi brings the Senate infrastructure bill up for an immediate vote. Given unanimous Republican opposition, Democrats can only lose three votes on the floor and still pass the budget resolution. So far, those moderates won’t back down.

Pelosi is refusing to give into their demands, going so far as to dismissively refer to the public pressure campaign as “amateur hour” in a private leadership call Monday night. On Tuesday she took a different tack, mostly deferring to senior members of her leadership team to convince Democrats about the importance of sticking together on the floor next week.

The House is planning to return Monday night for a critical vote to advance several of Biden’s priorities, Hoyer said on the call. The vote on the rule — which governs floor debate — will allow Democrats to move ahead on the Senate’s infrastructure deal, the broader party-line package and a separate voting rights measure.

The House is then expected to vote on passage of the $3.5 trillion budget framework and voting rights legislation Tuesday. But Pelosi has no plans to bring the infrastructure bill up for a final passage vote next week, despite moderate demands, maintaining she won’t do so until the Senate approves the massive social spending package through reconciliation.

The White House also went on the record Tuesday to say Biden “strongly supports” Pelosi’s plan to combine the rule for the three bills next week.

“All three are critical elements of the President’s agenda, and we hope that every Democratic member supports this effort to advance these important legislative actions,” White House spokesperson Andrew Bates said in a statement.

Pelosi delivered a note to her members later Tuesday night, clearly warning that any delay in approving the budget “jeopardizes the once-in-a-generation opportunity” to enact Biden’s broader legislative priorities.

It’s unclear when both chambers would be ready to vote on that final Democrat-only package, which will be passed using special budget powers that only require a simple majority vote in the Senate. Gottheimer and other centrists have argued that could take months — which would also delay the bipartisan infrastructure deal — though DeFazio and other Democrats have suggested that lawmakers’ real deadline is around Sept. 30, when Congress will need to reauthorize certain transportation programs.

In the meantime, Pelosi has essentially dared moderate Democrats to bring down the budget resolution, which is the key to unlocking the filibuster-proof reconciliation process in the Senate.

Pelosi and other top Democrats are counting on public pressure to influence reluctant moderates, thinking they would not want to be responsible for tanking a sweeping spending framework that includes a host of Democratic priorities, including universal pre-K, paid family leave, Medicare expansion and action on climate.

But some of those moderates privately argue that their resolve has only hardened after Pelosi’s comments on Monday night, as well as Biden’s glaring failures in Afghanistan that they believe have heightened the need for a domestic win.

Monday night’s vote will include one more pressure point for moderates: If they vote against the rule, they’ll also be blocking the consideration of a broadly popular voting rights measure. The bill, named for the late civil rights leader Rep. John Lewis, would shore up several legal protections once guaranteed under the Voting Rights Act that have since been dismantled by the courts.

“These bills will be critical to whether we come back to this House after next year’s elections in charge,” House Majority Whip Jim Clyburn (D-S.C.) said of the voting rights bill on the call, according to people listening.

While Pelosi, Hoyer and Clyburn are taking a risk by essentially calling Gottheimer and other’s bluff, they also aren’t leaving much to chance. Behind the scenes, senior White House aides such as Shalanda Young and Brian Deese, as well as Cabinet officials, have started contacting reluctant Democrats to convince them to back the budget resolution.

Privately, many Democrats believe the White House’s more forceful hand — in addition to further coaxing by House leadership over the next few days — will be enough to convince most of the skeptics before the vote next week.

“It is essential that we show results,” Pelosi told her leadership team Monday night. “Biden’s agenda needs to show the results that we know it can produce.”