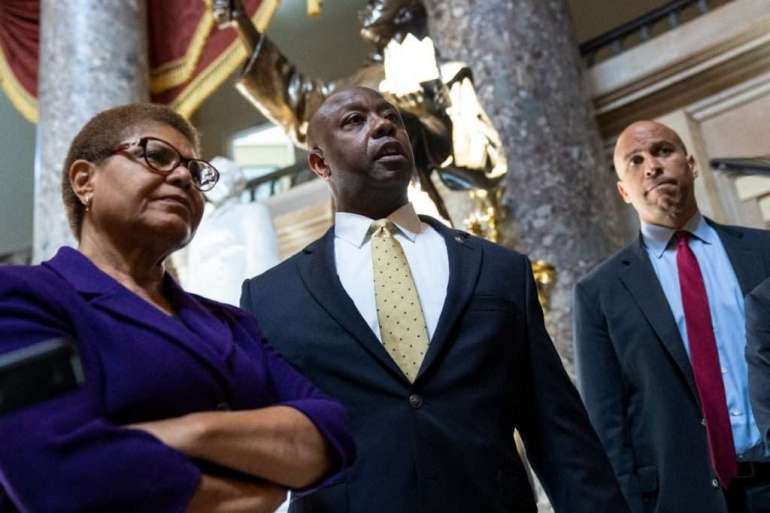 The New Jersey Democrat added that negotiators weren’t even able to codify an executive order from former President Donald Trump that offered guidelines for law enforcement and created incentives for local police departments to demonstrate they met certain standards for the use of force and de-escalation training.

Scott, meanwhile, blamed Democrats for walking away from the talks and said that he had tried to introduce a compromise bill, but Democrats rejected the idea.

“After months of making progress, I am deeply disappointed that Democrats have once again squandered a crucial opportunity to implement meaningful reform to make our neighborhoods safer and mend the tenuous relationship between law enforcement and communities of color,” Scott said. “Crime will continue to increase while safety decreases, and more officers are going to walk away from the force because my negotiating partners walked away from the table.”

Jonathan Thompson, executive director and CEO of the National Sheriffs’ Association, echoed Scott’s sentiments that the talks should continue. “We appreciate the desire to have a concrete position, but we can find common ground and will remain committed to doing so,” he said.

The failed bipartisan negotiations almost certainly close the door on police reform this Congress, absent changes to Senate rules. Earlier this year, the House passed a sweeping police reform bill named after George Floyd, a Black man who was killed by a Minneapolis police officer last year. But that legislation has no chance of getting 10 Republican votes in the Senate.

While the talks came to an official end Wednesday, few were surprised. The negotiations appeared to reach an impasse over the summer. Booker previously circulated draft legislation that addressed qualified immunity, but GOP lawmakers and some law enforcement groups said it was a nonstarter.

“It wasn’t like there was a big rupture,” she said. “But at a certain point, you have to recognize that you’re just spinning your wheels.”

Bass called on the Biden administration to step in and take action to reform policing “to the full extent they can.”

“Whether that’s an executive order, whether that’s issuing instructions, whatever they can do, we need the administration to act now, because we don’t have any particular faith or hope that we will be able to get reforms passed,” she said.

Last week, the Justice Department announced a series of reforms for federal law enforcement overseen by the department, banning the use of chokeholds and no-knock entries for officers unless use of force was authorized. Police reform negotiators had attempted to include similar reforms in their legislation, though their provisions would have included a broader range of law enforcement.

The Wall Street Journal was the first to report the end to the police reform discussions.