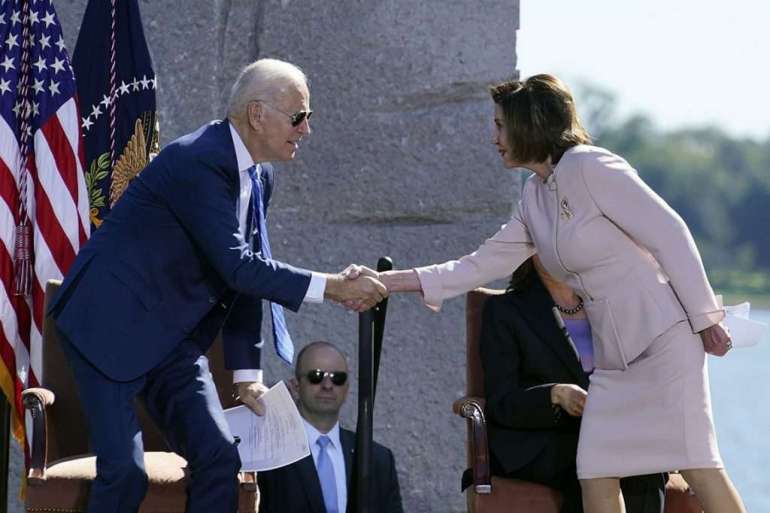 “There are many decisions that have to be made, but more than 90 percent of everything is agreed to and written,” Pelosi told reporters after the House’s final votes of the week Friday.

“We are an exuberant party with many points of view, and we’ll build our consensus and we’ll get this done.”

Senate Majority Leader Chuck Schumer also dialed into the Pelosi-Biden breakfast from New York, according to a source familiar with the meeting. Though Manchin said the party still has work to do as he left the Capitol on Thursday — and has indicated to associates he is in no rush to finish a deal — talks between Sinema and key Democrats have been intensifying.

Those negotiations, between the White House, Manchin and Sinema, are largely the final hurdles to a deal, according to Democratic sources.

“The conversations continue,” said House Ways and Means Committee Chair Richard Neal (D-Mass.), who has been negotiating at length with Sinema and the White House.

“We agree on the policy outcomes. Now we just have to find a path on the revenues side,” Neal said. “This is the ninth inning.”

Democrats are aiming to sell Manchin and Sinema on a roughly $2 trillion bill that tackles climate action, expanding paid family leave, education and childcare, paid for as much as possible by increasing taxes on corporations and wealthy Americans. They are unlikely to raise income or corporate tax rates due to opposition from Sinema, but Democrats are proposing workarounds to establish a corporate minimum tax and levy billionaires’ assets.

Manchin has proposed a bill of $1.5 trillion but indicated some flexibility, and Democratic leaders in both chambers have welcomed Biden’s direct engagement in that negotiation.

“I’ve been hoping there was gonna be a deal for the last three months,” House Majority Leader Steny Hoyer said Friday, adding that Biden is “working it pretty hard, so I’m hopeful that we’ll get something done. Obviously our objective was to get something done by [Friday].”

Hoyer announced on the floor later Friday that he plans to bring both of Biden’s bills — infrastructure and the social spending plan — to the floor next week “if they’re ready.”

The incremental movement comes as Democrats are feeling growing pressure to deliver, particularly ahead of the Virginia gubernatorial election early next month.

While the White House gets closer to a deal with Manchin and Sinema, at least one House centrists who has vocally criticized the social spending package are also sounding more upbeat.

“The fact that we’re now down to a number that’s in the trillion-plus range, that something has gotten my attention,” said Oregon Rep. Kurt Schrader, one of four House Democrats who voted against central planks of Biden’s social spending plan in committee earlier this year.

But Florida Rep. Stephanie Murphy, another of those four Democrats who’ve slowed down key portions of the package, said she has expected more outreach from party leaders.

“While there’s significant focus on Senate members, House members also have distinct perspectives on the bill,” Murphy said, referring to a handful of moderate House Democrats who have expressed concerns on the bill’s policy as well as process. “I think it would be really wise to engage and see why.”

“We need to make sure that everybody’s concerns are heard and addressed,” Murphy said.

Biden, for his part, has expressed confidence and predicted at a CNN town hall Thursday night that the party could break its lengthy logjam: “I do think we’ll get a deal.”

During the town hall, Biden also discussed some of the party’s disagreements with Sinema and Manchin, including Sinema’s opposition to raising the corporate tax rate. The president said Sinema “will not raise a single penny in taxes on the corporate side and/or on wealthy people, period,” though some of the proposals she’s working on would target corporations and the rich without rate hikes.

Shortly after a Thursday meeting with White House staff, a source close to Sinema said the Arizona Democrat had agreed to proposals in Biden’s four revenue categories: international, domestic corporate, high-net-worth individuals and tax enforcement. It’s not clear, however, whether other Democrats have all signed off on those Sinema-approved provisions.

Biden also offered additional policy specifics Thursday night, opening a window into where the negotiations stand on the party’s top priorities in the social spending plan. For example, Biden said that the party’s proposal for paid family leave would last four weeks, instead of the 12 weeks that proponents of the package originally sought. In addition, Biden revealed that both Sinema and Manchin oppose expanding Medicare to include dental, vision and hearing.

Manchin “doesn’t want to further burden Medicare so that — because it will run out of its ability to maintain itself in the next number of years,” Biden said. “There’s ways to fix that, but he’s not interested in that part, either.”

Nicholas Wu and Marianne LeVine contributed to this report.