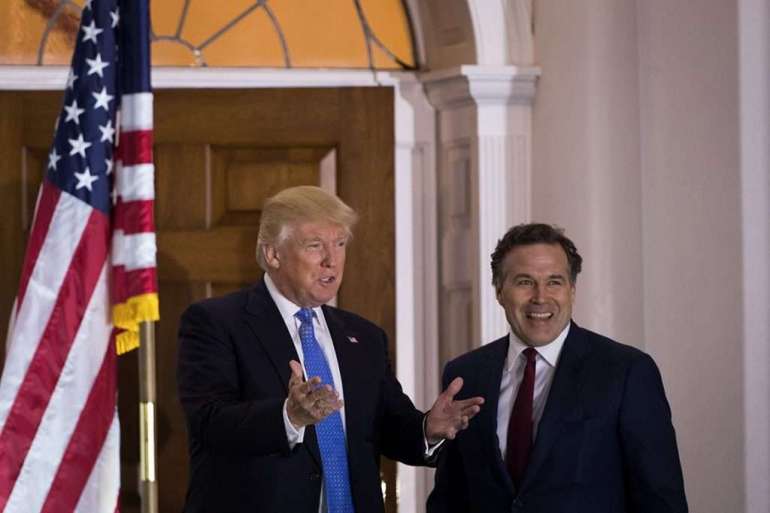 A native of the Pittsburgh area, McCormick currently runs Bridgewater Associates, the world’s biggest hedge fund with over $140 billion in assets. He boasts a glittering resume — after graduating from West Point and Army Ranger School, McCormick served in the Gulf War, where he won the Bronze Star, went on to earn his Ph.D. from Princeton, worked at McKinsey and served as a top Treasury official in the George W. Bush administration.

McCormick has not made a decision on whether to run, according to a number of sources. He didn’t respond to a request for comment.

In the aftermath of Republican Glenn Youngkin’s successful run for governor in Virginia — where he was able to win the votes of independents, suburban voters, and women in a blue state — Republicans are anxious to find candidates who might have a similar appeal.

“I’ve known Dave McCormick since the early 90s, and I think he would be an incredibly formidable candidate if he decides to enter the race. He’s a great Pennsylvanian who has all the necessary skills and attributes to be an outstanding United States senator,” said Dave Urban, a fellow West Point grad and close friend of McCormick, and a lobbyist with ties to Trump.

A prominent Republican close to the effort to recruit McCormick said that Youngkin’s victory on Tuesday underscored the value of candidate recruitment going into a year where Republicans are increasingly optimistic about their chances of winning back the House and Senate.

“There are many at both the grassroots and national level who see in Dave many of the attributes that made Glenn Youngkin a compelling candidate,” said the person, who added that McCormick has “an extraordinary network in both Pennsylvania and nationally.”

If he decides to run, McCormick would first have to navigate the optics of his current residence — at the moment, he lives in Connecticut with his family. Still, he has close ties to Pennsylvania, and frequently visits his family farm in Bloomsburg, where he was a wrestler and football player at the local public high school. After Princeton, he returned to Pittsburgh for ten years and was the CEO of a tech company called Free Markets.

“I think he would be the standout candidate and would immediately move to the front of the pack should he decide to go in,” said Jim Schultz, a prominent Pennsylvania Republican lawyer who served as general counsel to former GOP Gov. Tom Corbett.

“This will be one of the top Senate races in the country next year, and he can marshal the necessary resources to win a race like this,” said Schultz.

McCormick would also have to navigate a primary in which Trump, who won the state in 2016, looms large. Parnell, an author and Army combat veteran who also hails from western Pennsylvania, has emerged as the GOP frontrunner in the race to succeed retiring GOP Sen. Pat Toomey. But days after Trump’s endorsement, GOP opponent Jeff Bartos released police reports showing Parnell’s wife had taken out orders of protection against him in 2017 and 2018.

Another candidate with Trump ties — Carla Sands, a former ambassador to Denmark under Trump — has loaned $3.1 million to her campaign.

This week, Parnell’s estranged wife Laurie Snell testified in a child custody hearing that Parnell had assaulted her and their children, an allegation that raised questions about his viability as a candidate.

Parnell, who has denied the allegations of abuse, is scheduled to offer testimony in court next week.

“President Trump respects Dave and has spoken highly of his service and success,” said a person close to Trump. “There are a number of former Trump campaign and White House officials who would be hugely excited by his potential candidacy and would definitely encourage him to consider this more seriously.”

Christine Toretti, a Republican National Committeeperson from Pennsylvania, said she admired McCormick’s willingness to consider running and serving and said his name came up several times at a local Pittsburgh Republican event on Wednesday night.

“I think he would be the best shot we have for the Republican Party,” she said. “I find his candidacy very intriguing.”

McCormick is married to Dina Powell McCormick, a Goldman Sachs executive who previously served as a deputy national security adviser to Trump. His family also has a history of public service in the state: His father, James McCormick, served as the president of Bloomsburg University and chancellor for the Pennsylvania State System of Higher Education.

If he decides to run, McCormick has told people he would invest millions of his own money into the race, according to two Pennsylvania GOP sources.

“David McCormick will quickly emerge as the frontrunner,” said Greg Manz, a former spokesperson for the state Republican Party who worked on both of Trump’s presidential campaigns. “His public policy bona fides are second to none and he will showcase a preeminent fundraising prowess.”