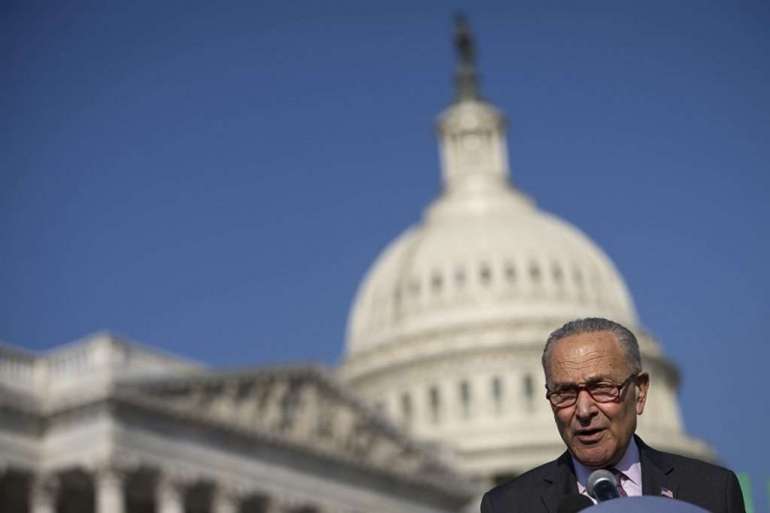 “It’s certainly a little mystifying why the House doesn’t see the same urgency we do on building a coherent China policy,” Sen. Chris Murphy (D-Conn.) said. “I think we’ve been waiting all year for the House to put together a process that at least creates a version of USICA that could get us to [a conference committee]. My feeling is some of us are kind of done waiting.”

But Meeks wants his chamber to adopt its own version of the China competition bill first and warned Schumer against forcing the issue.

“The House has to have a voice,” Meeks said in a brief interview Wednesday. “And the best way to have a voice is to pass something here. … And hopefully [Schumer will] see that also and push back, and understand we’re not going to allow something to be just jammed down our throats.”

The rift is yet another source of tension between the House and Senate, as Democrats feel increasing pressure to pass a host of priorities before the end of the year — including Biden’s social-spending bill — with little time left and no margin for error.

It’s also the latest wrinkle in Congress’ already-delayed effort to pass the annual defense policy bill, which has cleared both chambers each year for the past six decades. Disagreements over the China competition bill were the subject of yet another roadblock for the legislation on Wednesday.

Schumer’s push to include the USICA in a planned manager’s package of bipartisan and largely uncontroversial amendments forced senators to shelve a procedural vote to advance the defense bill, which was initially set for Wednesday morning.

“Trying to get together what’s in that package up front is the key,” Senate Foreign Relations Committee Chair Bob Menendez (D-N.J.) said of the delay.

The USICA would authorize funding for scientific research and development as a way to counter China’s technological advancements, and it also outlines new spending to boost the U.S. semiconductor industry, which has lagged amid the recent supply-chain backlog. The bill, costing a total of $250 billion, is the culmination of Schumer’s longtime interest in confronting an increasingly aggressive Beijing.

But Sen. Jim Inhofe, the top Republican on the Senate Armed Services Committee, said Wednesday that GOP senators were prepared to vote against the procedural motion on the defense bill if Schumer tried to add the China legislation without holding a separate vote on it.

“We’re not ready for a motion to proceed until we know what we’re proceeding to,” Inhofe told reporters. “It’s just an unnecessary obstacle. … That’s what’s holding it up now. It’s Schumer doing something unprecedented in as long as I can remember.”

Sixty votes are needed to advance the defense bill, so Republicans could stall floor debate if they oppose the procedural motion.

Even those who oppose the China competition bill, such as Inhofe, are likely to back the defense bill in the end, especially since the China package already passed the Senate and would clear the 60-vote threshold again if Schumer adds it as an amendment.

“It’s hard to vote against the NDAA because it has a lot of things in it, including hopefully” the intelligence community reauthorization measure, said Sen. Marco Rubio (R-Fla.), the vice chair of the Senate Intelligence Committee.

On the floor Wednesday morning, Schumer said the delay would allow time for senators to continue to work out the details, but said the chamber must “move forward on this bill, and quickly.”

“We’re continuing to work with our Republican colleagues to strengthen the substitute with as many amendments from senators as possible,” Schumer said. “We’re making really good progress, and so we’ll give the Armed Services Committee more time this morning to review the text and come to a final agreement.”

While the objections to the China bill in the Senate are mostly procedural, top House Democrats — who have not passed their own version of the bill — have expressed reservations about being forced to swallow the Senate legislation in its entirety as part of the annual defense legislation.

In a letter to colleagues this week, Schumer wrote that there was broad bipartisan support in the Senate for including the legislation in the defense policy bill, which he said would enable negotiations with the House “to be completed alongside [the defense policy bill] before the end of the year.”

Senators who backed the China package this summer are largely supportive of Schumer’s push to attach it to the defense bill, despite House Democrats’ reluctance — especially given the dwindling number of legislative days left on the calendar.

“Putting anything on the NDAA, if it’s possible, increases the likelihood of [the added item] passing by many orders of magnitude,” Sen. Brian Schatz (D-Hawaii) said.

“I would have thought there would have been something with the bill from July to now, and I think this is a good way of getting it on the table,” Kaine said. “It’d be a big win for the country if we get it done. And let’s get it done in this vehicle if we can.”

Speaker Nancy Pelosi has been relatively mum on her posture toward the China competition bill, but Schumer’s allies said it was unlikely that the majority leader would be pushing to attach it to the NDAA if Pelosi told him it would sink the defense bill.

Sen. Todd Young (R-Ind.), Schumer’s GOP counterpart on the China bill, said Pelosi was too “focused on a partisan tax-and-spend bill,” referring to the social-spending measure that Biden is pushing Democrats to pass before the end of the year. Young said Schumer’s move was “the best way to move forward in light of the priorities Speaker Pelosi has established.”

House Armed Services Chair Adam Smith (D-Wash.) is on board with including the China bill in the broader defense measure, but he warned that “a lot of logistics and a lot of details” need to be worked out among his fellow committee chairs if the gambit is to succeed.

For Smith, who publicly feuded with Schumer over the Senate’s inaction on the defense bill, the dust-up is evidence that the upper chamber should’ve acted weeks, if not months, ago.

“I’ve told folks that if you want to play a drinking game with me, for the next month … drink every time I say, ‘That’s why we should’ve done this sooner,’” Smith said.

“And you can start right now,” he said. “We should’ve done this sooner.”