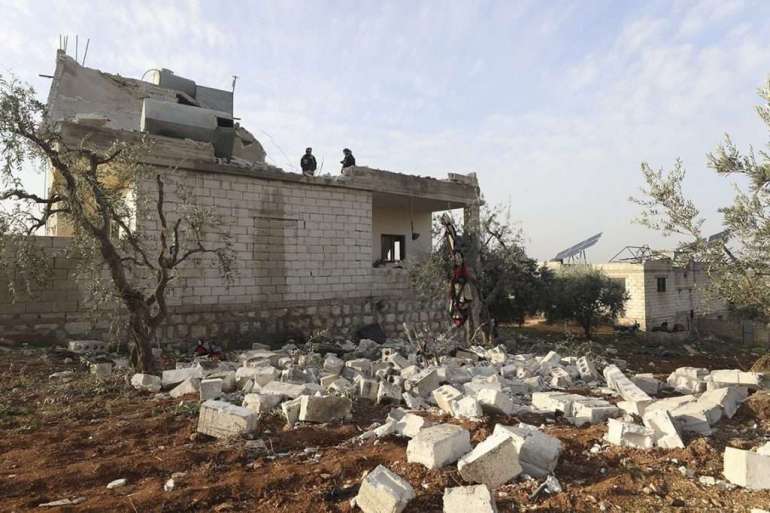 Senior administration officials said al-Qurayshi died in the same manner as former Islamic State leader Abu Bakr al-Baghdadi, who detonated a suicide vest — killing himself and three children — after he was cornered in a tunnel during a U.S. raid in northwestern Syria in 2019.

“Our team is still compiling the report,” Biden said of the al-Qurayshi raid. “But we do know that as our troops approached to capture the terrorist, in a final act of desperate cowardice, with no regard to the lives of his own family or others in the building, he chose to blow himself up … rather than face justice for the crimes he has committed — taking several members of his family with him, just as his predecessor did.”

In his remarks, Biden praised the U.S. troops “who skilfully executed this incredibly challenging mission,” as well as the “essential partnership” of the Syrian Democratic Forces — the mostly Kurdish-led militia backed by the United States and aligned against the Islamic State.

“This operation is testament to America’s reach and capability to take out terrorist threats, no matter where they try to hide, anywhere in the world,” Biden said.

The confirmation of al-Qurayshi’s death comes at a moment of heightened scrutiny surrounding civilian casualties resulting from U.S. military actions. The Pentagon faced significant criticism for an airstrike in Kabul, Afghanistan, last August that mistakenly killed an innocent aid worker and nine members of his family, not a member of the ISIS-K terrorist group.

An independent Pentagon review completed last November declined to recommend any disciplinary action for the airstrike, and Defense Department officials last December said there would be no punishments for any U.S. troops who played a role in the attack.

Last week, Defense Secretary Lloyd Austin ordered his staff to develop an “action plan” within 90 days for improving how the Pentagon limits and responds to civilian casualties caused by U.S. airstrikes. In a statement on Thursday, Austin said the al-Qurayshi raid “was specifically designed and conducted in a manner to minimize civilian casualties.”

“We know that al-Qurayshi and others at his compound directly caused the deaths of women and children last night,” Austin said. “But, given the complexity of this mission, we will take a look at the possibility our actions may also have resulted in harm to innocent people.”

In a call with reporters organized by the National Security Council on Thursday, two senior administration officials said the al-Qurayshi raid had “been months in planning,” describing it as an “incredibly complex” operation that “was not without significant risk.”

Al-Qurayshi “seemed to purposefully live in a residential building” and “never left the house,” using “innocent people as his shield,” the first senior administration official said. As U.S. troops closed in, al-Qurayshi detonated a “significant blast” on the third floor of the building, “killing himself and several others” — including his wife and children. The blast “was so large … that it blew bodies outside of the house and into the surrounding areas,” the first official said.

The first official did not provide a confirmed total number of casualties but said, “Some of the numbers that are reported out there do not align with our information.” The first official also said the barricaded lieutenant and his wife “may have had their children with them in that room,” and that those children may have died during the raid.

At the beginning of the raid, a family on the first floor of the building — consisting of “one woman, one man and a number of children” — were “safely removed from the site,” the first official said. The second official emphasized the care that U.S. troops took to avoid civilian casualties, including conducting call-outs which resulted in some of the residents leaving the building. “We knew that this was a complex target,” the second official said.

Biden first received an in-depth briefing on options to take down al-Qurayshi more than a month ago, and he was briefed again in the Oval Office this week, the first official said. On Tuesday morning, Biden “gave the final go” in an Oval Office meeting with Austin and Gen. Mark Milley, chair of the Joint Chiefs of Staff.

After the completion of the raid, Biden said, “God bless our troops” as he left the Situation Room, according to the first official, and national security adviser Jake Sullivan kept him updated overnight on developments related to the operation. In total, the raid lasted roughly two hours, the first official said, and “everything here ran really according to clockwork.”

Al-Qurayshi coordinated the Islamic State’s “global terror operations,” including those which “posed a direct threat to the American people” and the United State’s international partners, the first official said. Al-Qurayshi “oversaw the network that included ISIS branches around the world, from Africa to Afghanistan,” and he was “directly overseeing activities of ISIS across Iraq and Syria, which were seeking to reconstitute under his leadership.”

The second official predicted that al-Qurayshi’s death is “going to be a blow” to the Islamic State and said U.S. officials “anticipate that this is going to lead to disruption within ISIS.” Al-Qurayshi was “heavily involved in running many of the operations” of the terror group and one of its “few remaining legacy leaders,” the second official said.