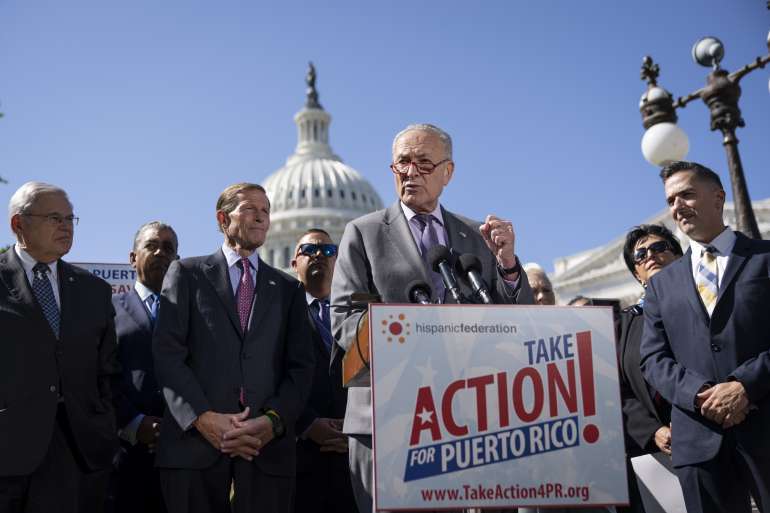 Puerto Rico Gov. Pedro Pierluisi on Tuesday asked the Biden administration for a major disaster declaration, which would enhance the kind of federal assistance residents can receive. Members of the U.S. House and Senate also expect to consider a supplemental aid package for the island, although the timing is uncertain.

A feud over whether and how to shift Puerto Rico toward wind, solar and other renewable power is one factor in the years of wrangling over the direction of the territory’s energy policies.

Under the 2019 Puerto Rico Energy Public Policy Act (17-2019), PREPA — the utility — is required to obtain 40 percent of its electricity from renewable resources by 2025, 60 percent by 2040 and 100 percent by 2050. Those resources now make up 3 percent of the island’s generated power, according to the Energy Information Administration.

Schumer said the Puerto Rico Energy Bureau, which oversees the island’s electricity supply, approved a plan to reach that 2025 target. But “PREPA has fought back, pushing on greater use of natural gas,” he said.

The senator accused PREPA and LUMA of undermining attempts by the U.S. Department of Energy, Federal Emergency Management Agency and Department of Housing and Urban Development to support the effort to build a resilient grid.

“These two agencies, PREPA and LUMA, cannot stand in the way once again, because you’ve seen by their inaction, the disaster and the harm that has gone to the people of Puerto Rico,” he said.

In response to a question about Schumer’s comments, FEMA Assistant Administrator for Recovery Keith Turi said agency officials “see nothing but good partnerships, good relationships and transparency here … and expect that to continue as we move forward.”

House Natural Resources Chair Raúl Grijalva (D-Ariz.) also criticized a privatization effort that led to LUMA taking over the grid in June 2021 — and, he said, the subsequent grid failures.

“This privatization effort has failed,” he said, adding that “you need a public utility that is independent, ethical and has real strong oversight. And that’s not there yet.”

The fallout against LUMA from the island-wide power outage extended to New York state, where Attorney General Tish James on Tuesday urged the federal government to probe the private company.

“Despite billions in federal assistance to strengthen Puerto Rico’s electrical grid, LUMA continues to be plagued by frequent and lengthy outages as well as some of the highest electric rates in the country,” she said in her letter, which urged DOE, FEMA and FERC to investigate the company.

Spokespersons for PREPA and LUMA did not immediately respond to requests for comment.

Power was been restored to 300,000 of the 1.5 million customers as of Tuesday afternoon, according to a LUMA update via Twitter. Those customers lost power Sunday even before Fiona hammered the island with Category 1 winds and rainfall that reached 30 to 32 inches in the southern parts of the island.

Turi said there “is really no standard” for how long to expect power to be out because storms vary significantly, but that FEMA is playing a “supporting role” in LUMA’s efforts to restore the full grid. The federal agency is ready to provide technical assistance and emergency funding if needed, he said.

He called it “too early” to say what Fiona’s economic impact on the island would be.

“We do know the impacts were significant,” particularly in southern parts of the island, Turi said.

Sen. Bob Menendez (D-N.J.) and Rep. Nydia Velázquez (D-N.Y.) led a bipartisan group of 43 legislators supporting Pierluisi’s request for President Joe Biden to declare the storm a major disaster. Such a declaration would allow FEMA to provide assistance directly to individuals to pay for housing needs and other costs, both to recover from the storm and for the permanent rebuilding of infrastructure.

Schumer said he spoke on Monday night to FEMA Administrator Deanne Criswell, who is on the ground in Puerto Rico assessing damage and coordinating emergency response. He said he asked her to prepare for the federal government to cover all costs for emergency protective services conducted in Puerto Rico rather than asking the territory to bear any of the costs.

Puerto Rico’s “government doesn’t have the money to lay it out, and the people are suffering and they are our fellow citizens,” Schumer said.

“We’re in disaster response right now,” he said. “When disaster recovery comes, the Congress will no doubt pass an emergency spending measure for the disaster in Puerto Rico, but also very likely the other disasters across the continental United States.”

CORRECTION: A previous version of this article misnamed the group hosting the event.