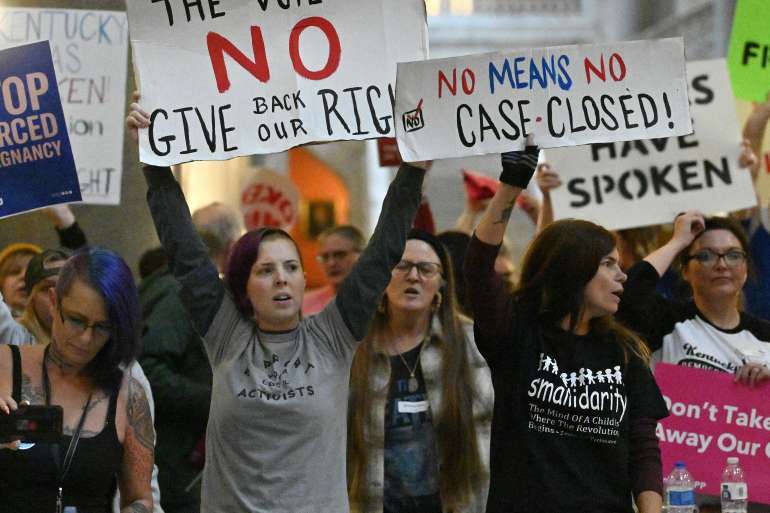 Should the court side with the challengers in the coming weeks, clinics could start providing abortions up to 15 weeks of pregnancy while arguments on the merits of the laws continue and while a separate lawsuit against the state’s 15-week ban plays out.

GOP Solicitor General Matthew Kuhn tried to make the case Tuesday morning that the ballot referendum should have no bearing on the court’s decision, saying that the state constitution was “silent” on abortion before the vote and continues to be so today. He asked the justices to leave the matter to the state legislature, which he called “the branch of government most responsive to the people.”

Several justices disagreed, arguing the 1891 constitution may be “silent” on abortion because women had no voice in law or in politics when it was drafted, and that last week’s referendum vote is more representative.

“It strikes me that a ballot initiative is the purest form of democracy,” said Deputy Chief Justice Lisabeth Hughes. “It is the people, themselves, speaking.”

Attorney Heather Gatnarek with the American Civil Liberties Union in Kentucky, who argued Tuesday on behalf of clinics in the state challenging the law, also took issue with the argument that only state lawmakers should decide restrictions on abortion going forward.

“It is the role of the legislature to legislate, but they must do so within the confines of what this court tells them is constitutionally permissible,” she said.

Gatnarek argued that the state laws should be blocked because they’re causing “irreparable harm” to patients who are undergoing the “pain and trauma” of being forced to bear children they didn’t want or are having to search for ways to travel out of state for the procedure.

Both she and some justices also zeroed in on the lack of exemptions in the bans for cases of rape or incest and grilled the solicitor general on whether doctors and patients can take advantage of the laws’ exemption for medical emergencies.

Kuhn pointed to multiple advisories from the state Attorney General’s office assuring that doctors are free to use their “reasonable medical judgment” on when it’s necessary to provide an abortion. He again urged the court to leave the issue to the legislature, which he said is “continually monitoring the situation on the ground” and has reached out to the Attorney General’s office about introducing a bill next year to add rape and incest exemptions to the law.

Gatnarek responded that the advisory memos are not binding and that local prosecutors could still criminally charge doctors for emergency abortions, a fear she said is having a chilling effect and putting pregnant people in danger.

“Doctors should not be placed in a situation where they are left to wait for their patients to deteriorate before they may meet one of the narrow exemptions in the two bans currently in place,” she said.

Justice Michelle Keller, citing her past work as a nurse, scolded Kuhn for “obfuscating.”

“I think you’ve misrepresented the exemption for the life of the mother,” she said. “I don’t know what you told the medical community. But I do know that physicians all over the commonwealth are calling their risk managers and hospital lawyers not knowing what to do. And sometimes the risk managers and lawyers aren’t available at 3 in the morning to give a cogent answer. And in those situations, seconds and minutes matter.”

If the ACLU convinces the court that the state constitution’s language around privacy extends to abortion rights — an argument a lower court has endorsed — it could win blocks on both the ban at conception and the six-week ban in the next few weeks. But the state’s 15-week ban, which is being challenged separately, would remain in place. State courts would then hear arguments on the merits of the laws, with testimony from doctors and other experts about the impact on the ground.

CORRECTION: A previous version of this report misstated the date of the Kentucky vote on a state constitutional amendment removing the right to an abortion.