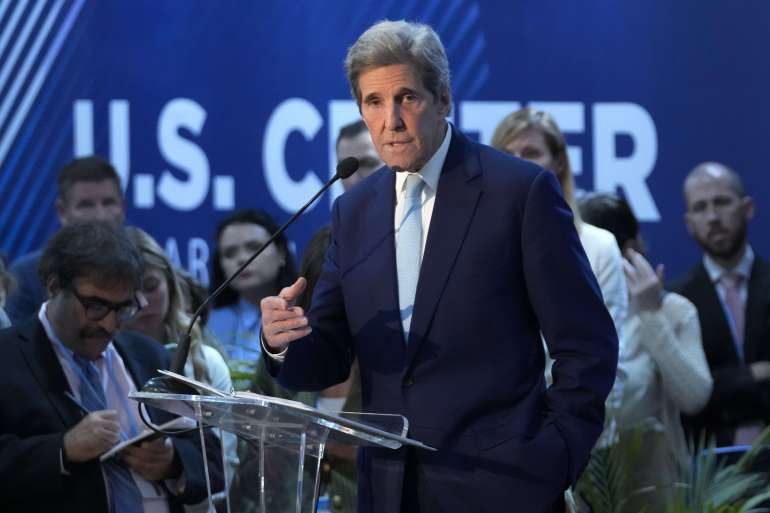 The proposal may still fail to satisfy critics from developing countries who say the U.S. is continuing to shirk its responsibility for all the greenhouse gases it has pumped into the atmosphere since the 19th century. Another potential sticking point is the U.S. insistence that China — now the world’s top carbon polluter — must be among the countries opening their wallets.

Still, the idea that the U.S. would even consider supporting the creation of a climate damage fund is a potentially seismic shift in its thinking after 30 years of opposing the concept. It could also attract fierce criticism back home, where Republicans hostile to President Joe Biden’s climate agenda are due to take control of the House in January.

A State Department spokesperson said late Friday that delegates at the summit were continuing to negotiate but did not confirm that the draft text was a U.S. proposal.

However, a U.K. official told POLITICO that officials from the U.S., Canada, New Zealand and Australia wrote the text together after being convened by Alok Sharma, a British member of Parliament who ran last year’s U.N. climate talks in Glasgow, Scotland.

The draft being circulated, which has not yet been formally proposed to the summit’s Egyptian presidency, would expand the sources and methods of financing disaster-struck communities. It calls for a two-year process that would end in the establishment of “a fund that is effective and attracts contributions from a wide variety of Parties and sources, including both public and private.”

The document also says a task force should be established to design the fund and charged with “expanding sources of funding,” in a nod to the U.S. concerns about China paying.

The U.S., which is the world’s biggest contributor to climate change historically, has raised worries that a fund would open it to legal action for harm caused by its fossil fuel emissions dating back to the start of the Industrial Revolution. The text includes an explicit clause that exempts donor countries from “liability and compensation.”

Many of the proposal’s provisions address U.S. concerns about relying solely on public money to fill the fund. U.S. special climate envoy John Kerry — who was conducting talks via phone from isolation after coming down with Covid-19 — has said getting that funding through Congress would be politically difficult.

The draft calls for “Enhancing the responsiveness” of bilateral, multilateral and international financial institutions, which alludes to development banks such as the World Bank, where the U.S. is the largest shareholder. It also calls on the World Bank and International Monetary Fund to “contribute to funding arrangements … responding to loss and damage.”

Kerry has argued that multilateral development banks need to put more money behind renewable energy and efforts to adapt to droughts, rising seas and other effects of climate change in the developing world. He called on them this week to have a plan to overhaul their climate strategy by April.

The document also calls for the use of “debt deferment” by multilateral lenders in the wake of climate disasters that strike heavily indebted nations, an idea championed earlier in the two-week conference by Barbados Prime Minister Mia Mottley and seconded by French President Emmanuel Macron.

The draft falls short of a demand made Tuesday by a bloc of 134 developing countries, including China, that called for establishing a fund at the talks in Egypt rather than at a later date. That fund would be designed by a working group in which the balance of power was held by the poorer countries who would be the recipients. The EU has slammed that proposal for shielding China from paying into it.

The EU then made a counterproposal to immediately create a new fund but with only “the most vulnerable countries” as recipients. It also conditioned the fund on global greenhouse gas emissions peaking before 2025 and would expand its donor base beyond the wealthiest industrialized nations — both issues that challenge long-standing red lines for China.

One climate activist at the talks, Harjeet Singh of the Climate Action Network International, derided the text leaked Friday as “a further watered-down version of what the European Union presented earlier.”

“Instead of establishing a new fund at COP27, as demanded by developing countries, it only offers a vague process to defer the decision,” said Singh, the group’s head of global political strategy. “Such a proposal undermines the urgency of action required to respond to the needs of people facing climate emergency.”