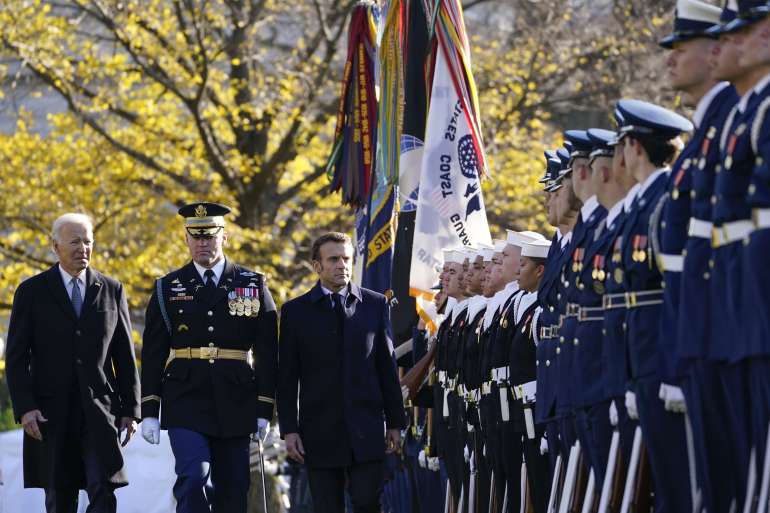 The war in Ukraine — now in its tenth month and with no signs of abating — has pummeled the global economy and fueled an energy crisis in Europe. And after nearly a year of trans-Atlantic unity, European leaders are starting to express frustration at their economic relationship with the United States. Macron is expected to press Biden on several areas of disagreement over trade ties and the war’s future.

It is a tested alliance but one that has still proven strong. Russia’s invasion of Ukraine has reinvigorated bonds between the United States and Europe — as well as bolstered NATO — especially after a difficult period of isolationist and transactional foreign policy under former President Donald Trump. On a more personal level, Biden and Macron, despite a 36-year age gap, have grown close, illustrated by the U.S. president selecting France for his first state visit.

As winter approaches, however, a chill may begin to set in.

Due to its proximity to the war zone, Europe has borne the brunt of the economic impact and the continent is teetering on the edge of what could be a significant recession. A number of European leaders, including Macron, have begun pushing against a war expansion that could prolong the death toll and economic cost.

The explosion of a stray air-defense missile in Poland two weeks ago offered an unsettling reminder of how close the war is to NATO territory. Hours after the blast, Biden and Macron joined other leaders on the sidelines of the G-20 in Bali, Indonesia to reaffirm their commitment to the alliance.

Macron has signaled he desires the war to end diplomatically and not in the battlefield. In the run-up to Russia’s invasion, Macron took it upon himself to try to negotiate with Vladimir Putin to prevent the conflict and has suggested he could play a role to try to bring the Russian leader to the bargaining table. But there are no signs the Kremlin is willing.

“The G-7 is more unified at this point than since G-20 was created in 2008. But we’re not in any way moving toward a negotiated settlement,” said Ian Bremmer, president of Eurasia Group, a global risk assessment firm. “Strengthening the alliance doesn’t mean we’re any closer to ending the war, and the war is causing enormous damage.”

Biden has repeatedly declared that peace talks would only begin when Kyiv signals it is ready for them, and Washington has helped bolster Europe’s lagging defense capabilities. This week, the U.S. approved $53 million to help Ukraine acquire electricity grid equipment to help against Russian attacks that have plunged the nation into darkness.

The biggest diplomatic row between Washington and Paris came over last year’s agreement for Australia to purchase nuclear powered submarines from the U.S. and United Kingdom. The snub cost France 56 billion euros and forced Biden to try and smooth over relations.

At least a portion of Biden and Macron’s meeting also will focus on minimizing the friction around trade issues. The tax incentives for clean energy included in the Inflation Reduction Act are of increasing concern for European leaders, who worry about sectors of their own economies shifting operations to the U.S.

“That could really hamper collaboration and burden sharing on the war effort,” said Constanze Stelzenmüller, a Europe expert at Washington’s Brookings Institution. “And it’s all the more disturbing because this is an administration that has worked really well with Europe.”

Macron has been one of the most vocal critics of the IRA, accusing the U.S. of pursuing a protectionist policy. On Wednesday, he sat down for lunch with members of Congress, company executives and government officials in Washington and warned that such help for U.S. firms could “kill a lot of jobs.”

“This is super aggressive for our business people,” said Macron. “You will perhaps fix your issue, but you will increase my problem.”

Paris and Brussels, headquarters to the European Union, would like Washington to tweak the IRA so that European companies can also benefit from American aid, like manufacturers in Canada and Mexico. A particular flashpoint has become the IRA’s credits for the manufacturing of electric vehicles. This fall, U.S. and EU officials established a joint task force to discuss the new law while the White House insisted that the legislation would help American allies, too.

“It’s not a zero-sum game,” John Kirby, National Security Council coordinator for strategic communications, said in a recent press briefing. “I mean, clean energy — that’s a tide that raises all boats, the more we can transition to a clean energy economy around the world. And there’s plenty of opportunity for everybody in that.”

Officials on both sides of the Atlantic, though acknowledging policy differences, stress the two leaders have a warm relationship. Macron, for a while, tried to cozy up with Trump but that relationship grew strained. He and Biden have spent time together at a series of summits, with the French president spotted throwing his arm around his American counterpart’s back as they walked together at the G-7 in Germany in June.

Energy, however, has become the biggest crisis across Europe, which has become substantially dependent on Russian fuel. After the war began, supply dwindled and prices soared, exacerbating inflation that was already rising as economies emerged from the Covid pandemic. The U.S. has stepped in to help replace Russia as one of the continent’s biggest natural-gas purveyors. But its shipments of liquefied natural gas came with much higher prices.

In the past, France’s Economy Minister Bruno Le Maire accused the U.S. of inflating the place of gas sold to Europe, warning against “American economic domination.” And an Elysée official said Macron will ask the Biden administration to find ways to reduce the gap between the price of gas sold in the U.S. and the final price of natural liquified gas exported to Europe.

“There is some posturing. Macron wants to have his own voice and not just follow in the steps of the big guy [Joe Biden],” said Nicole Bacharan of the Paris-based National Foundation for Political Science. “It’s an eternal dynamic. The old power that became a medium one with relation to the U.S. France needs to have its own voice, to express and to exist.”

Clea Caulcutt and Giorgio Leali in Paris contributed to this report.