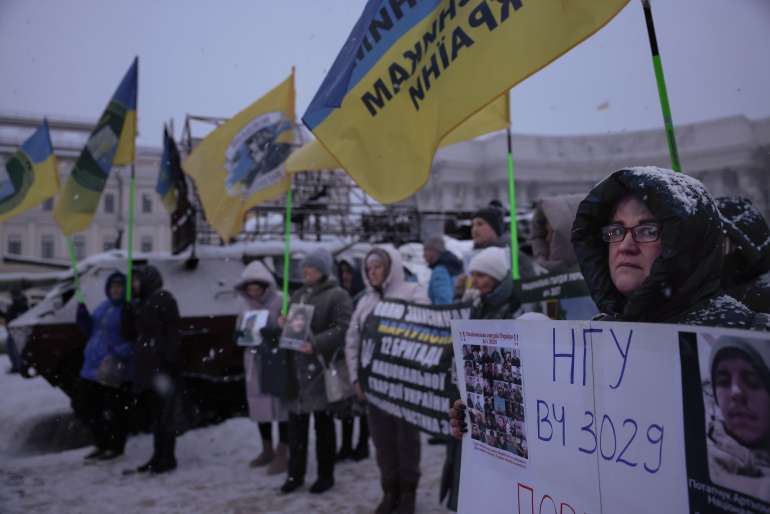 The money from the Afghanistan trust fund could provide a stopgap — at least in the short term. It could also serve to ease those tensions inside the alliance at a crucial moment in the war — at a time when NATO unity is key.

NATO officials have discussed the possibility of using the Afghanistan funds for Ukraine for more than a month, including during a meeting in Brussels in October, according to one of the Western officials. The fund has been frozen and the alliance has worked to come up with a mechanism for transferring the money back to individual nations or moving it somewhere else, but it is up to each donor nation to decide how to use the money. Some NATO countries are considering using some or all of those funds for Ukraine.

Kyiv has been asking Western allies to increase their financial support for months — in the form of weapons, humanitarian aid and funding for rebuilding the country’s energy infrastructure — as it tries to hold its position amid Russia’s continued bombardment of missiles.

But donations to Ukraine over the past 10 months have strained some smaller nations’ defense budgets. And while the European Union has promised to reimburse individual nations for their donations, that plan has caused grumbling among some big donors such as Poland that the funds aren’t sufficient to cover their growing expenditures.

Since Russia’s invasion of Ukraine, NATO countries have individually put up tens of billions of dollars to support Ukraine with both weapons and humanitarian aid. The United States has led the way with $19.7 billion in military assistance since the start of the war. The leftover funds from the Afghanistan account are likely not enough on their own to help Kyiv sustain its operations through the winter. But the money could help those European NATO countries with smaller budgets ramp up their donations to Ukraine at a time when their economies are struggling.

The U.S. is not a participant in the Afghan National Army Trust Fund. But senior Biden officials have urged their European allies to continue to help finance Ukraine’s operations despite the growing financial strains.

NATO spokesperson Daniele Riggio said the process of returning money from the account to donor countries has already begun, but didn’t directly address questions about the Afghan funds being used by the alliance to support Ukraine. The Afghan National Army Trust Fund is one of a number of such efforts aimed at helping Afghanistan that have been frozen, shut down or repurposed since the fall of Kabul.

Officials in President Volodymyr Zelenskyy’s office did not comment.

The proposed transfer of funds is the latest in a series of international agreements that countries have slapped together over the past nine months to try to quickly arm and aid Kyiv, including the European Union efforts. None of those agreements rely on previously allocated funds like the transfers from the Afghan account directly to Ukraine.

At least one country has already committed to using some of the Afghan trust fund donations for Ukraine, while it remains a matter of discussion for many other allies once the money is returned to national coffers.

The shifting needs of the battlefield and the unpredictability of Vladimir Putin makes long-term planning for Ukraine aid difficult.

“It’s almost impossible to calculate Ukraine’s actual needs both in terms of military or humanitarian aid because the nature of the war is so rapidly evolving,” said Samuel Charap, a Russia and Eastern European researcher at RAND. But in the long run, “every little bit helps” both the military and civil society.

The main vehicle for a place to park the money formerly earmarked for Afghanistan is NATO’s Ukraine Comprehensive Assistance Package, which was established in 2016 in the wake of Russia’s 2014 annexation of Crimea. The account provides money for everything from humanitarian and infrastructure projects to non-lethal military aid and has become the mechanism through which the alliance assists Ukraine.

The Dutch have contributed $134 million to the Afghan account, and are planning to move at least some of that to the Ukraine fund, said Casper Soetekouw, spokesperson for the country’s foreign ministry.

“The Netherlands, like many other allies, has used the money it received back from NATO’s Afghan trust fund until now to contribute to NATO’s Ukraine CAP fund,” he said, adding that the Dutch have already contributed $26 million to the Ukraine account for fuel, winter clothing, medical supplies and counter-drone systems.

The CAP fund is disbursing about $100 million worth of projects focused on fuel, medical kits and generators, NATO spokesperson Oana Lungescu said in an email, noting that the work is focused on “non-lethal” assistance.

At last month’s NATO foreign minister meeting in Romania, Germany and Norway “made further commitments” to Ukraine, Lungescu added, “and more are expected to follow suit.”

Norway — which has donated $30 million to the Ukraine fund so far — is set to take over management of the Afghan fund in January, mostly as a bureaucratic exercise to close it out and help oversee the return of the money to individual nations. A spokesperson for the defense ministry said that by law the $115 million Oslo earmarked for Afghanistan will have to be returned to its national budget before it can be reallocated, but that Norway has provided tens of millions in aid to Ukraine with an eye toward the Afghan fund eventually reimbursing the government.

Lithuania has also signaled its intent to roll the $2.8 million it has in the Afghan fund into Ukraine aid, both by purchasing equipment for Kyiv and adding to NATO’s Ukraine pot of money.

Others contacted by POLITICO stressed that regardless of the fate of the trust fund money, they are committed to contributing to Ukraine.

Finland’s Minister of Defense Antti Kaikkonen said the fate of the country’s roughly $19 million worth of donations to the Afghan fund was still being discussed in Helsinki.

“We haven’t had any political talks yet about the future of that money, but we’ve been helping Ukraine in many ways with military aid, financially, and we are ready to support Ukraine in the future,” he said on the sidelines of the Reagan National Defense Forum in California on Saturday.

He added that Finland is readying its eleventh package of military aid for Ukraine, and while Finland does not disclose the contents of these packages, Kaikkonen said, “we have taken into account that winter is coming.”

Multiple leaders have in recent days and weeks publicly pledged to continue supporting Ukraine, including by sending additional weapons.

“The main focus now is on supporting Ukraine, ensuring that President Putin doesn’t win, but that Ukraine prevails as a sovereign nation in Europe,” NATO Secretary General Jens Stoltenberg said during a visit to Romania last week.

Speaking to reporters at the Reagan forum, Army Secretary Christine Wormuth said both the U.S. and allies need to continue to push money and weapons into Ukraine both in the near and long-term. “We have to do everything we can to kind of put them in a position of strength,” she said.