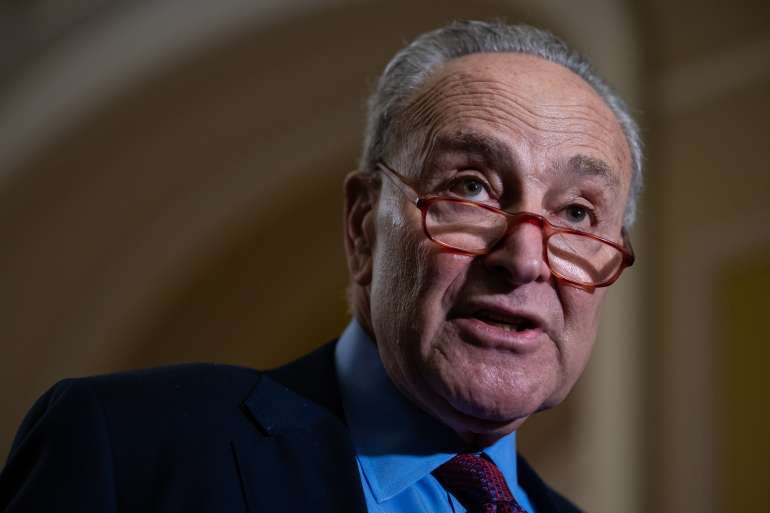 The House has been the epicenter of investigations in the current Congress given the deadlocked Senate, but that spotlight will be shared starting next year. Democrats’ loss of the House has created an investigative “vacuum” that party senators intend to fill, said Sen. Richard Blumenthal (D-Conn.), an investigative-minded former prosecutor and senior Judiciary Committee member.

“There are very definitely investigations that I think now will be possible,” Blumenthal said, referring to Democrats’ inability to issue subpoenas in the current 50-50 Senate because Republicans could block them at the evenly divided committee level.

Democrats’ Senate pickup is welcome news for a party that had agonized over how to push back on a spate of planned House GOP investigations into everything from the president’s son to the U.S. withdrawal from Afghanistan to the FBI and Justice Department. For the moment, President Joe Biden’s party is brushing off Republican efforts. Majority Leader Chuck Schumer indicated last week that oversight isn’t just about the executive branch, but also the private sector.

A senator set to lead that sort of private-sector oversight — Bernie Sanders (I-Vt.), incoming chair of the Health, Education, Labor and Pensions Committee — said it was “premature” to discuss subpoenas but outlined a laundry list of areas he plans to investigate next year.

“We’re talking about incredible greed in the pharmaceutical industry, very high prices. We’re paying the highest prices in the world for healthcare, we’re talking about union busting. … I think those are issues the American people want us to look at,” he said.

But that doesn’t mean Senate Democrats are going to immediately start firing off subpoenas. Its 51-49 majority has given the party more power, but that authority remains fragile — a fact underscored by Arizona Sen. Kyrsten Sinema’s decision to become an independent. Sinema is expected to keep her committee assignments, importantly, with Democrats and Schumer seeking to tamp down the ramifications for their majority by vowing that Democrats would still be able to “exercise our subpoena power.”

However, they’ll have to carefully navigate aggressive investigations for another reason: a difficult 2024 Senate map. Several of their seats in red and purple territory are up next term, where partisan probes may not pay political dividends.

Among those up for reelection, besides Sinema, are Sens. Joe Manchin (D-W.Va.), Jon Tester (D-Mont.) and Sherrod Brown (D-Ohio), who chair the energy, veterans’ affairs and banking committees, respectively. And all hail from states that voted for Trump in 2020, two by overwhelming margins.

Brown shrugged off a question about new investigative priorities once he gets boosted committee powers: “Nothing jumps to mind, but perhaps.”

Despite past intra-party criticism of the Biden administration, from a rule to decrease methane emissions to the botched pullout from Afghanistan, Democrats are less than keen on conducting oversight on the current head of the executive branch. Sen. Sheldon Whitehouse (D-R.I.), who is poised to chair the Budget Committee, said he “wouldn’t be surprised” if there were members within the conference who thought that anything negative about the administration “was kryptonite.”

But Democrats are already leaving a trail of bread crumbs pointing to what they could dig into next year, likely picking up long-awaited threads that the 50-50 Senate has prevented them from pursuing.

Sen. Ron Wyden (D-Ore.), the chair of the Finance Committee, and outgoing House Oversight Chair Carolyn Maloney (D-N.Y.) are asking for records related to Trump-son-in-law Jared Kushner’s family business. And in line with Schumer’s corporate focus, Wyden sent a letter last week to Amgen, a biotech company, as part of a probe into pharmaceutical companies’ compliance with tax laws.

Wyden pointed to the Kushner-related effort as a sign that Democrats “believe in strong oversight” and signaled that he’s also interested in Trump’s tax returns. But he sidestepped committing to using subpoenas next year.

“All the options are on the table,” Wyden said. “But as my wife always says, ‘you know there’s some history here.’ I wrote the first Trump-related tax bill.”

Whitehouse, one of the caucus’ most outspoken voices on climate change, pointed to Rep. Ro Khanna’s (D-Calif.) investigation into whether fossil-fuel companies had been misleading and spreading misinformation on the impact of climate change as an example of an area Senate Democrats could take over next year.

“I think it can be quite busy and quite productive,” Whitehouse said about the forthcoming Democratic investigations.

Judiciary Committee Democrats have also signaled an interest in investigating decisions made by the Trump-era DOJ. They’ve previously signaled that they wanted to talk to former Attorneys General Bill Barr and Jeff Sessions, a goal they had to temporarily abandon in the 50-50 Senate.

And Sen. Gary Peters (D-Mich.), the homeland security and governmental affairs panel chair, said Democrats are still mulling how to handle House Republicans’ Hunter Biden investigation — a topic Democratic senators have had to navigate before. In the run-up to the 2020 election, Sens. Ron Johnson (R-Wis.) and Chuck Grassley (R-Iowa) teamed up to investigate the Biden family, issuing subpoenas through a Senate oversight panel over Democratic objections.

That probe sparked warnings from their Republican colleagues about inadvertently spreading Russian misinformation heading into the presidential balloting.

“We are in the process right now of putting together some of the investigations we’re going to do for the next two years,” Peters said, adding that the House GOP’s Hunter Biden investigation was one issue that was top of mind “when we think about our calendar.”