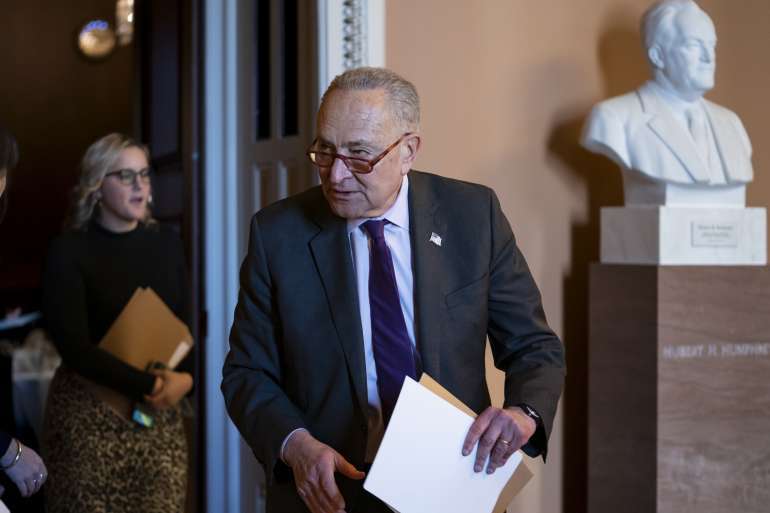 It repeals the Pentagon vaccine mandate within 30 days of enactment. The provision is a win for Republicans who argue that forcing thousands of people out of the ranks for not getting the shot has compounded an already tenuous recruiting and retention environment for the military.

Administration officials say Biden and Defense Secretary Lloyd Austin stand by the vaccine mandate as a matter of health and readiness for the armed forces. But in signing the bill, Biden will effectively agree to end the policy. The White House has given no indication the commander in chief is weighing a veto of the must-pass bill.

The measure also significantly revises Biden’s $802 billion budget request, which took heat from both parties. Lawmakers agreed to boost the topline to buy more weapons and address the impact of stubborn inflation on the Pentagon, troops and the supply chain.

The final bill authorizes $847 billion in national defense funding, $45 billion more than Biden sought. The Pentagon receives $817 billion of that, while $30 billion would go toward nuclear weapons development overseen by the Energy Department. The total comes to $858 billion when factoring in accounts that don’t normally fall under the Armed Services committees’ jurisdiction.

Both parties also touted that $19 billion of the increase to Biden’s budget goes toward mitigating inflation. The measure also poured $32.6 billion into shipbuilding to buy 11 new hulls, up from the eight ships the Navy sought to procure. It also authorizes 69 F-35 fighters, eight more than the Pentagon requested. The bill halts Biden’s plans to kill a developmental nuclear-tipped sea-launched cruise missile and scrap the U.S. inventory of B83 nuclear gravity bombs.

The agreement, which was unveiled last week by leaders of the House and Senate Armed Services panels, cleared after days of wrangling in the upper chamber over efforts by senators to change the bill at the eleventh hour.

In the end, the Senate knocked down a pair of amendments that would have sent the bill back to the House before it could go to Biden’s desk.

Senators resisted a conservative push to go even further in reversing the vaccine mandate. A proposal from Sens. Ron Johnson (R-Wis.) and Ted Cruz (R-Texas) that would have paved the way to reinstate troops who were drummed out of the military for refusing the Covid vaccine and granting them back pay failed in a 40-54 vote. Democrats have resisted the move, though they agreed to unwind the policy that would separate personnel who don’t get vaccinated.

A number of conservative senators had clamored for the stronger measure. The vote previews a fight that may happen next year when Republicans control the House and will again aim to force the issue.

Also rejected was an overhaul of permitting processes for energy projects pushed by West Virginia Democrat Joe Manchin. The vote was pushed by Senate Majority Leader Chuck Schumer (D-N.Y.), who along with House Speaker Nancy Pelosi (D-Calif.) cut a deal with the centrist Manchin on the legislation.

Final talks on the defense bill were held up in part over a push by Schumer and Pelosi to attach Manchin’s permitting reform measure to the defense policy bill. But the amendment went down Thursday in a 47-47 vote.

Both proposals required 60-vote majorities to be added to the bill, making them largely show votes.

The bill is named for Sen. Jim Inhofe of Oklahoma, the ranking Republican on the Senate Armed Services Committee. Inhofe, a defense hawk who previously chaired the panel, is set to resign from the Senate at the end of the session.

Lawmakers will also have to pass full-year funding legislation to make the major increase to the Pentagon budget a reality. The Senate is expected to clear a budget band-aid to keep the government operating for the next week while leaders of the House and Senate Appropriations committees negotiate a full-year funding package, which will likely reflect the budget levels in the defense policy bill.