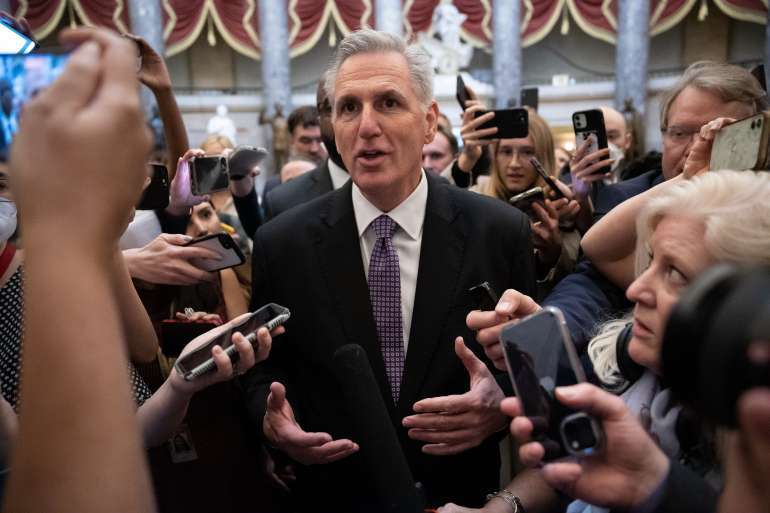 Minutes before the House resumed to see 20 McCarthy critics coalesce around Rep. Byron Donalds (R-Fla.) on the fourth go-round, McCarthy said members would hold at least one more vote as a handful of conservatives vowed to oppose adjourning. Four members of the House Freedom Caucus told POLITICO that they were against punting further speaker ballots, while a fifth signaled agreement.

“We’re not going to adjourn. We’ll have another vote today,” McCarthy told reporters.

“It may not happen on the day we want it, but it’s going to happen,” he added late Tuesday night, while trying to downplay his precarious standing. “I wouldn’t say it’s a battle. It’s not that far away … we’ll get there.”

In the meantime, conversations between McCarthy allies and his holdouts that had been happening in private began to break into public view. Shortly after the vote, Reps. Mike Gallagher (R-Wis.), Jason Smith (R-Mo.), Michael Guest (R-Miss.) and Brian Fitzpatrick (R-Pa.) — all McCarthy allies — were seen talking to his stalwart critic Rep. Matt Gaetz (R-Fla.).

Behind the scenes, several key McCarthy allies attempted to back-channel with his defectors, yet few shared resounding optimism that he could win enough votes on Wednesday.

“You are going to see the votes against him increase on this fourth ballot,” Rep. Bob Good (R-Va.) said before Donalds claimed 20 votes and Spartz shifted. “I think you’re gonna see a another high quality, very capable candidate emerge here on this next [ballot].”

That boost in confidence comes after an hours-long meeting on Tuesday night in House GOP Whip Tom Emmer’s (R-Minn.) office that joined three “no” votes — GOP Reps. Scott Perry (Pa.), Chip Roy (Texas) and Gaetz — with a network of McCarthy backers. Still, there was no immediate breakthrough.

In fact, in a sign of further animosity, after the gathering Roy pointed back to a fiery conference meeting that happened earlier Tuesday. McCarthy and his allies had come out swinging against his dissenters at that meeting, a move that some House Republicans say alienated his opponents further.

Roy bashed the meeting as a “complete disaster” and, contrary to McCarthy, argued the standoff was nowhere close to being close to resolved: “How do you put that genie back in the bottle? I don’t know.”

And even McCarthy allies pumped the brakes on the possibility that Republicans would be able to snag a quick deal on Wednesday.

“I don’t think anyone should be assuming something drastic happens quickly. We have to be patient,” said Fitzpatrick, a McCarthy ally who’s trying to negotiate with his conservative colleagues. “The fever’s got to break here. The very thing that’s got to happen is the temperature has got to come down.”

Fitzpatrick also questioned whether it was wise to hold any more votes before a deal is struck with House members slated to return to the chamber at noon, adding: “Personally I think we should have an agreement before we go to the floor, but that’s not my decision.”

GOP lawmakers across the party agree it’s entirely unclear what happens next. One thing that does seem clear to them, however, is it seems impossible for McCarthy to shore up the support he needs on Wednesday.

McCarthy, though, dropped hints Tuesday night about his next step: If he can’t flip enough of his opponents to vote for him, then he could try to get some of them to vote “present,” which would lower the total number of backers he needs to win the gavel.

“You just have to get more votes than 212, where the Democrats are. Ideally, it’d be nice to get 222,” McCarthy said, referencing the total number of Republicans currently in the House conference.

But some of his most dug-in defectors quickly shot down the possibility. Gaetz called the proposal “absurd.” And Roy, asked about whether the 19 “no” votes might switch to present, added: “I just don’t see it.”

“If he’s literally trying to patchwork votes together, to scrap together the votes by trying to carve out present votes and hope some people don’t show up or something — I just don’t see that as a path to a strong leadership position,” Roy added.

McCarthy’s decision to adjourn after three failed votes on Tuesday — despite his telling allies he planned to battle it out ballot after ballot — was viewed by some of his allies as an acknowledgment that he wasn’t close to a breakthrough and keeping people on the floor was becoming counterproductive.

Others cast it as a decision prompted by panic after McCarthy’s dissenters grew from 19 to 20 on the third ballot, with Donalds switching his support from the Californian to Rep. Jim Jordan (R-Ohio).

Donalds didn’t explicitly rule out switching back to McCarthy if he can show a path to securing the gavel, but criticized the strategy of holding continuous votes with little movement.

“We’re basically at an impasse. So what are we going to do, have the same vote numbers for 10 ballots? That’s ridiculous and that makes no sense,” Donalds said. “He’s got to prove he can get there. At the end of the day you have to close the deal. … We do not reward not being able to close deals.”

The extra time, however, also created the opportunity for members to cluster and chat about who could possibly take McCarthy’s place. Some say they can’t fully explore that question while McCarthy is still in the race, as his allies stress that dozens, perhaps as many as 80, “Only Kevin” members are refusing to hear other possibilities.

And there’s another factor at play outside the Capitol halls: Whether former President Donald Trump uses his power — which is not as strong as it once was — to pressure some of the “no” votes to flip. On his social media platform Wednesday morning, Trump reiterated his support, despite growing rumblings that he was bowing away from his endorsement of the GOP leader.

“DO NOT TURN A GREAT TRIUMPH INTO A GIANT & EMBARRASSING DEFEAT. IT’S TIME TO CELEBRATE, YOU DESERVE IT,” Trump wrote. “Kevin McCarthy will do a good job, and maybe even a GREAT JOB.”

The endorsement came after McCarthy and Trump spoke on Tuesday. The California Republican signaled that night that the former president wanted him to stay in the race and downplayed the chance that Trump would turn on him.

“Trump has already reiterated his support for me,” McCarthy said. “From his perspective, he wants to see Republicans united.”