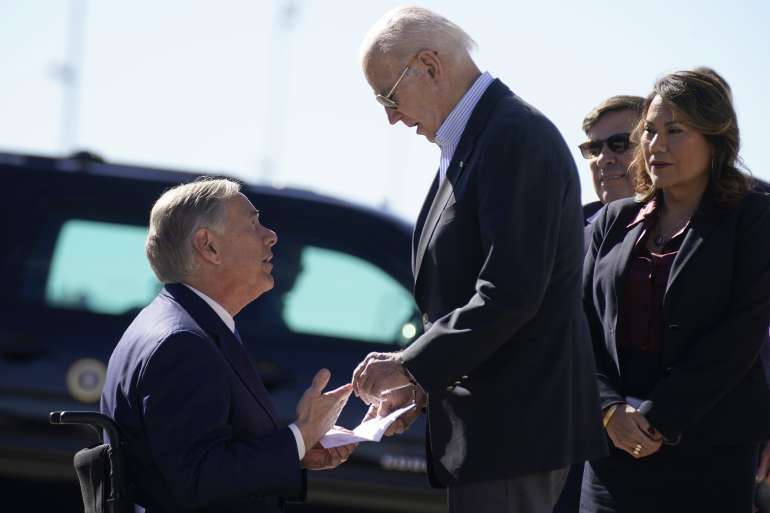 The governor, for his part, has also faced accusations of using migrants as pawns, for facilitating the drop-offs of thousands from the border to Northern cities.

The president also planned to meet with local business leaders, White House press secretary Karine Jean-Pierre said on Sunday. Asked specifically by reporters, Jean-Pierre did not say whether Biden would speak to migrants on the trip.

The White House unveiled a new policy last week to grant humanitarian “parole” to 30,000 migrants a month from Cuba, Haiti, Nicaragua and Venezuela, as well as crack down on those who don’t go through legal routes.

“What we’re trying to have is to incentivize them to come to the ports of entry instead of in between the points of entry,” Secretary of Homeland Security Alejandro Mayorkas said of migrants on Sunday, speaking to reporters on the way to El Paso.

Mayorkas on Sunday looked to draw a distinction between a new regulation proposed by the Department of Justice last week and a similar, Trump-era rule known as a “transit ban.”

“It’s not a ban at all,” Mayorkas said of the proposal, which — similar to the Trump-era policy — would require migrants to first be turned away from safe harbor in another country before applying for asylum in the United States.

Biden’s visit to El Paso comes amid criticism from Republicans for his administration’s immigration policies, particularly in the face of the possibly imminent end of Title 42, an enforcement mechanism used by both the Biden and Trump administrations to quickly expel millions of people.

“El Paso is a place where, of course, we’ve seen an acute challenge,” Mayorkas said. The administration has surged 100 border agents to the city, and plans to open a new soft-sided migrant processing facility there on Tuesday, he said.