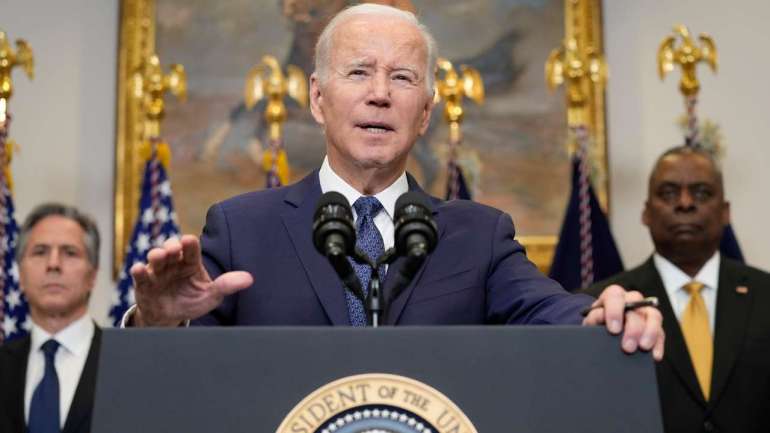 “Putin expected Europe and the United States to weaken our resolve. He expected our support for Ukraine to crumble with time. He was wrong,” Biden said, referring to Russian President Vladimir Putin. “These tanks are further evidence of our enduring, unflagging commitment to Ukraine and our confidence in the skill of the Ukrainian forces.”

Biden approved the tanks as part of a $400 million procurement through the Ukraine Security Assistance Initiative, a fund set aside by Congress to support Ukraine. The U.S. will now sign contracts for the 31 Abrams tanks, along with 120mm rounds and other ammunition, eight tactical recovery vehicles, other support vehicles and equipment, training, maintenance and sustainment, according to the State Department.

The news comes after weeks of discussions between U.S. and European leaders, particularly the Germans, who have long resisted sending their own Leopard 2 tanks. Biden has spoken with German Chancellor Olaf Scholz multiple times this month about providing assistance to Ukraine, and the two nations announced last month that they would send Patriot missile systems to help defend Ukrainian cities, said a senior administration official, speaking on condition of anonymity ahead of the announcement.

Top U.S. officials urged Germany to send their Leopard 2s, which are abundant across Europe and easier for the Ukrainians to use and maintain than the Abrams. But Berlin stood firm, with senior German leaders privately telling Washington that they would only send Leopards if the U.S. sent Abrams.

The president knew Ukraine needed Leopards on the battlefield as soon as possible, so he worked with his national security team to approve the Abrams. He ultimately decided to send American tanks after Austin’s recommendation, according to two other U.S. officials.

Biden “knew the only way Germany would do Leopards is if we did Abrams and allied unity is the most important thing to him. So Secretary Austin sent a proposal on how to make it happen,” one of the officials said.

The U.S. could have sent just one tank to seal the deal with Germany, but Austin decided to send a full Ukraine battalion, said the second U.S. official. This shows the decision was “not a symbolic gesture, but something the secretary thought was the right thing to do.”

But asked on Wednesday whether Germany had forced Biden’s hand by insisting it would send Leopards only if the U.S. sent Abrams, the president responded in the negative.

“Germany didn’t force me to change my mind,” he responded. “We wanted to make sure we were all together. That’s what we were going to do all along. And that’s what we’re doing right now”

“With spring approaching, Ukrainian forces are working to defend the territory they hold and preparing for additional counteroffensives to liberate their land,” Biden said. “They need to be able to counter Russia’s evolving tactics and strategy on the battlefield in the very near term. They need to improve their ability to maneuver and open terrain, and they need an enduring capability to in turn defend against Russian aggression over the long term.”

As news of Biden’s decision emerged in media reports Tuesday, including POLITICO, the government in Berlin announced on Wednesday that Germany and its European partners planned to “quickly” send two Leopard 2 tank battalions to Kyiv. Poland, Spain, Norway and Finland are also likely to join in the coalition of nations sending Leopards.

The decision comes after Pentagon leaders argued publicly and privately that now may not be the right time to send the Abrams. The tanks are too complicated for Ukrainian forces to learn to operate quickly and maintain on the battlefield, they argued.

“The Abrams tank is a very complicated piece of equipment. It’s expensive, it’s hard to train on. It has a jet engine, I think it’s about three gallons to the mile of jet fuel. It is not the easiest system to maintain,” said Colin Kahl, the Pentagon’s top policy official, after a trip to Kyiv. “It may or may not be the right system.”

The administration’s thinking on the challenges the Abrams presents hasn’t changed. But the decision was made to procure them now so that when they arrive on the battlefield, Ukrainian forces will be able to maintain and operate them.

Procuring the weapons through the assistance initiative means it will be months before Ukraine actually gets them.

“The Abrams tanks are the most capable tanks in the world. They are also extremely complex to operate and maintain,” Biden said. “So we’re also giving Ukraine the parts and equipment necessary to effectively sustain these tanks on the battlefield. We’ll begin to train Ukrainian troops on these issues of sustainment, logistics and maintenance as soon as possible.”

Speaking on MSNBC after the announcement, National Security Council spokesperson John Kirby insisted that while the U.S. never took tanks off the table, officials did speak openly about the challenges that would come with supplying them.

“They are the most sophisticated in the world, as you noted. They do require a pretty hefty supply chain. They’re gonna require some unique maintenance and operational requirements on the Ukrainians, which is why we want to make sure we get them trained up,” he said. “The idea is really to show we have a long-term commitment to the kinds of fighting we think the Ukrainians are going to be doing.”

Another reason to procure the Abrams through contracts rather then sending them directly from DoD stocks is because the Pentagon does not have sufficient tanks in its inventory to transfer them to Ukraine, said a second senior administration official.

“As with other capabilities, you’ve seen us do this before if we do not have readily within U.S. stocks, then we go the procurement route to make sure that we can procure the right capability for Ukraine,” the person said. “That is what we’re doing here with the Abrams.”

The M1s will build on the capabilities the Pentagon has provided in previous aid packages, including hundreds of armored vehicles, air defenses and artillery shells, officials said.

DoD is now working through the challenges of delivering the Abrams and supporting them on the battlefield. The military will be setting up a “very careful” training program to teach the Ukrainians how to maintain, sustain and operate the weapons, “which do require a good deal of assistance,” the official said.

In addition to the tanks themselves, DoD is also procuring eight M88 recovery vehicles, which are designed to repair or replace damaged Abrams parts during a fight, as well as extricate vehicles that become bogged down. These vehicles “go with the Abrams to be able to provide coverage of your operation, to make sure Ukrainians will be able to keep these Abrams up and running,” the official said.

At the same time, DoD is training Ukrainians on combined arms maneuver tactics, which will allow Ukrainian forces to integrate the Abrams and other armored capabilities into their overall operations.

All of these weapons are aimed at helping Ukraine continue fighting Russia over the coming weeks and months, particularly in the wide-open terrain of the northeastern Donbas region, said a third senior administration official. The Abrams, in particular, is reflective of the administration’s long-term commitment to the war.

“We’ve said all along, the capabilities we’re going to provide are going to evolve with the needs of the war. And I think that’s what you’re seeing here,” said the third senior administration official.