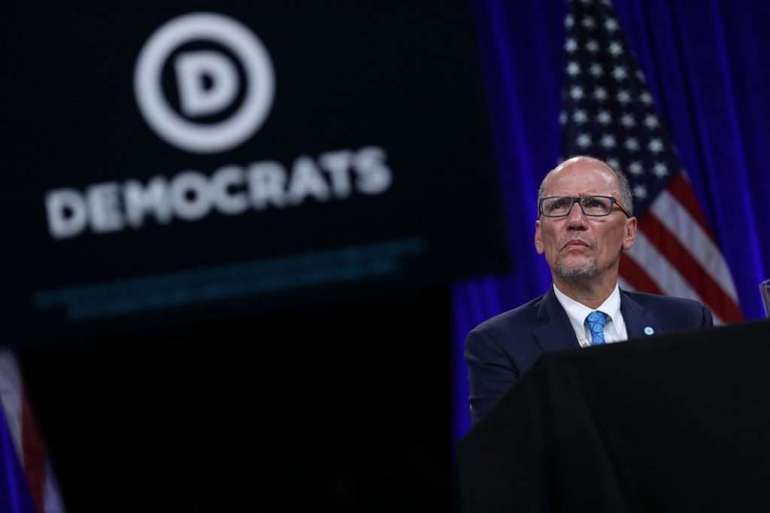 The message on Medicare springs from Trump’s press conference on Saturday when the president said if he won reelection he planned “to forgive these taxes and make permanent cuts to the payroll tax.”

“One of [Trump’s] biggest broken promises was the assurance that he would defend Social Security and Medicare,” said Democratic National Committee Chair Tom Perez Monday afternoon on a call with reporters. “We know now that that was another lie.”

The accusation that Trump was using his payroll tax plan — part of his response to the damage the coronavirus pandemic has wrought on the economy — to gut entitlements began right after Trump unveiled the order on Saturday evening from his golf club in Bedminster, N.J.

“We’re disappointed that instead of putting in the work to solve Americans’ problems, the president instead chose to stay on his luxury golf course to announce unworkable, weak and narrow policy announcements to slash the unemployment benefits that millions desperately need and endanger seniors’ Social Security and Medicare,” House Speaker Nancy Pelosi and Senate Minority Leader Chuck Schumer said in a joint statement.

The directive’s actual hit to Social Security’s trust fund should be “negligible,” according to Marc Goldwein of the nonpartisan Committee for a Responsible Federal Budget. “Basically, insolvency could occur a week earlier,” Goldwein said. “And probably less.” But that forecast may get lost in the preelection battles.

Trump’s executive actions followed a breakdown of negotiations with Congress. Along with the payroll tax deferral, the president also said he would boost unemployment insurance, pause student loan repayments, and address evictions. But the efforts are widely viewed as symbolic, and Democrats are also threatening legal action amid questions about White House authority to implement the sweeping policies.