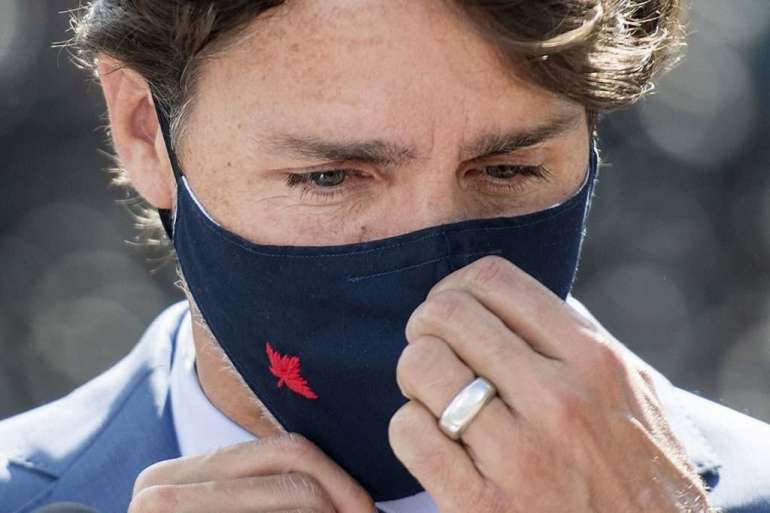 These are among the issues Trudeau wants to tackle in his long-term recovery plan. In August, he abruptly shut down Canada’s Parliament for five weeks, promising to reset the government’s agenda in a speech from the throne on Sept. 23. Those remarks will trigger a confidence vote his minority government must win to survive. After several months dominated by scandal, it’s a chance to turn the page.

The senior official, speaking on condition of anonymity, said the federal deficit — pegged at a record C$343 billion this year — will likely rise again before it comes down. The current crisis “demands an activist government,” the official said, claiming big spending can be justified for the time being due to historically low interest rates.

However, Trudeau’s response to the pandemic, largely well-received by Canadians during the early months, came under fire this summer thanks to a C$900 million student grant program that was outsourced to an organization with ties to Trudeau’s family and to his then-finance minister, Bill Morneau. Morneau resigned last month amid rumors of a falling-out between him and Trudeau over the pandemic response, and was replaced by Freeland, who had previously stickhandled the Canada-U.S. relationship through the USMCA negotiations.

The scandal, involving the Toronto-based WE Charity, was the latest of several ethical controversies involving the prime minister.

“I think those that were already prone to thinking that Justin Trudeau had ethical challenges, this will cement that observation,” said Kate Harrison, a consultant and former Conservative staffer.

The controversy has also left room for the opposition to cast doubt on whether the Liberals are best positioned to manage the economic recovery.

“[Trudeau] has used the crisis as an excuse to help his friends, yet again,” said Conservative Leader Erin O’Toole during a news conference last week, shortly after he was elected leader on Aug. 24. “It’s time to stop catering to insiders and special interests. It’s time to put working Canadians first.” The Conservatives have also accused Trudeau of proroguing Parliament to shut down committee investigations of the scandal.

Still, it’s not clear the WE controversy will seriously damage the Liberals’ electoral prospects. In fact, recent polling suggests Trudeau would fare well in a fall election, and that the Conservatives have not seen a bump in support since O’Toole’s victory.

For the time being, the Liberals also benefit from the fact that O’Toole is relatively unknown and will need time to sell Canadians on his vision for the pandemic recovery. A former military officer who served as veterans affairs minister in the Conservative government of Stephen Harper, O’Toole won the leadership after campaigning to the right of his chief rival, former cabinet minister Peter MacKay. He now has to unite his own party and find a way to broaden its appeal.

O’Toole has acknowledged he’s not well-known in Canada, but is trying to use that to set himself apart from Trudeau. “I have no famous name,” he likes to say. “I just fight for Canadians.”

On the Covid-19 response, the Conservatives will walk a fine line between advocating fiscal responsibility and recognizing that many Canadians want to see changes to the social safety net and aren’t overly concerned about big deficits.

Harrison said the challenge for the party is not to oppose all new spending and “come across as angry Scrooges,” but to provide “targeted support to the most vulnerable as opposed to providing nationalized plans.”

“[O’Toole] knows it’s not enough to just criticize what the Liberals are doing,” she said. “What is the alternative vision you’re going to put in the window?”

The Conservative leader has made clear he’s not looking for an election this fall, but has suggested the Liberals may try to send Canadians to the polls. “If Mr. Trudeau thinks he can play some games with a new leader and force an election, we will be ready,” O’Toole said last week.

To date, only one party — the sovereigntist Bloc Québécois — has spoken openly about trying to force an election. Harrison said the prospect of winning a majority government before O’Toole has had a chance to build his brand might appeal to the Liberals, but the possibility of a second wave of Covid-19 would likely turn voters off the idea of heading to the polls anytime soon. The U.S. election in November is another deterrent, she said. “I think it’s still pretty low likelihood.”

Trudeau says the Liberals don’t want an election but are looking instead for parliamentarians to approve their new mandate. “When we return … we will be putting the vision of this government for a better, greener, stronger Canada to a vote in the House of Commons,” he said Monday. “That is democracy in action.”

To win that vote, they will need the support of only one opposition party, and currently, the left-of-center New Democratic Party (NDP) seems most likely to give it.

“We’re not looking for an election,” NDP Leader Jagmeet Singh said in an interview. “We’re looking to keep on fighting for people.”

Singh is calling for the federal government to spend more on schools, child care and fighting climate change — issues that dovetail with Trudeau’s own talking points. The NDP has largely supported the Liberals through the pandemic, though Singh said his party has forced the government to expand financial aid to more people, including students, seniors and people with disabilities.

Singh, like Trudeau, believes this is a moment for big change. “There’s decisions we can make now to help us recover that will actually help transform the next couple decades,” he said.

Still, winning parliamentary approval is only one part of the challenge ahead. The Liberals seem ready to bet that Canadians will welcome more spending if it will fill some of the holes laid bare by the pandemic. But the response of some business groups to the idea of big outlays on social and environmental initiatives is decidedly more cautious, particularly given the national debt is projected to top C$1.2 trillion by March.

“The economic recovery is going to be business-led,” said Trevin Stratton, chief economist with the Canadian Chamber of Commerce. “Now that we’re starting to reopen, we need to have a plan to transition away from some of the emergency subsidies and focus on growth.”

Stratton said the government needs to “look closely at what is the return on investment” of any stimulus spending, and said Ottawa should cut regulatory gridlock to help the economy bounce back.

Trudeau must also decide how much weight to put on a climate-focused recovery, when issues like employment insurance and child care have suddenly gained new urgency.

Despite having made noises about a green recovery for months, the Liberals have yet to announce anything concrete. A number of advocacy groups have been calling for big spending on building retrofits, zero-emission vehicles and long-term investments in areas like hydrogen production. But it may be tricky to demonstrate how these initiatives benefit those hardest hit by the pandemic, including women and people with low incomes or precarious work.

Sarah Petrevan, policy director with Clean Energy Canada, claimed a clean recovery package will address equity issues as well — home retrofits lead to cost savings, she pointed out. “Certainly, this government has made it clear that any economic recovery package is going to be clean,” she said.

Last December, after the Liberals were reelected with a minority government, Canada’s governor general delivered a speech from the throne that focused in part on the Liberals’ ambitious new target to achieve net-zero emissions by 2050. Days later, the first Covid-19 cases would be reported in Wuhan, China.

“The throne speech we gave eight months ago had no mention of Covid-19, had no mention of rebuilding an economy devastated … by a terrible global pandemic,” Trudeau said Monday, by way of explanation for the parliamentary reset.

The prime minister clearly still wants to be responsible for historic change, though the goalposts have shifted. “This is our moment to change the future for the better,” he said last month. “We can’t afford to miss it because this window of opportunity won’t be open for long.”