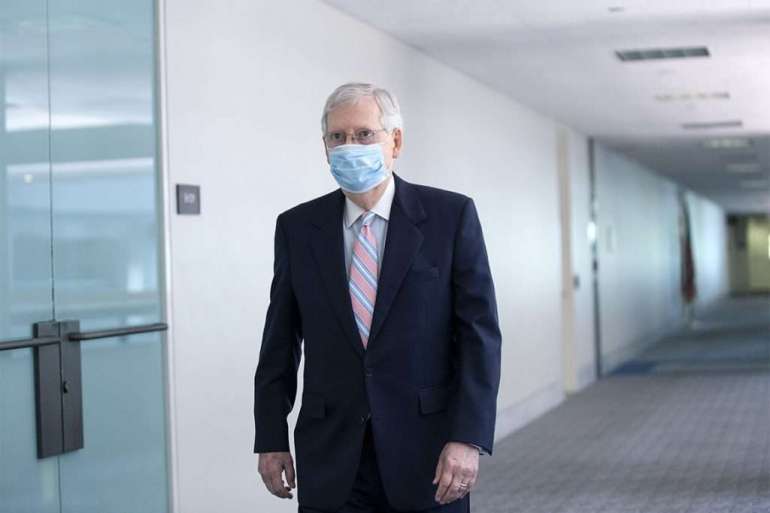 Senate Republicans are optimistic that the vast majority of the conference will support the measure but there hasn’t yet been a final whip count. The Senate will vote on the bill Thursday.

“The American people don’t need us to keep arguing over what might be perfect, they need us to actually make a law,” McConnell said Tuesday. “We’re going to get stonewalling of Democratic leaders out from behind closed doors and put this to a vote out here on the floor. And it’s going to happen this week.”

Crammed living quarters. No time off. A lack of protective gear. We break down how decades of workplace issues created the “perfect storm” for a coronavirus disaster among farmworkers.

While Republicans acknowledge that their proposal likely will not clear the 60-vote threshold to move forward in the Senate, they view the effort as a way to pressure Democrats into caving on their demands.

Democratic leaders and the White House failed to come to agreement on a relief measure during the August recess, and Congress is only in session for a few weeks before members go home to campaign.

Even before the Republican plan was introduced, Speaker Nancy Pelosi (D-Calif.) and Senate Minority Leader Chuck Schumer (D-N.Y.) panned the “emaciated” GOP proposal, saying in a joint statement that it is “headed nowhere” and only intended to help vulnerable Senate Republicans with a “check the box vote.”

Democrats have been pushing the more than $3 trillion relief bill the House approved in May.

“If anyone doubts McConnell’s true intent is anything but political, just look at the bill,” Pelosi and Schumer said. “This proposal is laden with poison pills Republicans know Democrats would never support. “

The GOP proposal will also include a two-year tax credit for donations to scholarships, grants and other organizations, after a push from Sen. Ted Cruz (R-Texas.). In addition, the proposal includes $15 billion for child care grants, $20 billion in farm aid, $500 million for fisheries. It would also forgive small business loans up to $150,000.

The proposal would also provide $10 billion to the U.S. Postal Service, by converting a loan into a grant.

But at least one Republican senator remains unconvinced by the latest effort. Sen. Rand Paul (R-Ky.) said Tuesday he’s “not for borrowing any more money.”

In addition to negotiating a coronavirus relief bill, the Senate also needs to fund the government past September 30. Pelosi and Treasury Secretary Steven Mnuchin came to a tentative agreement last week to use a short-term spending bill to avoid a government shutdown.

Senate Appropriations Chairman Richard Shelby (R-Ala.) said Tuesday he also spoke to Mnuchin for 30 minutes about a “clean” short-term funding bill which could fund the government until December.

“The clock’s ticking,” Shelby said. “It doesn’t seem promising at the moment on stimulus, you guys know all of this. So if we don’t get a stimulus then the only game in town would be a few nominations and the CR, funding the government.”