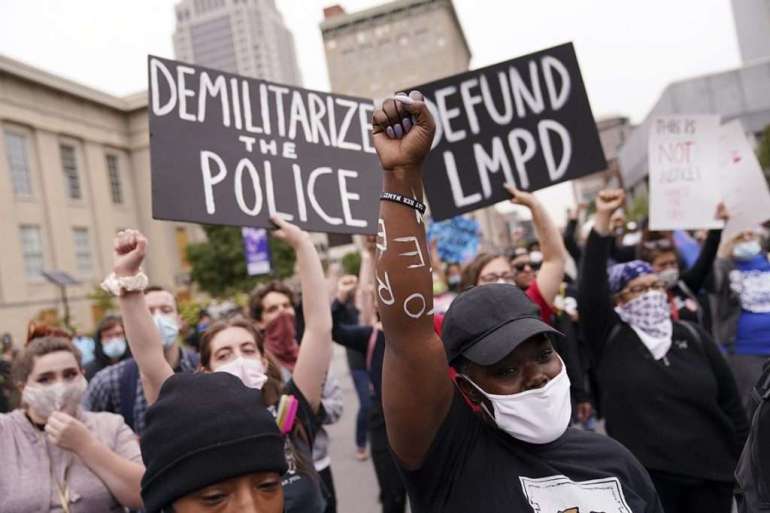 At the time that George Floyd, a Black Minnesota man, was killed by a white police officer on Memorial Day, at least 23 state legislatures had already adjourned for the year. And sessions in Arizona and Oklahoma wrapped up shortly thereafter — on May 26 and May 29, respectively. A handful of legislatures, however, have since held special sessions to address issues like the coronavirus and police reform.

Police reform advocates are hopeful that policies that went unaddressed due to time constraints in statehouses will be revisited when legislators reconvene next year, but there is a risk that, by then, the moment sparked by Floyd’s death may have passed.

Shortly after a video of Floyd being choked under the knee of a Minneapolis police officer began circulating online, protesters across the country poured into the streets to rally against police brutality. Activists say the reaction, coming in the middle of a deadly pandemic that has disproportionately impacted people of color, felt different than the aftermath of past police shootings, and gave them an opening to push for what they maintain are commonsense demands, even as the most progressive activists seek changes like “defunding the police.”

Public opinion, however, has retrenched since then. After a summer surge in popularity for the Black Lives Matter movement, a POLITICO/Morning Consult poll this month showed that favorable views of BLM had dropped 9 percentage points since June, including a 13-point dip among Republicans.

In interviews, activists who have been involved in state legislative battles this year acknowledged that change won’t come any easier in the new year.

Police unions “have pushed back on every single piece of reform pushed” in Massachusetts in 2020, said Jamarhl Crawford, an activist and member of the Boston Police Reform Task Force. But “if we can’t win now,” he said, “we suck.”

Criminal justice organizer Scott Roberts also pointed the finger at the unions. “They, to my knowledge, haven’t seen a reform yet that they like,” said Roberts, senior director of criminal justice campaigns at Color of Change, a civil rights advocacy group that pushed for murder charges against the officer that shot and killed Breonna Taylor. “The police unions aren’t really a group that’s going to come to the table and say, ‘Hey, let’s compromise.’ They’re real hard-liners. I would classify them as extremists, frankly.”

Former Boston Police Commissioner Ed Davis acknowledged: “The unions do carry a lot of sway. But they’re not a monolithic power, and there’s a lot of legislation that’s been passed over the years that police unions have been opposed to. I don’t think it’s a case of, ‘We’ll never win this.’ I think it’s issue by issue.”

Dave Bicking, a board member of the Minneapolis-based Communities United Against Police Brutality, framed the Minnesota measures that passed as “better than nothing,” but expressed hope that lawmakers will return to more substantive legislation next year.

Leslie Rosedahl, a spokesperson for the Minnesota Police and Peace Officers Association, said its staff, lobbyists and allies “worked comprehensively” with Republican and Democratic legislators in both chambers and Democratic Gov. Tim Walz “to help provide our best counsel on the proposals.”

“We utilized experts on arbitration, use of force, and more, to educate elected officials on the facts about policing, and our desire to protect and serve,” Rosedahl said, adding that thousands of supporters contacted state legislators on behalf of law enforcement. “Our work made a difference.”

Even in liberal California, a state where Democrats control all the major levers of government, the most ambitious bills introduced in the wake of Floyd’s death failed to make it through the legislative session that ended last month. Two measures ultimately reached Gov. Gavin Newsom’s desk: one to ban carotid restraints, which cut off blood flow to the brain, and another to require independent investigations of officer-involved shootings when requested by local law enforcement agencies or district attorneys.

But the highest-profile bills, including those that would have allowed California to decertify problematic officers and established the strictest duty-to-intercede standard in the nation, never even got a vote.

The most contentious fight proved to be over decertification, a process that would prevent officers who’ve committed serious offenses from returning to departments. California is one of only five states that doesn’t have a system for pulling an officer’s badge, a fact that both lawmakers and law enforcement groups say must change in order to rebuild public trust.

State Sen. Steve Bradford of Los Angeles County, who authored the bill, said that in spite of a vocal outpouring of support for police reform from lawmakers, the possible political ramifications of voting against law enforcement proved to be a barrier for many.

“This would have been an opportunity for some real profiles in courage,” he said. “I understand it’s an election year, but I would have been more concerned with the thousands of Californians who have demonstrated over the last five months in the streets wanting police reform, more so than the last-minute opposition of police unions.”

Fraternal Order of Police National President Patrick Yoes defended the role police unions are playing in the debate over policing reforms. He cast the FOP, which endorsed President Donald Trump’s reelection earlier this month, as a willing partner that wants to be part of conversations around improving policing and the criminal justice system. But he stressed that those conversations have to be fact-based, not knee-jerk reactions based on emotions.

Noting that more than 200 police officers have died from Covid-19 this year, Yoes said that “some 800,000 [officers] are putting their lives in danger every single day to protect communities, and what we’re doing is we’re focusing on one, two, maybe 10 incidents that happened out of millions and millions and millions of public police contact.”

Yoes also noted that the FOP was involved in Trump’s executive order on policing, the First Step Act and Senate Republicans’ recent JUSTICE Act, and said that he spoke to House Speaker Nancy Pelosi and Congressional Black Caucus Chairwoman Karen Bass about House Democrats’ George Floyd Justice In Policing Act after it was introduced. That legislation has not gotten a vote in the Republican-controlled Senate.

Colorado is among the few states that have passed a sweeping reform package this year, with Gov. Jared Polis signing legislation that would, among other things, end qualified immunity, which protects officers from liability for constitutional violations that don’t break “clearly established” law. The Denver Post reported last month that more than 240 police officers statewide had resigned or retired since the bill was signed in June, though it was unclear how many departures were directly related to the new law.

An effort to end qualified immunity died in Virginia’s ongoing special legislative session earlier this month and is currently being debated in Massachusetts.

“That’s really, I think, where the battle lines are being drawn,” said Carol Rose, executive director of the American Civil Liberties Union of Massachusetts. “The opposition that the police unions have mobilized and the disinformation campaign that the police unions have mobilized around holding police officers accountable by limiting qualified immunity is gonna make it hard to pass in this session, but we remain cautiously optimistic.”