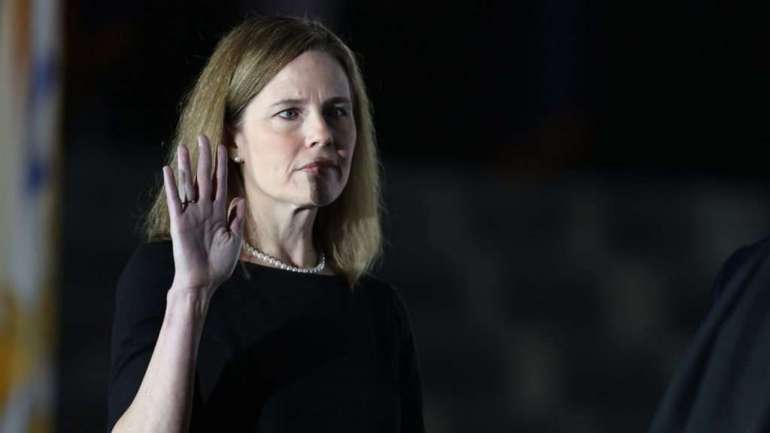 “These are not the days when Justice [Antonin] Scalia was confirmed 98-0 and Justice [Ruth Bader] Ginsburg was confirmed 96-3,” McConnell (R-Ky.) acknowledged ahead of the vote, claiming Democrats only want “activist judges” on the court and “now see ‘legitimate defeat’ as an oxymoron.”

The drive to confirm Barrett was, in itself, unprecedented; the Senate had never considered a Supreme Court nominee this close to an election, a fact that Democrats consistently highlighted. It led to an explosion in fundraising for both sides, with Democratic campaigns raking in more than $1 billion since Ginsburg’s Sept. 18 death.

Barrett, just the fifth woman ever confirmed to the court, will shift its ideological balance to the right, replacing Ginsburg, the liberal icon who died last month from complications due to cancer. Her confirmation caps off Trump’s and McConnell’s dramatic reshaping of the federal judiciary over the last four years; Barrett is the 220th Trump-nominated federal judge confirmed by the Senate, an achievement that will reverberate long after the 2020 elections.

Speaking at a ceremonial swearing-in ceremony at the White House on Monday night, Barrett pledged to act “independently of both the political branches and of my own preferences,” reiterating her vow during her confirmation hearings to set aside her personal beliefs.

After an overnight session that lasted more than 30 hours, the Senate confirmed Barrett by a vote of 52 to 48, with only Sen. Susan Collins (R-Maine) siding with all Democrats to oppose her. With her confirmation, Trump has now appointed a third of the court’s nine justices — Neil Gorsuch, Brett Kavanaugh, and Barrett.

Democrats, who were essentially powerless in trying to delay the nomination, panned the confirmation process as illegitimate and a blatant abuse of power by McConnell. They argued that seating Barrett on the high court threatens health care for millions of Americans, abortion rights, gun control, and other issues.

“Today … will go down as one of the darkest days in the 231-year history of the United States Senate,” Senate Minority Leader Chuck Schumer (D-N.Y.) said. “Let the record show that the American people, their lives and rights and freedoms, will suffer the consequences of this nomination for a generation.”

Republicans saw in Barrett a brilliant and highly qualified jurist who would uphold the rule of law and adhere to the late Justice Antonin Scalia’s “originalist” judicial philosophy. They said Democrats were engaging in scare tactics that had no basis in reality.

Collins, facing a difficult reelection fight, said her vote indicated her opposition to confirming a nominee to the high court before the election, and did not reflect her views on Barrett’s qualifications.

Sen. Lisa Murkowski (R-Alaska) voted in favor of Barrett despite similar opposition to the process by which Barrett’s nomination was shepherded through the Senate, insisting that those circumstances should not be held against Barrett.

During the vote, Democrats left the chamber immediately after recording their vote, while Republicans largely remained seated until the conclusion. Some Democrats didn’t even step foot into the chamber while voting; some motioned to the clerk from a doorstep. When the vote was closed, the GOP side of the chamber stood up and applauded; Murkowski remained seated and did not clap.

Barrett was a law professor at Notre Dame before Trump nominated her in 2017 to serve on the Seventh Circuit Court of Appeals. The Senate confirmed Barrett to that position on a 55-43 vote, with a handful of Democratic votes.

But this year is different, and Schumer was able to unite his caucus around familiar messages.

Democrats have centered their opposition to Barrett’s nomination around McConnell’s decision to block former President Barack Obama’s nominee, Merrick Garland, in 2016. At the time, McConnell cited the proximity of the presidential election, saying the open Supreme Court seat should be filled by the next president.

McConnell has said the circumstances in 2016 were different because the White House and the Senate were controlled by different parties. Still, Senate Judiciary Committee Chairman Lindsey Graham (R-S.C.), who oversaw Barrett’s confirmation process, said in 2018 amid the ugly confirmation fight over Kavanaugh that he would not advance a Supreme Court nominee in an election year, no matter who was president.

The tensions have led to increased support among Democrats for progressive-backed initiatives including getting rid of the legislative filibuster, which would allow bills to pass with a simple majority vote, as opposed to the requisite 60 votes. Activists have also called on Democrats to “pack” the Supreme Court if they win control of the Senate.

In addition to their objections over the process, Democrats focused almost entirely on the Affordable Care Act. The Supreme Court is set to take up the Trump administration’s bid to invalidate the 2010 health care law beginning Nov. 10, and Democrats have said Barrett would be the deciding vote to kill Obamacare.

At her confirmation hearings, Barrett offered few hints about how she might rule on cases involving the health care law, saying only that she was not “hostile” toward it. But Democrats highlighted her past criticisms of Chief Justice John Roberts’ decision to uphold Obamacare in 2012, in addition to Trump’s stated vow to appoint judges to the federal bench who would vote to overturn it.

The confirmation vote comes amid fears of another coronavirus outbreak at the White House, this time involving Vice President Mike Pence’s inner circle.

Pence did not attend Monday evening’s vote after some of his top aides, including his chief of staff, tested positive for Covid-19. Before news broke of their diagnoses, Pence had said he would preside over the Senate for the vote, as he has done in the past for significant votes.

The White House held a swearing-in ceremony for Barrett in the Rose Garden immediately following the Senate’s vote. It was a similar set-up when Trump unveiled Barrett as his choice, and several attendees at the first largely mask-less event contracted Covid-19, including Sens. Mike Lee (R-Utah) and Thom Tillis (R-N.C.).