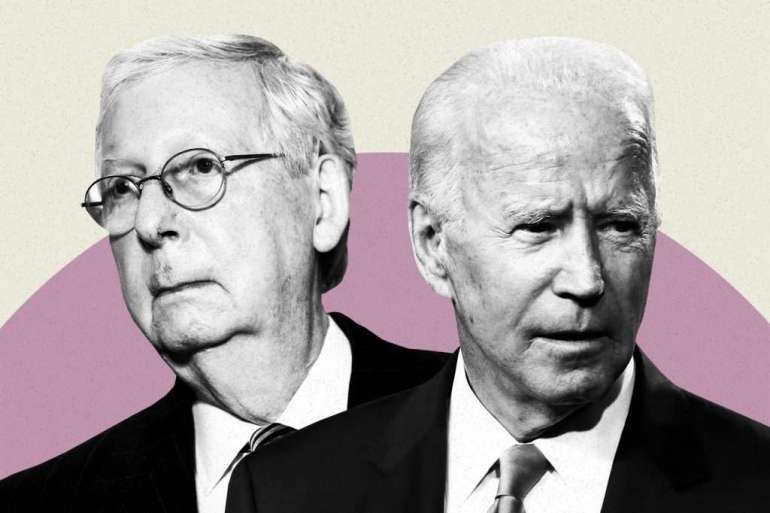 But the dynamics have changed, provided that McConnell ekes out wins in Georgia runoffs and hangs on as majority leader and Biden finishes off President Donald Trump’s chances in the Electoral College over the coming days.

And perhaps most importantly, Biden and McConnell have a real relationship — forged over the years as Senate colleagues and combatants. McConnell was the only Senate Republican to attend the funeral for Biden’s son Beau in 2015, and he’s largely stayed away from GOP attacks on Biden’s other son, Hunter.

“They have negotiated big things before. They’ve come through some very hard and even bitter fights over judicial confirmations,” Sen. Chris Coons (D-Del.), a close Biden ally, said in an interview. “But I think they’ve managed to stay friends or have a working, professional relationship even in the hardest of times.”

McConnell and Biden may have reason to find some common ground. Under Trump, McConnell has already succeeded in his longtime goal of reshaping the judiciary; soon his role will shift to the most powerful Republican in Washington who must also defend a razor-thin majority. And Biden was elected running not on the most liberal agenda but in part on his ability to work with the other side, predicting “you’ll see an epiphany occur among many of my Republican friends” if Trump loses.

“I campaigned as a Democrat, but I will govern as an American president,” Biden told reporters Wednesday. “The presidency itself is not a partisan institution.”

Democratic officials are already acknowledging that their legislative ambitions are much smaller than they were a week ago, but they think there is room for agreement on things like a coronavirus aid package, infrastructure, higher education and rural broadband. Republicans mostly agree.

Both old bulls of the Senate before their time at the highest rungs of American politics, McConnell and Biden will have to rekindle their old give-and-take almost immediately. Biden’s entire Cabinet will be at the whims of whether McConnell even puts his nominees up for a vote, and his appointments are sure to be more centrist than if Schumer were in charge of the Senate.

There’s no hope of liberal icons like Bernie Sanders and Elizabeth Warren winning Cabinet confirmation — though that reality may also avoid intraparty fights among Democrats seeking to shape a Biden administration.

Some Republicans still grouse about the delays that Democrats put on Trump’s nominees, raising the prospect of a protracted fight right out of the gate for Biden as he staffs up amid a pandemic and economic crisis. GOP senators looking at a presidential run in 2024 will have further political incentive to gum up the works in a bid for the spotlight.

Joe Biden is closing in on a victory. But he’s staring at a deeply divided nation — and an opponent who’s refusing to accept the results. POLITICO’s Natasha Korecki breaks down how Biden is preparing for a rocky transition.

But Manchin argued that “this country doesn’t want lightning rods” in the Cabinet and that Biden and McConnell could effectively agree on a group of nonideological nominees that wouldn’t become all-out brawls between the two parties.

Things are certainly not all warm and fuzzy between McConnell and Biden. Biden took a shot at McConnell in September over Congress’ inability to pass a new coronavirus relief bill, warning that “states are in real trouble, and to quote my good friend Mitch McConnell, he said, ‘Let the states go bankrupt.’” McConnell said earlier this year that Biden would have to release more records to deal with the sexual misconduct allegation against him by former aide Tara Reade.

Yet beneath the sniping is a deep relationship — even friendship — that could challenge the predictions of absolute gridlock already emanating from the Capitol.

McConnell referred to Biden on Wednesday as his “old friend.” And he paid public tribute to Biden during a 2016 speech just before the vice president left office, calling him a “trusted partner.” In 2011, Biden appeared at the McConnell Center in Kentucky, observing that the audience wants “to see whether or not a Republican and Democrat really like one another. Well, I’m here to tell you we do.”

“It’s a long relationship, and they understand each other,” said one Republican senator who knows both men.

McConnell and Biden declined to comment for this story. And Trump’s Twitter rants against vote counting have mostly frozen up Republicans from talking about how they would work with a President Biden. The GOP is still wary of crossing Trump.

“The Senate Republicans are in a very strong position to steer the next two years for the country, regardless of the outcome. My hope is that President Trump wins,” said Sen. John Barrasso of Wyoming, the No. 3 GOP leader. “Our role is going to be significant.”

Among several agreements that liberals loathed, McConnell and Biden negotiated the “fiscal cliff” deal to raise taxes and cut spending in 2012. Rohit Kumar, McConnell’s domestic policy adviser at the time, said in an interview that Republicans never felt like they “pantsed” Biden in a deal.

“Biden handles negotiations in a very practical matter. ‘You know, we gotta get a deal. You have to trust me when I tell you what I can and can’t do,’” said Kumar, who now helps lead PricewaterhouseCoopers’s national tax office. “That was a pretty stark contrast with how Biden and Obama handled the negotiations.”

The Biden team and Biden himself are thinking through how McConnell as majority leader will reshape his administration and wondering if McConnell will be a deal-maker or the kind of antagonist who said making Obama a one-term president was his top priority, according to an official close with the Biden team.

“Amidst a giant red wall of obstruction, if anyone would be able to squeeze out wins, it’d be Joe Biden working with Schumer and Pelosi,” said Scott Mulhauser, Biden’s deputy chief of staff during the 2012 presidential campaign and the former counsel on the Senate Finance Committee.

And there may be mutual benefits to cutting more deals eight years later: McConnell’s majority faces the real possibility of a wipe-out in 2022 given the number of seats at play, while Biden can avoid some of the ideological schisms within his party on the Supreme Court, health care and the filibuster that might have played out if Democrats held a narrow Senate majority.

Chuck Hagel, who served as Obama’s secretary of Defense and alongside Biden as a GOP senator, expressed optimism about the prospect of bipartisan cooperation.

Biden will be “personally involved. Obama’s style was different,” Hagel said. “Obama didn’t really understand the Congress, the Senate, like Joe does.”