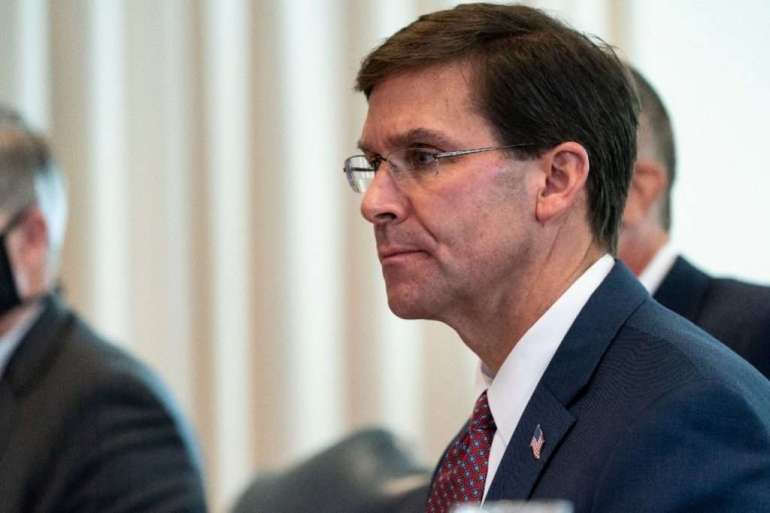 In recent days, Senate leaders have urged the White House to keep Esper in place, said one of the administration officials. Majority Leader Mitch McConnell and Armed Services Committee Chair Jim Inhofe, in particular, have pressured the White House “to not shake things up,” the person said.

“McConnell and Inhofe have made clear their views,” the person said.

Meanwhile, senior Pentagon leaders believe “the temperature has gone far down” recently between Trump and Esper, said a former senior defense official familiar with the discussions. POLITICO reported this week that lawmakers and defense establishment figures were urging Esper to stay on as secretary during what is expected to be a turbulent transition ahead of the inauguration.

“For the good of our country and the brave men and women in uniform, I hope [Esper] will continue to serve for the remainder of the Trump presidency,” Sen. Tim Kaine (D-Va.) said.

A White House spokesperson said Saturday that he had no personnel announcements to make.

“If the president doesn’t have confidence in someone he will let you know. The White House does not speculate or comment on personnel matters,” said White House deputy press secretary Judd Deere.

The news that Esper will likely stay through the inauguration comes months after Trump made clear his irritation with the defense secretary. The president has grown increasingly frustrated with Esper since a rift in June, when the defense secretary publicly declared his opposition to deploying active-duty troops to quash protests against police violence and racial injustice, just days after the president threatened to do just that. Esper’s message and forceful tone rubbed some in the White House the wrong way, two White House aides and two others close to the discussions told POLITICO at the time.

In an effort reminiscent of the derogatory comments Trump made about former Defense Secretary Jim Mattis leading up to his departure, the president has repeatedly undermined Esper in public in recent months, even openly mocking his Pentagon chief. When asked during an August press conference whether he had confidence in Esper’s leadership, Trump referred to him derisively as “Mark ‘Yesper,’” before hinting that he may not be long for the job.

“Mark Yesper? Did you call him Yesper?” Trump said. “I consider firing everybody. At some point, that’s what happens.”

The two have clashed over other issues as well. Trump in June stunned NATO allies and senior DoD leaders when he directed the withdrawal of thousands of troops from Germany. Days later, he blindsided the Pentagon yet again by tweeting his opposition to the removal of Confederate leaders’ names from Army bases, just two days after Esper opened the door to doing so.

Esper also clashed with Trump over the promotion of Lt. Col. Alexander Vindman, the star witness in the impeachment who told Congress that Trump’s July 25, 2019, phone call with his Ukrainian counterpart undermined U.S. national security. Esper approved Vindman’s promotion in June, even though he knew the move could put him at odds with the White House. Esper also effectively banned the public display of the Confederate flag on military installations, despite Trump’s support of such displays as freedom of speech.

Esper has made himself scarce in the weeks leading up to the election, traveling extensively and mostly avoided the press. Just in the past two months, he’s traveled to North Africa, the Mediterranean, the Middle East and India, as well as spots around the U.S.