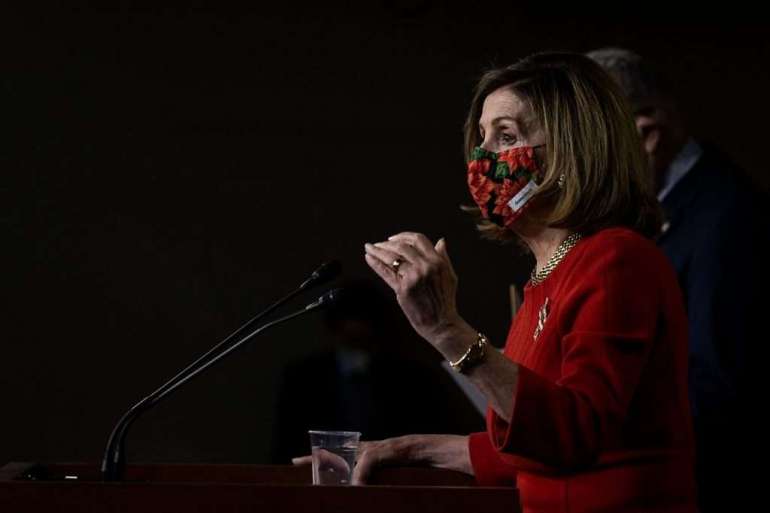 “Yes, there is more work to do and it will cost some money. But it will protect jobs and, most importantly, it will meet the needs of the American people,” Speaker Nancy Pelosi (D-Calif.) said of the bill.

The measure marks Congress’ fifth delivery of relief money since the virus hit the U.S. earlier this year, killing more than 300,000 and shuttering much of the economy.

The total federal response to the pandemic now stands close to $4 trillion. Party leaders spent so long haggling over the final measure, however, that some economists warn it may arrive too late to halt a double-dip recession. It marks a far cry from the swift, bipartisan efforts this past spring, even as the case numbers and death toll have skyrocketed in the succeeding months.

“None of us think this legislation is perfect, but a big bipartisan majority of us recognize the incredible amount of good it will do when we send it to the president’s desk,” Senate Majority Leader Mitch McConnell (R-Ky.) said. “The American people have waited long enough.”

After lawmakers approved four rescue bills in the nascent days of the pandemic, the appetite for bipartisanship significantly waned as the presidential election approached.

But pressure from moderate rank-and-file lawmakers on both sides of the aisle in early December — as well as another brutal surge in Covid-19 cases — spurred serious negotiations among congressional leaders and top Trump administration officials. Adding to the sense of urgency, a slew of critical aid programs are set to expire on Dec. 26.

Lawmakers of both parties acknowledged that the package was far from perfect, with Democrats arguing that it fell short in key areas, such as aid to state and local governments, and Republicans lamenting that it does not provide a liability shield for schools and businesses.

Pelosi and other top Democrats said the recovery bill would be simply a down-payment on a larger package they hope to pass when President-elect Joe Biden takes office in January.

“It is long overdue and insufficient,” House Majority Whip Jim Clyburn (D-S.C.) said of the stimulus bill, calling it a short-term measure. “This package must be viewed only as a down-payment. There can be no greater pursuit in 2021.”

GOP leaders have not committed to another relief effort, though Democrats say the prospects of another bill would be dramatically increased if they can capture the Senate majority in the Georgia runoff elections on Jan. 5. McConnell on Monday said Republicans would “take a look at” Biden’s proposals in the new year.

The pre-Christmas votes capped off an unprecedented run for the 116th Congress, which began in 2019 with a weeks-long government shutdown, included the third presidential impeachment trial in U.S. history, and faced a once-in-a-lifetime pandemic. And there will be more work to do: both chambers are expected to return in the days after Christmas for the first — and only — veto override of Trump’s presidency over the annual defense bill.

“I think everybody is pretty much ready for Christmas,” Sen. John Cornyn (R-Texas) told reporters.

The final week of efforts included a last-minute computer glitch that delayed proceedings for half the day on Monday — a twist that some lawmakers and aides privately quipped felt symbolic of many months of dysfunction on Capitol Hill.

That computer error with the 5,593-page bill was the latest complication for congressional negotiators, who have been repeatedly tripped up by contentious policy provisions — including an issue over the Federal Reserve’s emergency lending powers — during months of stimulus talks.

The White House has signaled that Trump, who has been mostly absent from the negotiations, will indeed sign the measure, which includes more than $300 billion for small business loans, as well as new money for schools, hospitals and vaccine distribution.

The package will also provide billions to struggling sectors like mass transit, movie theaters and performance venues. But others complained they had been left out, including state and local governments and restaurants. And the extra $300-per-week in federal unemployment aid only lasts through March.

Treasury Secretary Steven Mnuchin has said the $600 direct payments will be doled out “very quickly.”

Several lawmakers across the political spectrum had been pushing for $1,200 individual payments, rather than the $600 that was agreed to in the final deal. And progressives had sought a complete moratorium on evictions, as well as cancellation of rent and mortgage payments.

Pelosi said on Monday that Democrats were pushing for the $1,200 direct payments — which were included in the last relief bill — but ran into opposition from Republicans.

“I would like them to have been bigger, but they are significant, and they will be going out soon,” Pelosi said on the floor.

Lawmakers complained that they had little time to actually read the bill — one of the largest ever considered by Congress.

“This is a tough way to legislate, to save everything till the very end and then pass a very large bill,” said Rep. Michael Burgess (R-Texas).

Although congressional leaders finalized the relief deal Sunday evening, lawmakers did not see the text until mid-afternoon Monday.

“It’s not good enough to hear about what’s in the bill. Members of Congress need to see & read the bills we are expected to vote on,” Rep. Alexandria Ocasio-Cortez (D-N.Y.) tweeted as lawmakers waited for release of the text.

Congressional leaders clinched the long-awaited agreement on the stimulus measure after a weekend of fierce clashes over the Fed’s emergency lending powers. But that issue, spurred by Sen. Pat Toomey (R-Pa.), only came up at the last minute.

A deal was in sight as early as last week after negotiators agreed to drop liability reforms and state and local government aid.

As the final major piece of legislation of the 116th Congress, party leaders tacked on several other bills to the spending measure, an annual tradition that lawmakers describe as loading up the “Christmas tree.”

That included a hard-fought bipartisan agreement to protect patients from receiving “surprise” medical bills in addition to a compromise version of an annual authorization for the intelligence community.

The sprawling legislation taken up Monday also included a weeklong spending patch to avoid a government shutdown while the package is printed and finalized for Trump’s signature — a process that typically takes several days for large pieces of legislation.