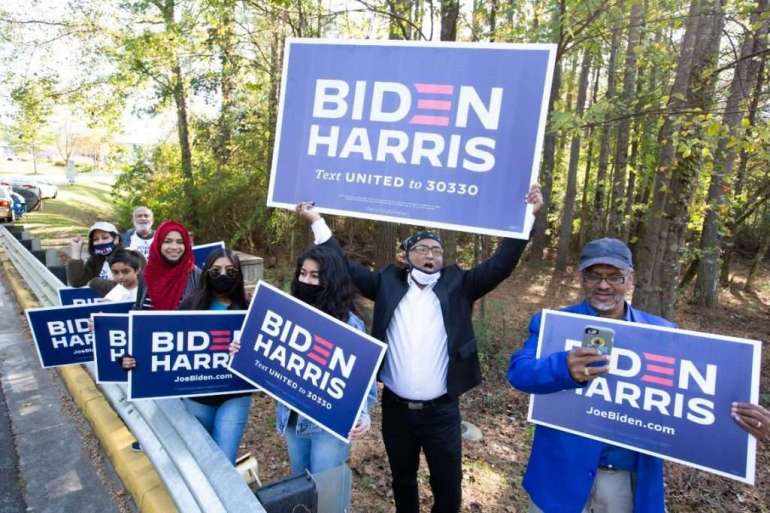 But Biden’s strong showing this year doesn’t mean AAPI voters are sure to lean Democratic. Because AAPI voters are new entrants into politics, and have historically been neglected by both political parties, this increasingly crucial community’s support and influence is up for grabs. And the key to the Georgia Senate runoff might just be smart outreach to them.

AAPI voters, given their diversity of income, age, generation, history and connection to the American experience across 50 ethnicities and over 100 languages, are by no means a solid single bloc. But they are united on one key factor: They want political parties and advocates to cater to them directly and not take them for granted. According to AAPI Data, just 30 percent of Asian American voters surveyed nationally in September said they had had at least some contact from the Democratic Party in the past year. Only 24 percent said they had had contact from the Republican Party. And when these voters do hear from the parties and politicians, the messages often aren’t targeted to them: Campaigns have been known to run English language campaign material through Google translate and think that’s enough.

The recent bump in AAPI voter turnout was fueled not by party or campaign outreach but mostly by civic and grassroots organizations who have experience with consistent, timely messaging to communities of color, non-traditional voters and new Georgians. The candidates vying for attention right now have a lot to learn from these groups.

Campaigns first need to understand how these voters get their information. Every morning, my parents listen to their Vietnamese talking heads on SBTN, or Saigon Broadcasting Television Network, one of the most influential station for Vietnamese living in the United States, and read their Vietnamese-language newspapers. But these more traditional mediums don’t capture the voracious appetite that both older and younger AAPI voters have for social media and platforms. Like my dad, who is obsessed with sharing his Vietnamese poetry with friends, AAPI community members connect primarily on KakaoTalk, a popular Korean instant messaging app, TikTok, WhatsApp, WeChat and Facebook. Campaigns that spend time investing in native language content and ads on these platforms will reach many AAPI voters—at a fraction of the cost of advertising on the mainstream Atlanta airwaves.

There is one big risk with social media, though. Because one in three AAPI community members have limited English proficiency and the group reflects a breadth of diverse languages, these voters are susceptible to mis- and disinformation—for example, claims that falsely label Democrats like Jon Ossoff and Reverend Raphael Warnock as “radical socialists” or “communists.” My parents and many of their friends who announced their support for Democrats in 2020, too, have been accused by conservative Vietnamese American groups of being “Communists” and “socialists,” which couldn’t be farther from the truth. Sometimes this heated discourse has led to my parents simply unfriending users on Facebook; sometimes, though, my parents have become the target of hostile threats.

To counter this alarming trend, the campaigns should also invest in volunteers to closely monitor channels and forums on social media. While groups like VietFactCheck fact-checked, verified and rebutted claims in English and Vietnamese during the presidential cycle, the Senate campaigns should do more in rapid response in these digital spaces with the Jan. 5 runoff in Georgia looming.

The parties also have to know where to look to reach AAPI voters. The Atlanta Metro area counties of Gwinnett, Cobb, Fulton and DeKalb have the largest AAPI communities in Georgia. But with the race likely to be very tight, a narrow focus on the Atlanta area is not an automatic path to victory. There are many rural AAPI voters like my parents who have not traditionally been contacted but are persuadable if campaigns talk about local issues, such as rural health care and small businesses. The AAPI Victory Fund recently found that there are 55,000 rural AAPI votes up for grabs in Georgia—enough to swing the election.

There are also large numbers of AAPI members with strong ties to a particular faith—whether that’s Filipino Americans closely linked to the Catholic church, members of the Korean churches scattered throughout the Atlanta metro area, or AAPI Muslims. Advocacy groups, such as Asian Americans Advancing Justice and the Georgia Muslim Voter Project, have engaged churches and mosques to activate AAPI voters with targeted in-language messaging. But the campaigns themselves have mostly failed to focus specifically on these groups.

None of this outreach will matter if the parties don’t get their messaging right. What messages will get through? Recent polling has found that AAPI communities are more likely to be concerned about the pandemic than the rest of the public. Part of these concerns can be traced to rising anti-AAPI sentiment during Covid-19. (Asian Americans and Pacific Islanders reported over 2,500 reported instances of anti-AAPI hate to Stop AAPI Hate between March and August.) AAPI voters are looking for their politicians to show support and condemn anti-AAPI comments, such as calling Covid-19 the “kung flu.”

AAPI community members have also been disproportionally hit by Covid-19 economically. While Asian Americans and Pacific Islanders make up around 6 percent of the U.S. population, they own 26 percent of U.S. food and accommodation service businesses and 17 percent of U.S. retail businesses—industries that were crushed during the pandemic and still have not recovered. In addition, Georgia farmers have seen an 82 percent decline in revenue. My farming parents can attest: An economic recovery message would resonate with AAPI voters.

The pandemic has also exposed the worst inequities in our health care space. A full third of American nurses who have died from the virus are Filipino American, even though they make up just 4 percent of the nation’s nursing population.

And then there’s the problem of health care in rural America. In March, my family’s closest hospital—Phoebe Putney Memorial Hospital, which serves 800,000 rural Georgians—emerged as the South’s coronavirus epicenter. The pandemic crushed an already overwhelmed and overburdened facility. In April, southwest Georgia became home to an astounding five of the top 10 U.S. counties with the highest Covid-19 death rates. This strain on rural hospitals and the lack of access to health care has only gotten worse in Georgia, where nine counties have zero doctors and 60 counties are without a single pediatrician.

AAPI voters are finally running toward politics knowing that they can make the difference. But it’s these kind of issues—the pandemic, the economy and health care—that AAPI voters want to hear about, on their platforms, in their own languages. With the election in Georgia likely to be decided by a razor’s edge, the campaigns that can do this might just be the ones to carry the state.