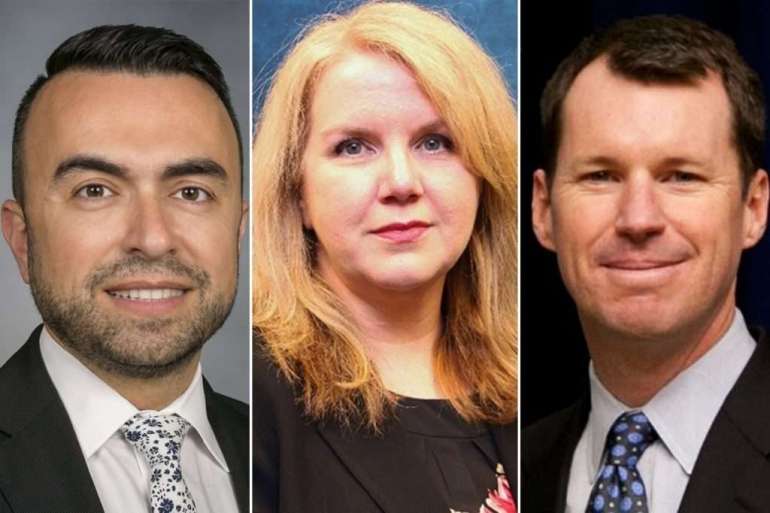 Choucair will be Biden’s point person for expediting vaccine delivery and coordinating with state and local officials. Biden and his allies have credited the Trump administration’s effort to rush Covid-19 vaccine development through its “Operation Warp Speed” initiative but warned that the pace of rolling out shots has fallen behind the administration’s promised goals. Officials had pledged to vaccinate 20 million Americans by the end of the year, but the Centers for Disease Control on Tuesday said that just 2.1 million Americans had received their first shot.

“The Trump administration’s plan to distribute vaccines is falling behind. Far behind,” Biden said in remarks on Tuesday afternoon. “I’ve directed my team to prepare a much more aggressive effort with more federal involvement and leadership to get things back on track.”

Meanwhile, the president-elect chose Carole Johnson, the commissioner of New Jersey’s human services department and a former senior health adviser in the Obama-Biden White House, as the nation’s new Covid-19 testing coordinator. Johnson, who worked on strategies to fight the Ebola and Zika epidemics as a member of the White House Domestic Policy Council’s health team, will focus on expanding tests in schools, nursing homes and other settings — and for high-risk populations that have been hit hard by the pandemic.

Biden advisers said Johnson is expected to take on a more expansive role than Brett Giroir, the Health and Human Services department’s assistant secretary for health, who President Donald Trump tapped to serve as national Covid-19 testing coordinator this year and who was frequently pressed on testing shortages.

“Testing is an area that we believe has been very underutilized and under-resourced, and it’s critical for the effective public health response,” Jeff Zients, Biden’s incoming coronavirus coordinator, told POLITICO. “We need to ramp up testing to include asymptomatics and do more screening.”

Johnson also will chair Biden’s new National Pandemic Testing Board, which the president-elect says will ensure tests are fairly and quickly allocated. Biden has compared the testing board to former President Franklin D. Roosevelt’s War Production Board, which rapidly ramped up production of military vehicles and supplies during World War II.

Additionally, Biden picked Tim Manning, who served as deputy administrator of the Federal Emergency Management Agency for all eight years of the Obama-Biden administration, to be the nation’s new Covid-19 supply coordinator. Manning currently advises the Pacific Disaster Center, which is overseen by the University of Hawaii, and is on faculty at Georgetown University. State officials and public health advocates have criticized the Trump administration for shortages of protective equipment, tests and other supplies during this year’s Covid-19 response, and Biden advisers said that Manning will be empowered to head off future challenges.

Biden and his advisers say that the three officials will each be addressing the top priorities to contain the Covid-19 crisis.

“To recover from this pandemic, we must take aggressive action to manufacture, distribute, and administer vaccines, testing, and personal protective equipment in an equitable way,” the president-elect said in a statement. “These individuals are deeply qualified and will restore public trust in the pandemic response by leading with facts, science, and integrity.”

Choucair, Johnson and Manning will report to Zients. The positions are full-time White House roles, a transition official said.

Zients told POLITICO that the incoming Biden administration will look to Congress to support its agenda.

Biden also named additional members to his Covid-19 team, bringing back a slew of familiar faces from the Obama administration and health policy circles.

Sonya Bernstein, who served as deputy chief of staff for former HHS Secretary Sylvia Mathews Burwell, will be a senior policy adviser on the Covid-19 team. Before joining the transition, Bernstein was an assistant vice president at NYC Health + Hospitals.

Cyrus Shahpar, who worked on global rapid response at the Centers for Disease Control and Prevention, will be the Covid-19 team’s data director. Before joining the transition, Shahpar was VP for Epidemic Intelligence at Resolve to Save Lives, an initiative led by Tom Frieden, who served as CDC director during the Obama administration.

Eduardo Cisneros, who served in the Labor department during the Obama administration, will be the Covid-19 team’s intergovernmental affairs director. Cisneros currently works on civic engagement and government relations at AltaMed Health Services and previously worked at SEIU Healthcare, among other roles.