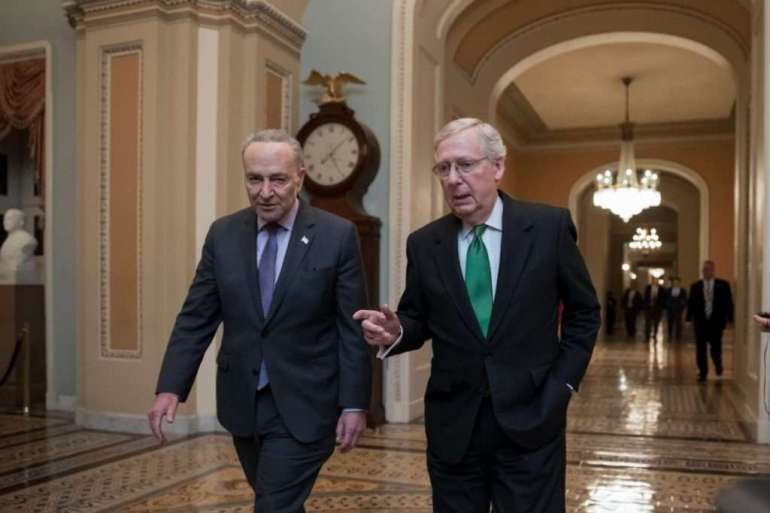 Schumer has had little time to prepare: Democrats didn’t win the majority until the Georgia runoffs in January. And the day Schumer learned he got the job, the Capitol was invaded by pro-Trump rioters. His time to soak in the good news was limited to just a few hours.

That timeline has meant a crash course in leading the Senate alongside a Democratic White House and House. Schumer is battle-tested from overseeing a generally united minority during the Trump years, though maintaining unity as majority leader is always more challenging.

And with McConnell holding out on the Senate’s organizing resolution, the degree of difficulty for Schumer has become that much higher.

“Sen. McConnell’s been the minority leader before. Sen. Schumer has never been majority leader,” added Sen. Roy Blunt (R-Mo.), a member of GOP leadership. “One is coming at this with a little more time to think about what exactly that job entails than the other one.”

Schumer so far is making it clear that he’s not caving to McConnell’s demand to include protecting the legislative filibuster as part of any power sharing agreement. During a private caucus call Thursday, Schumer told members he was optimistic that he’d reach a deal with McConnell, according to a source on the call.

On the floor on Friday, he called McConnell’s proposal “unacceptable.” He also spurned McConnell’s request for a delay of Trump’s trial into mid-February, then later in the day reached a deal with the GOP Leader to begin the trial the week of Feb. 8.

Those moves have been seen within the caucus as a sign of strength.

“Chuck Schumer will continue to refuse to allow the minority to dictate how the majority is going to operate,” said Sen. Jeanne Shaheen (D-N.H.).

Meanwhile, the pressure on Schumer from the left to scrap the filibuster is only increasing as Republicans dig in for big policy fights with the new Democratic majority.

Just Democracy, a coalition of more than 40 minority-led organizations, is launching ads in New York’s Times Square calling on Schumer to eliminate the filibuster, according to details first shared with POLITICO. The ad urges Schumer to “abolish the filibuster” and quotes Rep. Alexandria Ocasio-Cortez (D-N.Y.) describing it as “a cherished tool of segregationists.”

Separately, Fix Our Senate, a group created to target McConnell, is also running a full-page ad with other advocates in this weekend’s New York Times calling for the elimination of the filibuster. Senate Republicans say Schumer is facing an early squeeze between the bipartisan bromides of Biden and the voices in his own party pushing him to run over Republicans as quickly as possible.

“What [Schumer] wants to do is have this hang over our heads like a sword of Damocles for some future event and I think it’s smart to get this matter resolved on the front end,” said Sen. John Cornyn (R-Texas), a close McConnell ally. “I understand, too, the political pressure that President Biden and Schumer have with the progressives and looking at getting primaried by AOC.”

But even if Schumer wanted to get rid of the filibuster, he’d have to overcome objections from moderates and possibly Biden himself.

Schumer’s immediate top three priorities are filling Biden’s Cabinet, conducting the impeachment trial and passing a big coronavirus relief package. But Republicans have resisted each of those to varying degrees, despite Biden’s hopes of working with the GOP.

At some point, Democrats may grow frustrated enough to scrap the filibuster. But for now the fallback plan on a stimulus measure is budget reconciliation, which evades the supermajority requirement but comes with some limits.

“I think we work through the committees until we can’t,” said Sen. Sherrod Brown (D-Ohio), a progressive senator poised to take over the Banking Committee. “We keep trying until it doesn’t work. And then we do reconciliation.”

Democrats say that they have no illusions about McConnell. But they’re also hoping that his personal relationship with Biden may lead to more cooperation than under former President Barack Obama. McConnell so far has worked with Democrats to ensure Biden’s national security nominees are confirmed, although the pace lags behind most previous presidents .

“We have a feeling that he does have a good personal relationship with Biden that’s going to be helpful,” said Sen. Tim Kaine (D-Va.), who shrugged off McConnell’s attempt to influence Schumer in his early days as majority leader. “Chuck’s negotiating from a position of strength right now.”

The fact that McConnell asked for a longer delay on the trial as well as concessions on how to run the Senate smacks to some Democrats as McConnell still trying to be majority leader, even though now it’s Schumer’s time. Just as Schumer’s adjusting to leading the majority, Democrats say it may take some time for McConnell to take his hands off the wheel.

“I know it’s hard for him to settle into his new role, but you can’t be the majority leader if you’re the minority leader,” said Sen. Chris Murphy (D-Conn.).