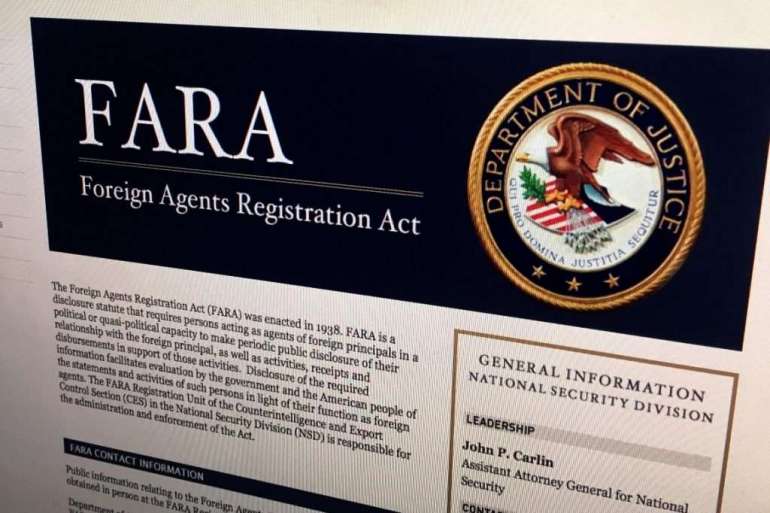 Michael McKenna, a former lobbyist who worked in Trump’s White House legislative affairs office, said he had no intention of lobbying for foreign governments but thought other former Trump administration officials would jump at the chance.

“I’m pretty confident that a bunch of people would absolutely love to represent Monaco, France, the United Arab Emirates,” he said.

Trump’s “lifetime ban” on former officials in his administration representing foreign governments was part of his 2016 campaign pledge to “drain the swamp” in Washington. He even criticized President Bill Clinton for revoking his own ethics rules right before leaving office two decades ago, arguing Clinton had “rigged the system on his way out.”

“He is undoing really the only example of policy that was supposed to evidence his commitment to drain the swamp,” said Robert Weissman, the president of Public Citizen, which advocates for tougher ethics rules.

The Foreign Agents Registration Act requires those who lobby for foreign governments and political parties — along with some other foreign interests — to disclose their work with the Justice Department. Several prominent Trump allies failed to do so, ensnaring them in Special Counsel Robert Mueller’s investigation of Russian interference in the 2016 election and other federal investigations. .

Paul Manafort, Trump’s 2016 campaign chair, was sentenced in 2019 to 7 ½ years in prison for failing to register as a foreign agent, among other crimes.

Michael Flynn, Trump’s first national security adviser, admitted to lying to investigators about his role in a lobbying campaign on behalf of Turkish interests, though Flynn wasn’t charged with violating FARA.

And Elliott Broidy, a prominent fundraiser for Trump’s 2016 campaign, pleaded guilty in October to failing to register as a foreign agent even though he knew he should’ve done so.

There’s nothing illegal or even unethical about lobbying for foreign governments, but many lobbyists try to avoid representing countries that have tense relationships with Washington or troubled human rights records. Two lobbying firms cut ties with Turkey late last year after Turkey aided Azerbaijan in a controversial conflict with Armenia, and several prominent firms quit lobbying for Saudi Arabia in 2018 after the Washington Post columnist Jamal Khashoggi was murdered in the Saudi consulate in Istanbul.

But lobbying for foreign governments is one of the most lucrative niches on K Street, and Trump-connected lobbyists who registered as foreign agents thrived in Washington during his administration, earning millions of dollars lobbying for the governments of countries such as Turkey, Zimbabwe and the Dominican Republic.

Gotham Government Relations & Communications, a New York lobbying firm that once counted Trump as a client, capitalized on the connection after Trump’s 2016 victory, opening a Washington office and signing clients including the Libyan government. Like others on K Street, the firm is now trying to reposition itself for the Biden era.

Earlier this month, the firm sent a memo to several foreign governments and other potential clients highlighting its ties to a different New York politician: Senate Majority Leader Chuck Schumer.

“Our Washington D.C. office stands ready to advocate for you with the Senate Majority office of the Honorable Charles Schumer!” the memo reads.

But the rules did include significant limitations, prohibiting former Trump administration officials from lobbying the agencies in which they served for five years after leaving the government.

Now that Trump has revoked his ethics pledge, they’re mostly free to lobby the executive branch. (Those who’ve left within the past year are still prohibited by law from trying to influence their former agencies.)

Some on K Street have cheered Trump’s decision. “It puts a number of people who were on the sidelines [back] in the game,” said one lobbyist whose firm has hired former Trump administration officials.

But others are skeptical staffers from the previous administration will have much sway.

“I’m not sure the Biden people are going to want to be lobbied by us,” said one former Trump administration official who’s now a lobbyist, who spoke on condition of anonymity.

Former Trump administration officials are also now free to lobby Republican lawmakers on behalf of foreign interests — but demand for such work will be softer with Democrats in control of Congress, said Ivan Zapien, who leads Hogan Lovells’ government relations and public affairs practice.

“There’s not many world leaders who are trying to figure out how to deal with Republicans right now,” Zapien said.

Some ethics lawyers said Trump’s lifetime ban on foreign lobbying might have been excessive. (The ethics rules Biden debuted on Wednesday only bar those who serve in his administration from representing foreign governments until Biden leaves office or for two years after they leave government, whichever is later.)

Would the contacts former Trump administration officials made in government still give them a lobbying edge in 20 or 30 years?

“It sounds really good, there’s no doubt about it,” said Tom Spulak, a Washington lawyer who’s advised clients on the Foreign Agents Registration Act and has also lobbied for foreign interests himself. “But is it really serving a purpose?”

But Paul Light, a New York University professor who has criticized lengthy lobbying bans in the past, said he couldn’t support Trump’s last-minute repeal after all the ethics scandals during his administration.

“I don’t think Donald Trump is the right person to undo any ethics rule,” he said.