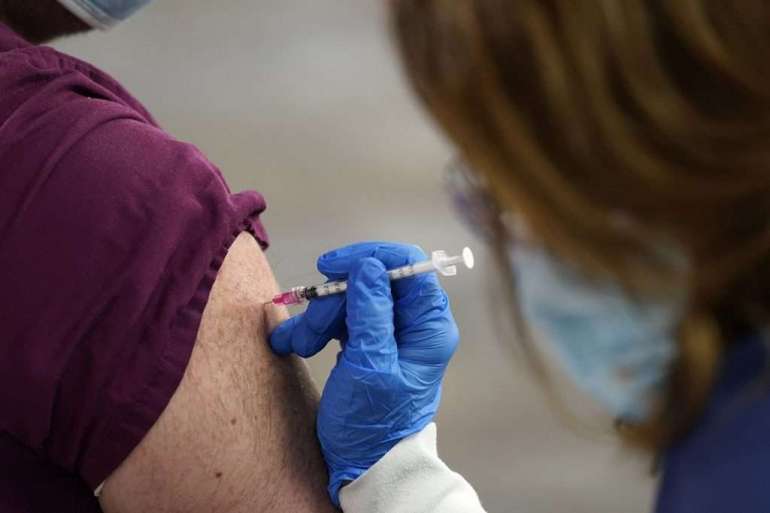 The digital efforts underscore the urgency of the vaccination effort, as more doses gradually become available and health experts fear new, more contagious variants of the virus could spread more widely and overrun health care systems. The grassroots campaigns are also a notable shift away from the Trump administration’s plans for a coronavirus ad blitz featuring celebrities, which was canceled last fall amid scrutiny. President Joe Biden has promised his own massive “science-first” federal campaign to promote vaccinations and public health measures.

“Our governor has a lot of campaigns, and they provide materials for us — they’re all slick and pretty, lots of graphics and color. And I don’t use them, mainly because the voice in which they talk isn’t the voice of the community we serve, and they can tell,” said Kasi Woidyla, who’s organizing a vaccination campaign for Virginia Garcia Memorial Health Center, an Oregon health clinic that serves many migrant farm workers and their families.

With little guidance from state or federal officials on the best strategies for promoting vaccines on social media – or how to navigate anti-vax trolls prevalent on those sites — campaign organizers acknowledged messaging can be inconsistent and hard to scale up quickly. They said they often calibrate messaging in real time to determine what appeals will resonate with people not sold on the shots.

“We’ve basically become A/B testers like marketing people,” said Alison Buttenheim, who is helping develop messaging for clinician-driven campaigns in Philadelphia. The strategy, she said, often comes down to: “Let’s try this on 30 people and see what happens and see what we can change.”

Polls have found that there is growing confidence in the Covid vaccines as more people are inoculated. Nearly 28 million in the United States have received at least the first dose of either the Moderna or Pfizer vaccine, though initial data shows that Black Americans are getting vaccinated at far lower rates than whites. The two available vaccines have been found to be very effective, with no safety concerns arising since they were authorized over a month ago. At least one more vaccine from Johnson & Johnson will soon seek authorization after the company on Friday reported its shot was 66 percent effective in a global study.

Some large, well-funded health systems are investing in tech tools to bolster their digital campaigns. Kaiser Permanente, the California-based health system operating in eight states and Washington, D.C., has started using online marketing tech to identify the “micro-influencers” on Facebook, Instagram, TikTok and Twitter who have active local followings.

Public Good Projects, a nonprofit that specializes in public health campaigns and is working on the Kaiser effort, will pay some micro-influencers to post about why they’re planning to get the vaccine and other similar topics. Payments per post can be anywhere between tens to hundreds of dollars, depending on number of followers and level of engagement, said the nonprofit’s CEO, Joe Smyser. The nonprofit insists people who receive payments must disclose that information with their posts.

Smyser said his organization has already gained experienced tapping social media networks to promote public health measures during the pandemic. The organization uses “off-the-shelf marketing software” to find social media users who are already influential in their communities, whether it’s for local activism or beauty blogging.

They may have as many as a few hundred followers or tens of thousands — both types of users can help spread messaging. The important thing is that their posts convey authenticity, Smyser said.

“Getting them to talk in their own way … is what we have found to be really effective,” he said.

Rose Marie Leslie, a resident at the University of Minnesota, amassed millions of views on several several TikTok videos from her personal account where she described common side-effects she experienced after receiving both doses of a Covid-19 vaccine. Leslie, who now has almost 868,000 followers on the platform, said it was important to confront any misconceptions people might have about vaccines.

“My goal with these videos is to say, ‘Hey, I’m a doctor, I got the vaccine, here are the side effects that are expected, here’s why we expect it,’” she said. And, she added, “it was so worth it.”

Vaccine-related posts also can attract armies of anti-vaxxers who have spread misinformation on those platforms for years. Smyser of Public Good Projects advises people participating in the group’s vaccination campaign they can ignore or engage the trolls as they see fit. His group also commands a social media army that comes to users’ defense when they’re attacked by anti-vax accounts.

Big tech companies, who have been under pressure to purge anti-vaccine content from their platforms, are also beginning to work more directly with health systems to push out science-based vaccine information. Several systems have contacted YouTube for guidance on starting their homegrown video campaigns, said Garth Graham, the platform’s new global head of health care.

“The strategy we think about is, ‘How do we reach people who can reach people?'” Graham said.

But the most effective online messages will still likely come from local doctors, said Brian Castrucci, head of the de Beaumont Foundation. The group, which focuses on improving community health, partnered with GOP pollster Frank Luntz last month to identify phrases most likely to improve vaccine acceptance, finding that messaging about protecting a person’s family was more motivating than doing the “right thing.”

“This goes back to really personal contact, and talking to people,” Castrucci said.

But often the people who need the most reassurance about vaccines are hardest to reach online, said Woidyla of the Oregon heath clinic.

“No access to WiFi is a big barrier for our patient base,” she said. “So saying we’re going to have a Zoom Q&A session — ‘Well, that’s lovely, but I don’t know how I would get on that.’”