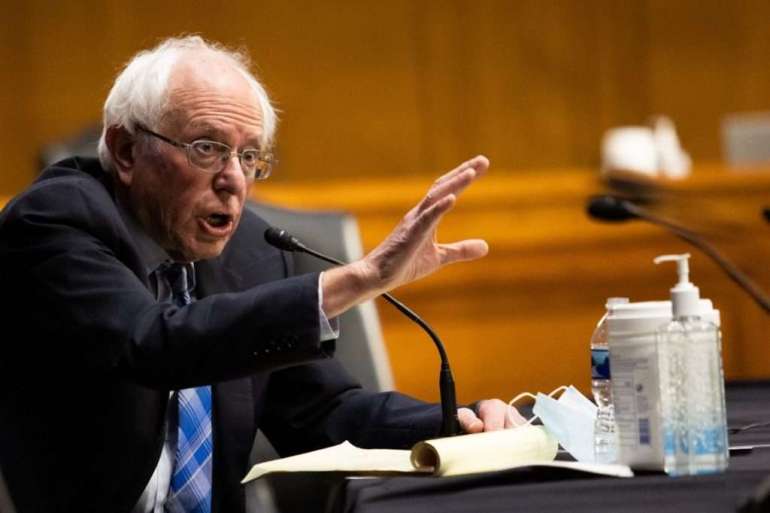 Sen. Joe Manchin (D-W.Va.) has said he opposes a $15 minimum wage, Sen. Jon Tester (D-Mont.) said he’d like to see changes made and several other Democrats have been noncommittal. But Sen. Bernie Sanders (I-Vt.) said in an interview Wednesday that he was confident he would have the votes to move forward on the minimum wage hike through reconciliation, a procedure that would require only a simple majority for passage: “I believe we do.”

The issue could come up as soon as Thursday in the Senate’s vote-a-rama — the marathon process of voting on amendments to the budget bill — according to two sources familiar with the matter. Though that would be a nonbinding roll call, likely forced by Republicans, it would be the first time Democrats go on the record regarding the $15 hourly wage question.

The last time Congress passed legislation to raise the minimum wage was in 2007, to $7.25 an hour. It’s possible this time around that Democrats may have to settle for less than Biden’s initial proposal of gradually scaling up to $15 an hour by 2025. Currently, 29 states and the District of Columbia have minimum wages greater than the federal minimum wage of $7.25.

“The details matter in how you do this, and what’s the timeline. In different communities, the economies are different,” Kelly said in an interview. “I’ll have to look at the details of what comes to the floor on the minimum wage.”

Senate Majority Whip Dick Durbin (D-Ill.) said leadership has yet to whip the $15 minimum wage provision. “I’m sure we’re going to have to talk about it before we call that,” he said. “And find out where everybody stands.”

The Senate parliamentarian, who will weigh in on whether the bill follows longstanding budgeting rules, is another potential hurdle. Sanders and other proponents of the $15 minimum wage argue that the increase would reduce the amount of federal assistance that low-income individuals receive and increase their taxable income — meeting the parliamentarian’s criteria that any reconciliation measure have an impact on the federal budget.

Advocates for the $15 minimum wage are planning to cite reports from the left-leaning Economic Policy Institute and the University of California, Berkeley that found that raising the minimum wage to $15 by 2025 would reduce government spending on public assistance programs and increase tax revenue. The Congressional Budget Office is expected to also soon release a report at Sanders’ request that will make the case for $15 an hour.

A senior Democratic aide said that conversations with the parliamentarian can only occur after the budget resolution is passed, which will likely occur Friday morning. The Senate can then litigate the issue.

The $15 minimum wage is a non-starter for Senate Republicans, who argue that it will hurt small businesses and lead to job loss. In addition, Republicans say that states are better suited to determine wage increases. That’s led Democrats to include the provision in the coronavirus package, which can pass without GOP votes under reconciliation. While Democrats could put a standalone bill on the floor, Senate Republicans would filibuster it.

Republicans said Wednesday that they were skeptical the Senate parliamentarian would greenlight Democrats’ plan.

“The budget’s not a vehicle to pass substantive legislation and I think that’s going to come as a rude shock to them,” said Sen. John Cornyn (R-Texas).

Manchin said on MSNBC that he supports raising the wage to $11 and indexing it but that it doesn’t make sense in budget reconciliation.

“This is not the place to do it,” he said. “The minimum wage hike I do not believe will fit in there at all.”

“I think the Democrats are united,” said Brown, a progressive who visited with Biden at the White House Thursday. “No, we won’t be divided. Yes, we will do it.”

Some senior House Democrats have predicted that the minimum wage provision could be stripped after it passed the House. On Wednesday House Majority Leader Steny Hoyer (D-Md.) conceded some things may not be “eligible for consideration of the reconciliation process.”

But Sanders so far is showing no sign of doubt. The Vermont Independent said Wednesday that he has “several lawyers” working on the case for the Senate parliamentarian.

“We think that raising the minimum wage will have a broad impact on the federal budget in many, many, many areas,” he said. “So we do think we can make a very, very strong case that is consistent with the reconciliation process.”

Quint Forgey and Heather Caygle contributed to this report.