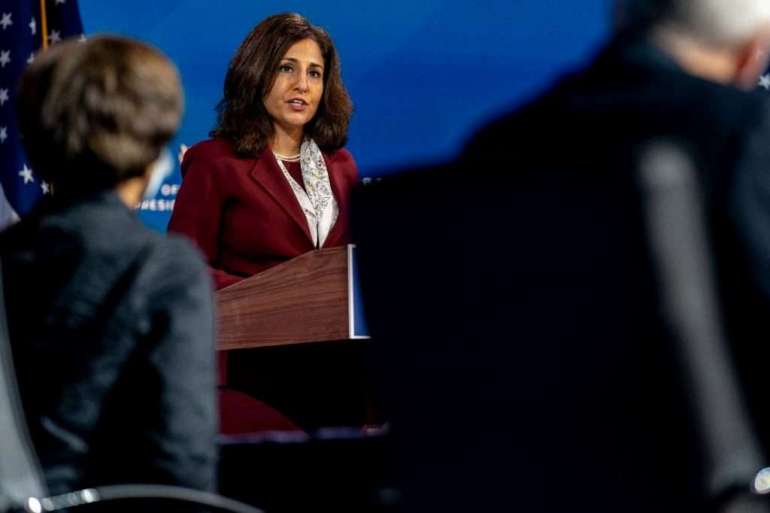 “At school, I remember being the only kid in the cafeteria line who used ten-cent vouchers from the Free Lunch Program,” she will testify. “Within just a few years, my mother found a job, and a few years later she was earning a middle class salary. Soon, she was able to buy a home, and eventually see her children off to college and beyond. I spend every day of my life grateful for a nation, and a government, that had faith in my mother and in me — that invested in our humanity and gave me a fair shot to pursue my potential.“

Republican criticism: While Tanden is expected to face an easier path to confirmation now that Democrats hold a narrow majority in the Senate, she will almost certainly face tough questions from Republicans about her role as a longtime partisan advocate with a public history of criticizing the GOP on social media. Now president and CEO of the Center for American Progress, Tanden will acknowledge the distinction between her job as head of the liberal think tank and the position Biden has nominated her to fill as one of the nation’s top public servants.

“Over the last few years, it’s been part of my role to be an impassioned advocate. I understand, though, that the role of OMB Director calls for bipartisan action, as well as a nonpartisan adherence to facts and evidence,” she will say. “I would vigorously enforce my ironclad belief that our government should serve all Americans — regardless of party — in every corner of the country.“

Democrats are likely to pepper Tanden with questions about transparency at the agency after four years of Trump administration budget actions that frequently broke precedent and proved legally dubious, while Democrats’ demands for information often went unanswered.

Stakeholder support: Democrats are also expected to highlight the outside groups that are advocating for Tanden’s confirmation. An aide for the committee noted that Tanden has received “broad stakeholder support, including from the U.S. Chamber of Commerce, because they believe she is well qualified to help families, small businesses, seniors and other Americans.”

In a statement to the committee ahead of the confirmation hearing, the Chamber of Commerce’s top liaison to Congress said the group supports her confirmation and that “while we may not always agree with Ms. Tanden, we anticipate that she will have an open door and an open mind as Director.”

“Ms. Tanden is well-qualified to lead OMB and brings an established track record of engagement with the business community,” Jack Howard wrote on behalf of the nation’s largest lobbying group. “Ms. Tanden has proven a frequent partner and collaborator, particularly on international trade issues. Her willingness to consider different perspectives will be important as she shapes the budget and policy proposals for the Biden Administration.”

What’s next: Tanden will also appear before the Budget Committee on Wednesday morning. Both panels must approve her nomination before Senate leaders can schedule a floor vote.

If confirmed as director of OMB, Tanden will play a central role in the Biden administration’s fiscal and regulatory response to the country’s health and economic crises.