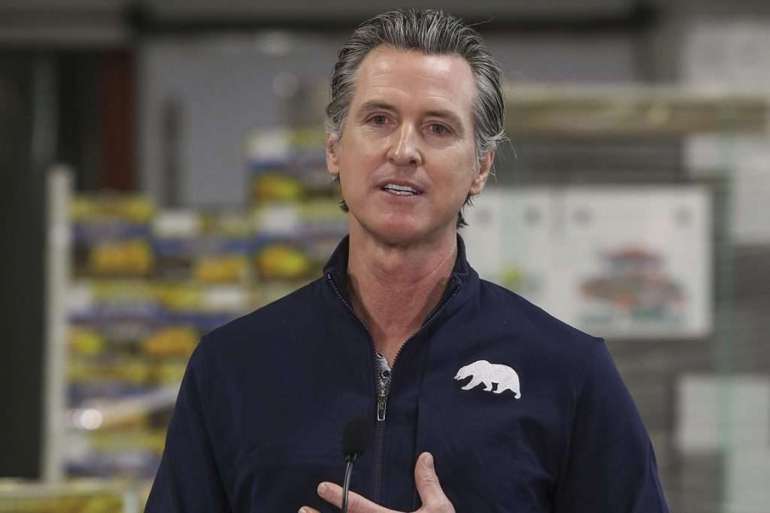 “Even as we grieve, let’s allow ourselves to dream of brighter days ahead,” Newsom said, heralding an approaching time when listeners could “visit your parents again, go to your daughter’s basketball game, show up for shift work without fearing infection.”

Unlike Newsom’s first two State of the State speeches, the Tuesday evening address contained few policy proposals. Instead, the governor conveyed a message of shared sacrifice tempered by hope for the months ahead. He honored frontline workers and victims while arguing California would rebound by aiding the “millions of Californians pushed out of the workforce and essential workers with no choice but to keep showing up.”

In another first, the governor accompanied his State of the State address with pictures of front-line workers and video of state efforts combating the pandemic. Legislators appeared on a virtual meeting split-screen.

“Covid was no one’s fault, but it quickly became everyone’s burden,” Newsom said, noting later that “in 2020, we simultaneously faced two once-in-a-generation crises when we combated the worst wildfire season in our state’s history in the middle of the pandemic.”

Newsom’s political fortunes have tracked the virus’ trajectory over the last year. Early praise for his aggressive moves to contain its spread turned into frustration as schools remained closed and many Californians chafed under fluctuating restrictions. Those dynamics have propelled an effort to recall Newsom to the brink of qualifying for the ballot. Proponents said Sunday that they have collected nearly 2 million signatures, which they believe is more than enough to clear the 1.5 million valid signature requirement.

On Tuesday, he offered some flashes off humility as he acknowledged falling short at times, saying “our progress hasn’t always felt fast enough” and “I’ve made mistakes.” He conceded that his restrictions have burdened residents.

“People are alive today because of the public health decisions we made — lives saved because of your sacrifice,” Newsom said. “Even so, I acknowledge it’s made life hard and unpredictable, and you’re exhausted with all of it.”

But the state’s picture is improving rapidly. Hospitalizations and viral transmissions have dropped sharply after nearly two months of stay-at-home orders and as more Californians get vaccinated. The Newsom administration has broadened the path for counties to reopen schools and businesses. Last week, California announced a timeline for residents to return in person to outdoor sporting events, concerts and theme parks.

Newsom has touted California’s progress in stops at vaccination sites around the state in recent weeks. While the governor studiously avoids commenting on the recall, the press conferences can have the feel of campaign events even as allies praise Newsom’s stewardship. Newsom referenced that statewide tour on Tuesday night, and his address lent a similar opportunity to highlight declining infections and a raft of state assistance programs.