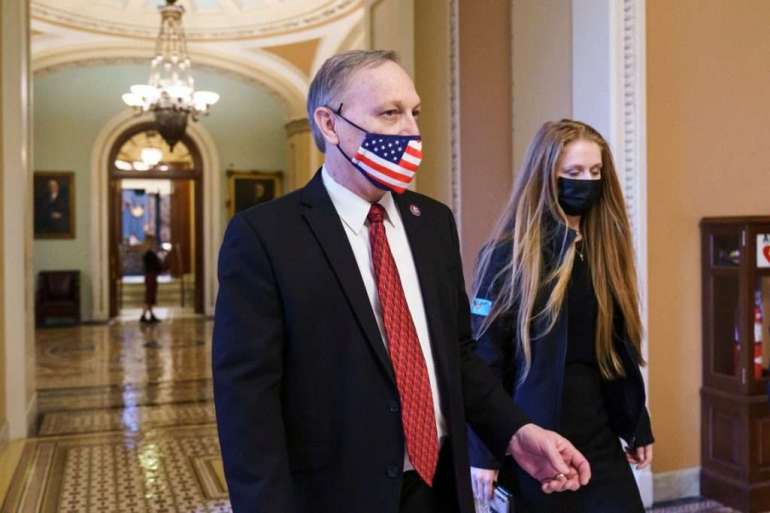 Those internal divisions are small-scale for now, particularly since Republicans are still in the minority. But some Freedom Caucus members are starting to raise concerns about their ability to stay united if the GOP wins back the House next year, which was key to their past success.

“We’ve got to get back to collegial operations here. Some of the rhetoric needs to die down. I’m really ready for us to work together,” the second Freedom Caucus member said. If group members’ floor delaying tactics go “on much longer,” this House Republican added, “I’ll probably share my opinion” with Freedom Caucus leaders.

Initially formed as a hard-right irritant to GOP leadership, the Freedom Caucus later became a club for Donald Trump’s most loyal supporters. In the post-Trump era, the group will face its own questions about its broader direction, especially as it gears up to elect a new leader this fall. Biggs will be term-limited by the end of this year and is also considering an Arizona Senate bid.

“There’s some real concern among the Freedom Caucus that it lacks a long-term vision,” said a senior GOP aide with knowledge of the caucus politics. “There doesn’t seem to be an organized legislative plan or agenda — only sporadic press conferences and news releases. It could be argued that this … has divided the caucus more than ever before.”

McCarthy has worked hard to make inroads with the Freedom Caucus, who once blocked his bid for the speakership. If Republicans seize back the House and McCarthy continues to lead the GOP, it’s unclear what the Freedom Caucus’s role — and relevance — will be inside the bigger conference.

Some foresee a potential schism in which Freedom Caucus rebels, such as Biggs and Greene, continue to throw bombs in an effort to torment leaders. Biggs recently clashed with McCarthy behind closed doors over his procedural gambits, suggesting the Arizona Republican has little interest in following leadership’s direction.

Workers at an Amazon warehouse in the town of Bessemer have submitted their votes in an election that could shape the fate of Amazon — and the future of the labor movement in the U.S.

But others predict more Freedom Caucus members will pick their spots to challenge leadership and follow in the footsteps of Jordan, who has become more of a team player in exchange for access to McCarthy. The GOP leader gave his blessing for Jordan to serve as the top Republican on the House Judiciary Committee. Now Jordan says he won’t challenge McCarthy for speaker or leader, underscoring how much the icy relationship between the former rivals has defrosted.

McCarthy also sought to defend Greene, a newly anointed Freedom Caucus member, when Democrats kicked her off her committees earlier this year. But even though the Freedom Caucus’ political arm recruited Greene to run in her district, some in the group initially blanched at endorsing her candidacy, according to multiple sources. Rep. Jody Hice (R-Ga.), a Freedom Caucus member and former pastor, even withdrew his endorsement of Greene after POLITICO uncovered a string of racist Facebook videos she made last summer.

While there was initially some concern about her joining the group, lawmakers say that dissipated when Greene apologized to the conference behind closed-doors for her inflammatory rhetoric. Despite her divisive past behavior, she has now become one of the faces of the caucus’ delay tactics, jumping at the chance to force repeated motions to adjourn and blasting her Republican colleagues who have opposed the effort.

“She caused some initial consternation amongst members, but they have since reconciled with Marjorie because of her heartfelt apologies,” said the second Freedom Caucus member.