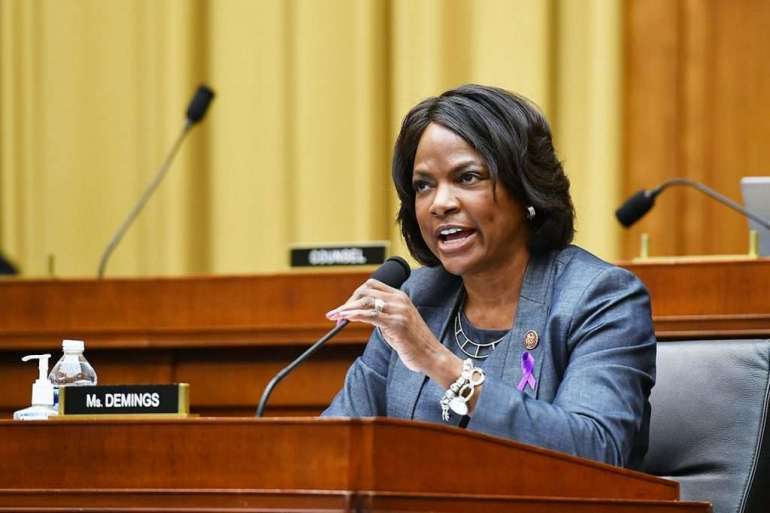 Though Demings didn’t mention DeSantis by name, those familiar with her thinking say she has been increasingly disturbed with his hard-right style of governance, including an anti-protest bill he recently signed into law.

As a former top police officer and a Black woman, Demings occupies a unique space in the nation’s political dialogue over race and policing, an issue that was brought into sharp focus Tuesday when Rep. Jim Jordan (R-Ohio) interrupted her as she criticized Republicans for pretending to support law enforcement when they tried to amend a hate crimes bill to prevent police departments from being defunded.

“Val Demings has proven she can stand on the national stage, whether it’s as a House impeachment manager or a possible running mate for Biden or taking on Jim Jordan,” said Fernand Amandi, a pollster and Democratic consultant from Florida.

Amandi said Demings’ biography make it all but impossible for Republicans to paint her as a “radical socialist” in the same way that DeSantis did in his narrow 2018 win over Andrew Gillum, the Democratic Party’s first Black statewide nominee and its most top-of-the-ticket progressive candidate. The close losses by Gillum and Sen. Bill Nelson in 2018 — followed by Donald Trump’s big win in Florida in 2020 — has made national Democrats increasingly wary about pumping tens of millions into Florida after coming up empty in recent races.

Even the most optimistic Florida Democrat knows that a statewide campaign in Florida will be difficult in 2022. In midterm elections, Democratic base voters have historically had weaker turnout than Republicans. Also, the party that controls the White House typically fares poorly in midterms, giving the GOP an additional advantage next year.

Incumbents are also notoriously difficult to unseat in the state, and DeSantis has strong support from his base as he becomes a national GOP figure. For his part, Rubio is seen as a tough-to-beat general election candidate.

State Agriculture Commissioner Nikki Fried, the lone statewide Democrat, is positioning herself to run against DeSantis, as is Democratic Rep. Charlie Crist, a former governor. Rep. Stephanie Murphy, Demings’ fellow Orlando Democrat, is eyeing a challenge against Rubio. The Orlando area is expected to get a new congressional seat in 2022, which could factor into Demings’ or Murphy’s decision to seek reelection of run statewide.

Demings didn’t mention Fried or Murphy in discussing her plans but said she feels she has to make a decision soon about a 2022 statewide race.

“It’s next year, right, and so I’d need to make that decision soon for sure by mid-year. And we’re almost there now,” she said. “Let’s see what the landscape looks like, but there are a lot of people in my home state who want me to run statewide.”