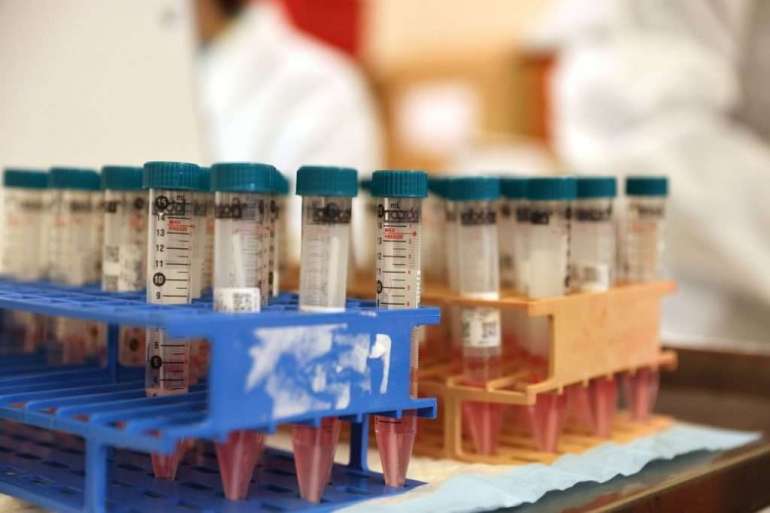 The next few months will determine whether Novavax can overcome its bumpy start and deliver on those increasingly high expectations. The company has enlisted production partners worldwide after struggling to scrape together the tens of thousands of doses needed for its clinical trials. Those hired factories are still getting up to speed with Novavax’s vaccine technology, which uses moth cells to brew batches of the coronavirus spike protein. In non-pandemic times, such retrofitting can take years. The company is aiming to pump out 150 million doses a month by the second half of the year.

“I do think it’s going to play a larger role,” said Lawrence Gostin, a global health law professor at Georgetown University. “In the short to medium term, at least, the Johnson & Johnson vaccine has taken a reputational hit and people are more hesitant to take it. In addition, J&J has had major production problems at its Baltimore plant. And as a result I think Novavax is going to be a reasonably significant player.”

U.S. officials have not factored the vaccine into their Covid-19 response plans just yet, despite the early Phase III trial results from the U.K., released in March, that put the Novavax shot on par with vaccines from Pfizer and Moderna. The Biden administration still has questions about how quickly the company can scale up production and fulfill the United States’ 100-million-dose order, said one senior administration official.

The administration’s caution stems in part from the recent troubles of Johnson & Johnson and AstraZeneca.

A J&J contractor contaminated 15 million doses of the company’s shot this spring, halting U.S. production for the near future. And regulators in the U.S. and Europe have recently launched investigations into potential links between the J&J and AstraZeneca shots amid reports of rare but severe blood clots. The European Union has since opted out of purchasing further doses of either vaccine.

For the U.S., the Novavax shot could serve as an insurance policy in case supplies of the two mRNA vaccines — the workhorses of the country’s vaccination push — or the J&J shot falter. But many countries are not so fortunate. Thirty one percent of the billion vaccine doses administered worldwide have gone to North America, and just under 2 percent have gone to Africa.

India’s Serum Institute is expected to produce more than one billion doses of the Novavax shot this year, with most of them going to COVAX, the global vaccine equity effort that aims to supply the world’s poorest countries. COVAX organizers say they have deals for about 1.1 billion doses of the Novavax shot, nearly on par with their orders of the AstraZeneca vaccine.

By contrast, Pfizer has pledged only 40 million shots to COVAX this year and Moderna is still in talks with the facility. Many of their individual deals are with European countries. Johnson & Johnson has pledged 500 million doses of its one-shot vaccine to COVAX, but most of them are expected in the last three months of the year.

COVAX is counting on the Novavax shot to meet its target of providing vaccines for at least a fifth of participating countries’ populations by the end of the year, said Mesfin Teklu Tessema, a senior director at the International Rescue Committee who is a member of a civil society working group for COVAX. “If that [would] face a challenge, it would be a big setback for COVAX in terms of delivering doses in 2021,” he said.

The Serum Institute plans to start stockpiling Novavax doses this month and could seek authorization for the vaccine in India as soon as the FDA clears it for use in the United States. Meanwhile, South Korea aims to begin local production of the vaccine in June.

Gregory Glenn, Novavax’s president of research and development, told POLITICO that the company has built one of the largest vaccine–production networks worldwide over the last year. It includes factories in Italy and the Czech Republic, and partnerships with South Korea and Japan’s Takeda Pharmaceuticals along with the Serum Institute deal.

But those efforts have run into manufacturing problems. Serum Institute CEO Adar Poonawalla warned in early March that a temporary U.S. restriction on raw materials such as bags and filters could limit its ability to produce the shot. The policy has already hampered the company’s attempt to pump out as many doses as possible of the AstraZeneca vaccine amid India reporting world-record daily infection numbers.

After pressure amid a wave of infections and deaths that has overwhelmed hospitals and crematoriums in India, the White House said on Sunday that it has found some sources of raw materials that will be made available to India for vaccine production. But it is not clear how quickly the Serum Institute and others will be able to ramp up their output.

And earlier this month, Novavax CEO Stan Erck told the U.K.’s Observer that a shortage of 2,000-litre bags in which the vaccine cells were grown was a significant hurdle for global supply. Still, Erck said he was confident the company and its production partners in Britain had enough bags to manufacture the vaccine.

The firm also faces questions about how well its vaccine performs against key virus variants spreading worldwide. The Novavax shot was just 55.4 percent effective against the B.1.351 variant, first found in South Africa, during a mid-stage trial in that country. More data on the vaccine’s performance against different variants could be released when Novavax files for use in the U.S. or Europe.

While many experts see the nimble mRNA technology that underlies the Pfizer and Moderna vaccines as the way of the future, Novavax executives maintain that it’s relatively simple to modify their vaccine to target different or multiple strains of the coronavirus.

They are banking on the likelihood that their shot, and many others, will be needed for years to come, as health officials seek boosters or variant-targeting edits to existing shots.

“Everyone will need to be boosted,” said Glenn. “This is a viral respiratory disease, and we know from the flu that immunity from an infection is good for maybe 12 months, maybe 18 months, and after that people become susceptible again. After that, we’re going to have to boost.”